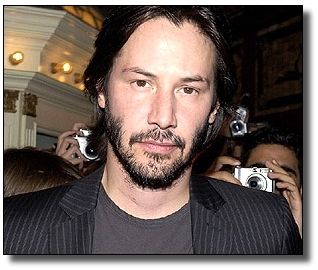 Keanu Reeves has played many roles in his time - the messiah, Buddha, one half of a rock duo that brings about world peace - so he's clearly a man in touch with his spiritual side. That's why he's so perfectly cast as a guru orthodontist in this week's Thumbsucker, the little indie movie that could. We talk to the former Mr. Ted Theodore Logan Esq. about smoking, getting older and robbing banks.

What's Thumbsucker about? Lou Pucci plays Justin, a teenager who still sucks his thumb and the film is all about how he tries to overcome it and the way it affects his family and friends. I play a transcendental dentist who offers him hypnosis to give him strength.

Do you have any horror dentist stories?
I had two of my wisdom teeth pulled out in Toronto when I was younger. And I'll never forget the sound of the pliers and the knee in my chest. It was nasty.

Did you suck your thumb as a kid?
I have not and have never been a thumb-sucker. I did everything else.

Were there any behavioural habits like thumb-sucking that you tried to let go when you were younger?
No. When I was a teenager, I always fantasized about robbing a bank. I mean, it just sounded like fun what with all the plotting and planning, the danger, the treasure.

What was it about the Thumbsucker script that made you want to play a dentist?
It was the humanity of the story. The writing was lovely and a lovely role. My character has several incarnations and I loved his search for meaning of life.

Your character smokes in this movie. Do you?
I smoke too much. In some scenes in Constantine, it was like, Watch Keanu turn green. I smoked so much. It was a lot, it was a lot. I should quit.

Are film sets generally bad for your health? What s the worst injury you ve sustained?I was filming The Replacements and I ran into someone I shouldn't have and I got a stinger. It's where your neck compresses and you lose feeling and the use of your arms. ["eek"--krix]
And I had a general sense of pain. I had a two-level fusion: two vertebrae fused in my neck so there was a lot of concern. But I went and had a MRI scan and was fine. When it first happened I was really scared because I d never had a stinger before. You lose feeling in your arms and your hands. That sensation in me was really intense for about 20 minutes and then the limb aspect of it went away in about two hours.

What do you look for when you take a role?
I ' always looking to see a vision, to see what's interesting in the piece. Fifteen years ago I wouldn t have asked Francis Ford Coppola, So how do you rehearse? I wouldn t have done that. But sometimes now I find it interesting before I go into it to speak, to share thoughts and feelings. For example, with Mike Mills on Thumbsucker, I met with him and I went along with his process. It's a matter of getting to know each other.

This is a tiny, independent film compared with some of your previous big studio films like Constantine. What are the main differences?
The resources that come into making a movie don't really impact on the relationships inside, in terms of telling a story, for me. Sometimes resources just mean you get to work on a bigger set. Walking on the set for Constantine is a different day than walking on the set for Thumbsucker. But in terms of working on the role, or coming to work, no, it's not different. I guess the pressure is less.

Justin's mother is hung up on a soap star. When you were an aspiring actor, which star did you want to meet?
When I was about 15, my stepfather directed Kate Jackson, who played Sabrina in Charlie's Angels, in some movie called Thin Ice. I was a PA on that film so I got to meet her. I remember she was interested in the latest Star Wars movie that was coming out. I bought her a soda and we talked about the new movies.

Are you interested in old Hollywood at all?
The last book I read was a biography on Frank Capra. And I've also read a book on D.W. Griffith so once in a while there seems to be moments where I am interested about the old studios.

What's next? Is it true you've been cast in Stompanato, about the mobster boyfriend of screen legend Lana Turner?
Yeah, I'm meeting with Adrian Lyne and Catherine Zeta- Jones to do a reading of some of the scenes. Hopefully we can get that picture made.

You used to play bass in Dogstar. Is that still happening?
No, not any more. I don't play in a band anymore. I have no idea if I ll do it again but I know right now that I don't play in the band. ["sniff!sob!"--krix]

Are you too old for it? Mick Jagger is on the road and he's 63
The guy is a living legend though. That's what he does.

You're now in your 40s. Are you slowing down?
I'm making all the noises that a post-40 man makes. [laughs] I make that walk to the bathroom in the morning. I never used to lean against the wall. [Laughs] I am that guy.

Thanks for sharing such a interesting interview krix!

eeeeeeeeeeeek, stingers ;o
crap, no in a band right now...at least he didn't say ever, never.....ever hopefully she said...
and lol and hugs to his groans in the morning, hmm, something we got in common.

Oh good he brought up the Rolling Stones...I have a recurrent fantasy that he stands in for Bill Wyman sometime...some of those beginning base parts...very hot...I can SO see him as a guest bassist.

I so love this interview and that recurring fantasy of robbing a bank made me giggle.

Posted by: jeanna on October 29, 2005 05:28 AM
What's on your mind?.....
(new here? please read this before commenting)
Remember, this is a fan site.
Keanu Reeves is in no way connnected to this website.
Please do not make a comment thinking he will read it.
Comments are for discussion with other fans.
Thank you.