I suspect Thumbsucker may be hitting Canadian and UK theaters this weekend, check your local listings, y'all.

Peeved Reeves - an article from the Montreal Mirror 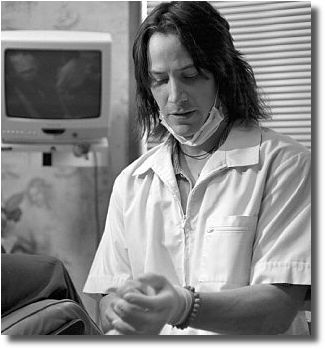 Keanu grunts, groans and scowls his way through an interview about his role in Thumbsucker

Keanu Reeves hates the press. Or so it would seem, as he sits down to talk about his latest film, Thumbsucker, an independent bit of Sundance chic that has the surreally good-looking thespian playing a new-age orthodontist.

One can't really hold it against dear Keanu for hating journalists. After all, it was bottom-feeding tabloid types who gleefully ran with the oft-repeated rumour about his marrying Hollywood mogul David Geffen in a clandestine ceremony. That tall tale got repeated so many times in the early '90s that it almost transcended Hollywood urban legend to become a self-fulfilling reality, much like the one about Richard Gere's gerbil mishap. Geffen finally doused the whole story, stating unequivocally that he'd never even met Keanu.

Then, of course, there are the critics, who have long trashed Keanu's acting style. He is a lightweight poseur, goes the argument, a dude whose career should have sunk long ago, but who stays afloat by the good graces of his looks and little else. (For the record, I think he often delivers carefully minimalist performances that are actually grounded in an intelligent acting process. I predict he'll get his due as an actor in late career, much like Clint Eastwood has. But that's just me.)

Click the extended entry or GO HERE to read the rest of the article...

It doesn't help that Keanu is now sitting at a round table at the Toronto International Film Festival. These round tables allow celebrities to be fast-tracked through a large number of scrums, allowing eight or even 12 journalists to interview a celebrity at once. Simply put, it's the assembly line applied to the interview technique. It sucks, both for the writer and the interview subject. Keanu knows this, and clearly hates it. Which is kinda too bad, given that the film he's here to pump up, Thumbsucker - an unusual tale about a teenage boy whose parents insist he give up sucking on his thumb - isn't a bad movie at all. As well as the Matrix star, the film's kick-ass cast includes Tilda Swinton, Vincent D'Onofrio, Benjamin Bratt, Vince Vaughn and celebrated newcomer Lou Pucci in the lead.

Keanu grunts and groans his way through a series of questions, looking particularly askance at one journalist sitting to his left, an overweight Australian who apparently has not discovered the magical powers of deodorant. "Was this a character you could identify with?" asks one journalist. "Yeah," replies Keanu.

This is perhaps the most insightful part of Keanu's interview. There's a pause, and someone tries to squeeze some juice out of him. "I really enjoyed where he ended up," Keanu says. "And where he started. He's an orthodontist with some ideas about life."

I decide to chime in with what I consider to be a deep thought: "How would you say your craft as an actor has evolved since you began making movies?"

Not knowing my theories about his oeuvre first-hand, Keanu interprets this as an attack, rather than a sincere question. He has taken his barbs, after all. "I know more about it," he responds, icily.

Someone continues, suggesting that with his stoned-out orthodontist role, Keanu appeared to be self-consciously referencing his own career, in particular stoner Ted from the Bill & Ted movies. "That was not intended," insists Keanu.

Then I step in again with the deep thoughts: "It seems like perhaps you were doing a parody of a Keanu Reeves performance..."

And that, as it turns out, is a bit too much for Keanu to take. He clams up. "I'm not saying," he states, while crossing his arms firmly.

With that, director-writer Mike Mills steps in, happy to fill in the gaps. The film, he said, was his own way of reiterating a message he needs to hear himself: that there is no such thing as normal. While his protagonist is a tormented thumbsucker, the lad soon learns that being different really isn't such a bad thing, and rather than fight his purported faults, he should simply embrace them.

Another journalist uses this as a cue to get back to Keanu. Isn't a film like Thumbsucker a perfect reflection of Reeves's own career, given his non-typical status in the business? I mean, Keanu, you're hardly the typical Hollywood guy, argues the journo.

Do you have a career plan, goes another question, or just fly by the seat of your pants?

"Is there anything in between?"

Another journalist attempts to appeal with a softer question: do you prefer comedy to drama?

Keanu brings this round table to a bitter end. "I don't really know. Unless, of course, I'm parodying myself."

I LOVE THIS INTERVIEW..........gad, it has to be hella tedious to do these things, and who can blame him for giving snippy answers to stupid questions...a man only has so much patience!

Keanu is a very self-controlled man, because one might answer to that incautious variety show writer: "Look rather in the bottom of my pants, please; you will find something there". Excuse me - The other allusion to parody is intelligent, but it belongs to Keanu: a parody isn't a simple caricature,it is a literary or music brilliant resumption of some splendid themes or works (also about ourselves);you have to be a great author in that case. This was the proud sense Keanu meant, but those correspondents accustomed to Hollywood's upper middle class couldn't understand his learned reminiscence.

Posted by: vika on October 29, 2005 11:24 PM
What's on your mind?.....
(new here? please read this before commenting)
Remember, this is a fan site.
Keanu Reeves is in no way connnected to this website.
Please do not make a comment thinking he will read it.
Comments are for discussion with other fans.
Thank you.