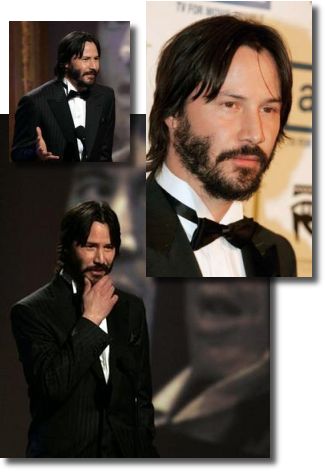 Keanu apparently strapped on the penguin suit last night to appear at the 20th annual American Cinematheque Award gala honoring actor Al Pacino in Beverly Hills. The show will be telecast on the AMC cable channel on January 22.

I have to agree with you on the SHAVE already. He has finally succeeded in annoying me with the out of control facial hair.
Not that I'd throw him out of bed or anything.

Looking so the icon that he is...

RE: SHAVE already - if his hair was cut, (styled, combed, whatever), and he shaved his neck and spruced it up with a little trim, it would be so much better. C'mon Keanu, you're under there somewhere.

Gotta love the penguin. Also gotta agree with Chianti regarding the SHAVE. There's SHAVE and then there's SHAVE, after all.

Slight hijack: Has anyone seen the De Cadenet book photo scanned anywhere? A small version was in the (London, UK) Times magazine at the weekend and I almost cried out when I saw it unexpectedly sitting at my godparents' kitchen table. It's to die. I could try to execute a sneaky scan at work this weekend if no one else has done it?

Never mind - I managed to find it. With love and thanks to the peeps over at keanua-z.com. Loving that photo. If feels just like it should if you were actually lazing next to him.

May be he has some free weeks (it can´t be only days), you know that: no duties-no shaving!

March of the Keanu!

WOW so thats what I look like when I glue RoadKill to my face? I have to stop hanging out with ALF.

Posted by: johnnymoronic on October 27, 2005 11:10 PM
What's on your mind?.....
(new here? please read this before commenting)
Remember, this is a fan site.
Keanu Reeves is in no way connnected to this website.
Please do not make a comment thinking he will read it.
Comments are for discussion with other fans.
Thank you.