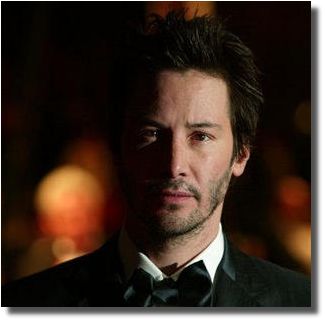 "...as well received as all the guests were, no one quite managed the welcome extended to Keanu Reeves. Taking a leaf out of Johnny Depp’s book, Reeves was last to set foot on the carpet and topped all others with sheer ‘Aiiiieee’ factor. Women wailed, men gazed enviously and, unless Empire was imagining things, more than one pair of pants might have been hurled in his general direction. Keanu takes all such things in his stride, however and breezed across the carpet like a superhuman amid mere computer programs. "It's a bit surreal" was as much of a comment as the supercool star of the upcoming Constantine was prepared to make.

After signing more than his fair share of autographs, kissing fans and probably curing the lame, Saint Keanu waved to the crowd and entered the Odeon Leicester Square, allowing proceedings to get underway."

"After signing more than his fair share of autographs, kissing fans and probably curing the lame, Saint Keanu waved to the crowd"

You know I've been calling him Saint Keanu for a while...those copycats at Empire!!

This is gorgeous...hope I get to at least see the red carpet. BBC America is showing the whole BAFTAs but of course I don't get that...

I love him in tux! He is a saint, and thank God he hasnt been excommunicated...um...YET! LOL!

Well, Empire On-line got it right! I'm gonna wake the fam with all my hysterics at the computer! Thanks for pointing this one out Krix! It a real gem!

Saint Keanu huh? I saw the show and the camera kept going back to him sitting in the audience. Well, actually, a lot of him and Richard Gere mostly (sitting separately of course). He looked like he was enjoying himself but a little uncomfortable presenting. He actually seemed like he was out of breath and went straight into the nominations with no inane small talk. He presented to Imelda Staunton and looked geniunely excited for her win. If I'm correct, he worked with her in Much Ado About Nothing.

HE IS A SAINT!!
so i'm also not alone with that little bit of awareness...!

Nice picture, krix! I saw the Baftas, but didn't see them cutting to him in the audience...guess I'll have to watch again...and again...

he has cured my lameass more than a few times.....and I love that some of the pics on the red carpet show him w/o his bowtie yet, last minute put the damn thing one kinda guy and wanda looking into the eyes causes instant loss of ever wanting to do anything else....at least that is my feeling, oh man

omg!
well... hemakes me want to eat chocolate...
the glue of love!

Holy Mole! He looks good in that tux!

I was watching da BAFTAS cos thier was nowt else on - quite unaware "our boy" was there, however shortly into the proceedings, omg waita minute did I just see? Yeah! Lots of different cutaways kept catching Ke unawares, so obviously I kept watching. He looked just perfect, hubby was sat tutting everytime I bolted upright to take in every micro second of Ke !!!

How giddy did I get when the fab Stephen Fry started to introduce the one and only, I was clapping and hubby was rolling his eyes. Oh shut up! We hardly ever get Keanu on British telly in real time anyway... Guys it made my weekend, nay week at least!!

And bonus, he even popped into my dreams to give me a huge bear hug that night too!

Saw it really, really late this weekend and I was half-asleep...

Got to see Cate Blanchett (I love her!!!) present, and some other people...and then...

That dissolved my sleepy haze. He of the carefully crafted bed-head.

*nodding* He was looking sharp. Yep.

Where else can one watch the BAFTAS and then a Coupling marathon?

If he's a saint then I'm going to hell TWICE for the things I've been thinking. I'm pretty sure you're not supposed to do those things to saints.

Posted by: vika on February 14, 2005 11:58 AM
What's on your mind?.....
(new here? please read this before commenting)
Remember, this is a fan site.
Keanu Reeves is in no way connnected to this website.
Please do not make a comment thinking he will read it.
Comments are for discussion with other fans.
Thank you.