at last, a place for keanu pilgrims to leave their panties 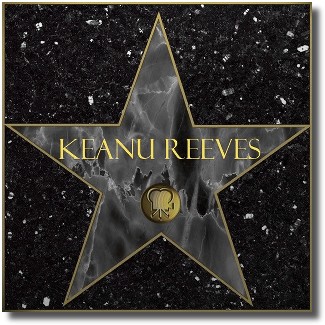 According to the Hollywood Chamber of Commerce website, Keanu is scheduled to get a star on the famous Walk-of-Fame this Monday, January 31st at 11:30 am.

The location of the star will be at 6801 Hollywood Blvd, in front of the Kodak Theater.

I so wish I could take Monday off!

I wish I could be there, it's about time they did something like this for him.

hope, they have some copies prepared to replace because this one will be erased in a kick. i wanna be there. (in front line!*grin*)

hee! I knew you'd do something beautiful with this! I'm glad it's in front of the Kodak Theatre.

Thanks for the nice visual krix!!

Where do I mail my fav pair of silk and lace panties???
This star is so much better than the RL one, krix!

Sorry, I haven't been getting much sleep lately. My 2-yo nephew's in the hospital with pneumonia.

I knew it when Regis told me so weeks ago. Regis doesn't lie. HA!

About time for this star doncha think? I can speculate that he is not one to push for such things but I think he'll get a little private kick out of it none the less. I hope there is some press.

Oh hurray! Nettie will be going on Monday so we'll get the info. This is a nice stop for her tour.

Seeing that I'm here, I might as well go over and have a look.

It's about bloody time.

How does getting a star work?? What's the process?

Aparently, you have to be nomiated and the folks that nominate you have to cought up about $15,000 [helps with the upkeep of the star].

We were planning on nominating Keanu about 5 years ago, but we didn't have that kind of money.

Finally! I am SOOOOOOOOOOO happy for Keanu! I'm up here in Canada so I can't make the event in person but I will look for a story on ET or something like that.

I bet it will be on ET on Monday - set your VCR's everyone! Wow - in front of the Kodak Theater - that means everyone will be walking on him (so to speak) on Oscar night!

It's about time!! Congratulations Keanu!

Now I know where I'll be the next time I'm on Hollywood Blvd!

Sigh but that might take a while to happen... lol

Eeee! *has a Keanu attack*

I'm going to move there to that star. I will now live on the star!

Oh, I hope no one really leaves panties on that star. That would be nasty. I may have to stand guard on weekends.

But, hey, on the bright side, any of us who ever want to meet up in Hollywood now have a place to meet! "Meet me at ... the star!! At seven o'clock! Wear a long, black coat! And sunglasses!"

For the Ultimate Star Keanu Reeves!!

Can't wait to see his ultimate smile when he is there...smile baby smile, you deserve it all!!

@tabitha. hope your nephew´s going to be well soon again! all my best wishes to him raining like millions of stars into his little body to recover!

...and the other star thing:) would love to be there of course, and preferably on his ;) arm...smile...
does anyone know how he feels about this star affair by the way???
lots of love

@smit too: and you forgot : a scruffy sexy beard ;)

Gawd, I need to look for the best panty to leave on that star. Erm, is red too tacky? ;)

I don't think red is too tacky, but crotchless might be.

i'm very very happy for him!

Well, it's about time! Well-deserved. I was just walking down Canada's Walk of Fame yesterday on my way to Chapters. There are still plenty of open spots...maybe this year for Keanu? Better yet, how about Keanu AND Kiefer? Best of both worlds right?

OMGGGG!! I know its abt TIME! is anyone here going? I want to go sooo bad if there are ppl who want to meet up PLEAAAASEEEE let me know! I am from Puerto Rico and this my be the only time I ever get to see Keanu... *sigh* lol

ok that sounded desperate but I guess thats cause I am... and forgot not to put my name at the end of the message LOL sorry

Great design Krix.
Lord knows how long I'll leave my hands in those manly hand prints once it's out there.....

Oh no don't tell me there'll be handprints?!

Total elation! I am so glad finally Keanu got this much deserved recognition.

krix, I love the graphis.

I think the handprints are something different--Graumann's Chinese Theater.

Although certainly you will be able to touch the terazzo he touched...! squeee!

krix I SO wish you could be there...is jozjozjoz going?

I'll have to watch them present it to him on TV, but I'll be makin' a pilgrimage for sure ;-)

hey anyone here going that wants to get together? :)

That is awesome! He totally deserves one!

i'm going....but rushrushin...so probably no time although iwill try ot get to computer while there...))

UGH well I just got back and I couldnt make it DARN train left like a min before I could get off the bus GOD I dont know why but Im not as depressed as I thought I would be if that happened... maybe there's still something better for me... HMM... LOL

well to all you guys going have fun and good luck with everything OH YEAH and bring LOTS of piccies! ;)


Posted by: keanu_charlize on January 31, 2005 10:28 AM
What's on your mind?.....
(new here? please read this before commenting)
Remember, this is a fan site.
Keanu Reeves is in no way connnected to this website.
Please do not make a comment thinking he will read it.
Comments are for discussion with other fans.
Thank you.