Thanks AGAIN to Ale for this Austin Chronicle article on A Scanner Darkly... 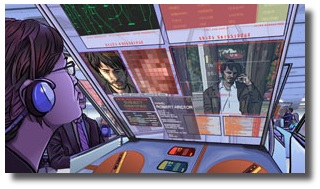 Dream Job
Inside the production of Richard Linklater's 'A Scanner Darkly'

Richard Linklater's Detour FilmProduction is a hive of activity these days, its warren-like rooms buzzing with dozens of local and far-flung animators, some 35 in all, working in teams and hunched over Wacom tablets connected to Power Mac G5 towers and oversized cinema display monitors. The sight of all this computing power alone is staggering, but the real short, sharp shock comes when you get a look at what the Detour and Flat Black Films conscriptees are working on: It's Linklater's faithful adaptation of Philip K. Dick's novel A Scanner Darkly, which is being brought to full paranoid life via Bob Sabiston's gloriously surreal software abilities, which, as in the team's previous Waking Life, utilizes hi-def filmmaking overlayed with a rich, rotoscope-inspired animation. Thirty-plus animators, and, here's the catch, so pay attention: They need more.

This time out, however, Linklater is eschewing the dreamy, existentialist look of that previous film in favor of a more realistic approach; at this early stage, A Scanner Darkly looks for all the world like the world's most breathtaking animé, drenched in a sort of hyperrealistic, painterly scheme that rests atop the talents of some of the world's finest actors.

"Waking Life was real loose," explains Flat Black animator Mike Layne. "We had each person watch what Rick had done, and then whichever scene seemed to be a match for their animation abilities they could take a stab at.

"With A Scanner Darkly, we're trying to be much more cohesive, because we've got A-list actors and those guys need to be recognizable. If you've got somebody like Robert Downey Jr., who is made of elastic – there is nothing on him that is stationary at any time – capturing all of his expressions and doing justice to someone that great an actor is a real challenge. It's interesting to see him in particular, because you never really notice how much goes into acting until you see a guy who is going into the scene that way and you see every little nuance that goes into each little piece of his performance. It's incredibly complex and detailed, and we've really got to capture that in the animation."

The storyline, according to Sabiston, is "about a house full of roommates who are all basically drug addicts, one of whom happens to be an undercover cop assigned to surveil his fellow roommates and discover where the chain of drugs is coming from."

This being a Philip K. Dick adaptation, things are a bit more complicated than that, and Keanu Reeves' Arctor character – the cop – suffers a schizophrenic mental break that causes him to begin "narcing on himself," essentially. Read the book, see the movie, but don't plan on playing the board game anytime soon. On the plus side, your dream job has just been announced:

"We're trying to have this movie have more of a unified look than Waking Life," Sabiston says. "It's more of a finely detailed comic book with fine lines and real accuracy, a very polished look. And people who have experience drawing really detailed, accurate portraits of people are who we're looking for." – Marc Savlov

Be sure to click on the article link for contact info for anyone in the Austin area that is interested in applying for the animation team as well as more stills from the production, including the first looks at the rest of the cast.

I entertained aspirations of becoming a cartoon animator. I bought some paper, pencils, and a book called "Teach Yourself Animation." I taught myself to draw pictures like Chuck Jones and Friz Freleng. But my hopes were eventually dashed to the ground when I learned that the only way I could have a career as an "animator" was to relocate to California. LOL! I was crushed!

...we see here it is mostly done by computer now. Maybe there is still hope for my "dream job" ;-)

Posted by: wanda on January 25, 2005 09:22 AM
What's on your mind?.....
(new here? please read this before commenting)
Remember, this is a fan site.
Keanu Reeves is in no way connnected to this website.
Please do not make a comment thinking he will read it.
Comments are for discussion with other fans.
Thank you.