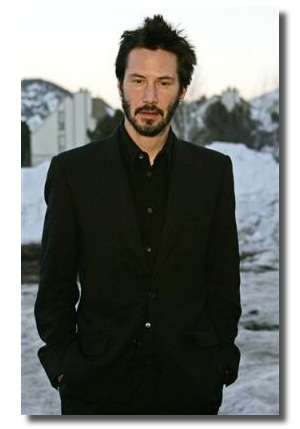 Keanuette's there as well (as are Wanda and Tess), and she was lucky enough to attend last night's Thumbsucker premiere showing. Read her report here. She has some good things to say about the film without giving too much away. Oh yes. Two Words. Bicycle Shorts.

Club Keanu has photos of him out and about in Park City as well. Have I mentioned YUMMY?

Not as cute as Reeves of course, who apparently still forgets to pack a comb. 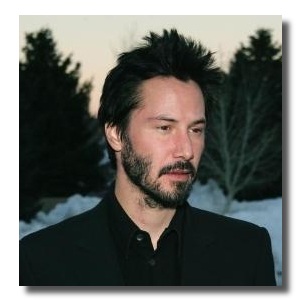 Man, I so wish I would have gone. I have the perfect boots to match his scruff.

I'm looking forward to more reports from the field and hopefully some reviews of the film, which seems to be a pretty popular draw at the festival, which is good news.

Yeah, I was thinking the same thing about Defamer. I kept expecting *something* about the K-man.

have to put it short; out of lack of time:
this is my favourite look of you sweets!

Looking at him, I guess he didn't pack anything at all,
not even one of his scarves ;-) that I love seeing on him!

There is that yummy man doing what he does best...makin' pictures ;-)

yummyman=right
sundance=watch snow melting as keanu walks by!
yes yes yes ... i've been a little fly o the wall...erum.... on the bus/trams.... and peoples casual conversations are all mentions of hwo much they like thumbsucker(im pullin for distribution in the next few days...)and how great all the performances are...

Erm, is anyone else having trouble getting into the Club Keanu site ? I haven't been able to access it since Thursday - sister site Keanufan is the same. Just wondered if the problem is with my computer rather than the site !

like1) )))) something weird like technonlogy...
am i the only one who, still, has major upload problems with picture phones...i'm sure the sattelites have been overloaded and upload times doubled... (sometimes it will make me retry of not 1 not 2 not 3 but 10 or 11 or 12 times... pout!)
2) am i the only one who can actuallu messydressy up the clicking on browserwindow... sheesh...
or...
3) hey how come i dropped my cell phophone and ranover it... oops! that means no pics till i get a new phone... oops! i'm in a place where i can't get thast this minute....double oops! sounds like a new
4) or realizations like wow! i better get my beauty sleep for my dream job...
4) when away from main computer updates can take longer because of limited computer access like:
public computers have things lke uh.. the public
and they want to use the computer! so ya gotta to make allowances for work in the field!

i'm sure i'll think o fsome more..
note to self... get whiskeyandcombs!

Posted by: Tabitha on January 25, 2005 05:48 AM
What's on your mind?.....
(new here? please read this before commenting)
Remember, this is a fan site.
Keanu Reeves is in no way connnected to this website.
Please do not make a comment thinking he will read it.
Comments are for discussion with other fans.
Thank you.