Reeves and Bullock, together again 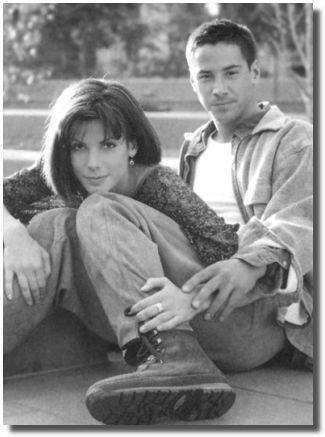 Bullock back with Reeves for 'Il Mare'

By Liza Foreman for The Hollywood Reporter

Sandra Bullock and Keanu Reeves have signed on to star in "Il Mare" for Warner Bros. Pictures. The project will mark the first reteaming of the actors since their 1994 action thriller "Speed." A remake of the Korean feature "Siworae," which also has been known by the title "Il Mare," the romantic drama follows a lonely doctor (Bullock) who begins exchanging love letters with a frustrated architect (Reeves), but they then discover they are separated in time by two years. Based on a screenplay by David Auburn ("Proof"), "Il Mare" will be directed by Argentinean helmer Alejandro Agresti ("Valentin") and produced by Roy Lee and Doug Davison of Vertigo Entertainment. Erwin Stoff also will receive a production credit. The executive producer is Mary McLaglen. "Il Mare" is set to begin production in March in Chicago and will be released worldwide by Warner Bros. Pictures. Reeves has appeared in Warners' "The Matrix" trilogy and will be seen in the upcoming Warners release "Constantine." Bullock, another Warners mainstay, stars in the upcoming "Miss Congeniality 2: Armed and Fabulous." Both actors are repped by CAA.

Read more articles on this via Google News >>

I love the idea of him working with Sandy B. again, I adore her.

I think she's great, and they're great togethert too.. they both should get "together"

What happened to the Night Watchman? I AM thrilled about another romance for the 2 of them whatever happens.

I'm very excited about this and what I've read of the Korean original sounds wonderful too. Romantic and melancholy and great!

Heee! This is so exciting. I love Sandy.

Falling in love via letters is supremely romantic, so I've heard.
;)

I am looking forward to this one. They have both gone through alot of changes since Speed, it will be interesting to see on their on screen dynamic again.

Sandra has a production company. Wonder if she is producing this for WB?

Tyler it sounds like "Vertigo Entertainment" is producing. Whoever that is.

Will I watch? I don't know.

While I'm thrilled to learn that S&K are planning to make another movie together,
I hope the Night Watchman is still being developed.
Having a script written by James Ellroy is not only a big honor but also a great challenge!

I thought SB & KR had great chemistry in Speed!! I'm so glad that they will be on the big screen together again. Bravo, to whomever is responsible for this casting!!

I've got the original Il Mare coming from Netflix this week. According to the above linked DVD review, the subtitles leave a lot to be desired, but I'm hoping to get the feel for it anyway.

I´m little be afraid about romantic drama with Mr. Reeves but ... never say never. Once it must succeed!*cross fingers*

Interesting story. Looks like a Back to the Future, time-space paradoxical kind of thing....second chance story with a happy ending/beginning, depending how you look at it. Neat! I too hope The Night Watchman isn't delayed, though...I have high hopes for it.

um canitry a love letter!
(i get these creative art whims!
le'ts see.. she also heals with kitchen arts andhe majored in archetichtre and minored in poetry... great buildings are like a work of archetctural poetic art... http://www.summum.us/philosophy/phi.shtml
http://www.guardian.co.uk/online/science/story/0,12450,875198,00.html)
very inspirational....(as are all reeves movies!)(!)
my dear mr. the one,
have i told you lately that you are the one! and the 1. as i type this now i see your georgous smile and your soulful eyes, now i know why i'm so in love, you gave that sparkle to me... you sent it from heaven abovve...and the twinkle that says tell me something good...its you, of course (the something good;) )

have i told you lately how amazing you are...
the smile is on my face and i know you're there in coordinated time and space...

i've been wondering abou the kind of love i have and as i stand in front of you, if it's enough for you......as my main inspiration ultimately you make it possible... and i only want to do what is right... my prime directive says never impose never manipulate never overexpose
work to keep the mystery the honeyopothy aand homeoapthy
YOU have such a wonderful effect on me...
(some nice frineds too!)
have i told you lately that for me the sun rises and sets in your eyes.....
i don't know how else to say it!
you have everything and yet we all need a new shirt now and then...
have i told you lately that you not only look really good in those suits, jeans...etc.... but that you are so intelligentandexperienced, kindandyetfirm, knowthebottomlineandthetopofthesky...
(andyetstillwillingtolearn...)
that's where i sent my message of love and to you it came...i hope from above...

have i told you lately how much i want to give back and how little i seem to have... but i'll always give you my 2cents wworth... if you would like to have that...
have i told you lately that life is making sense in strangeandweird ways and more strange and weird ways...i see the people around me all happy in their daily kvetching...lif'e s not perfect but we can try...and make it vital

have i asked you lately... what do you like to cook at home...

have i complimented you lately on you ability to focus... and the joy and pleasure your archangelitecture brings to the lives of others...

Krix, please, tell us how it's the original movie when you whatch it, OK? Curiousity can kill, you know...;P
Anyway, I read a corean DVD review that tells a lot about the story and the characters, but does not have heavy Spoilers,(to the ones who does not want to know too much). I have to say that I'm already in love with the male character, I just imagine how Keanu will play him. I'm here just imagining him, in that house, the sea, with a longish hair and a scarf! (don't know why, but I'm seeing him that way!). :) The link for the review is here, it's pretty good, and does not reveal too much.
http://www.opuszine.com/movies/review.html?reviewID=186#top

I like his choice on this one. I think its a beautiful story, and I havent even seen the movie yet. Keanu and Sandy have been cast perfectly in this one.

...I had the same thought Krix, supremely romantic *sigh*

It will be great seeing the two together. I always wished they would have hooked up as a couple. (Sandy would be good for Keanu). I also agree w/other posts that a romantic role is questionable and that The Night Watchman will be a better artistic challenge for Keanu. I hope it's still in the works. Keanu needs to start working w/some new female actors. He's getting to comfortable working w/those he's worked w/in the past and there's a lot a new exciting ones on the scene.

Posted by: kay on January 20, 2005 10:10 PM
What's on your mind?.....
(new here? please read this before commenting)
Remember, this is a fan site.
Keanu Reeves is in no way connnected to this website.
Please do not make a comment thinking he will read it.
Comments are for discussion with other fans.
Thank you.