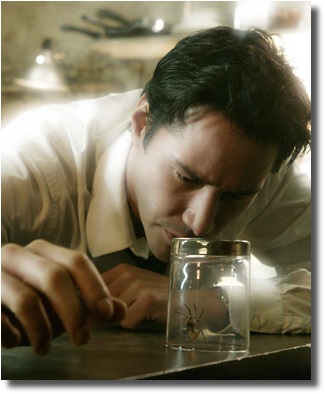 The Constantine official site has been updated with some stills from the film in the 'photos' section.

The lovely German site has a new trailer up.

A link to a Korean site with nine clips can be found here, it won't work on my machine here at the office so I'm not sure if they are the same nine from the German site or not.

I don't have much interest in the upcoming video game but if you do, you can always check the STHellforum thread about it for updates.

Speaking of our favorite comic fans....

Some of them have way too much time on their hands...

Heh, at least they admit they'll still be seeing the film at least once.

I love the piss take, but don't burn my baby...

...still don't get it why our site is the one ahead of all others in development.
Maybe because we're the biggest foreign market?

i'm still in la but and i actually saw athe billboard over sunset by tower, i think it was...
i must wati a bit to get on the freeway...
keanu=mrdreamcometru...
what a #$%#$% BABE!

all my fuses are being repaired ....
becky was sooo cute to meet!
coulden't get to computer till now so brief review...
(soirry iuf i mkae typios again... i'm going fast because i want to gbet on the road so i can get hom e to make more happimnesss !)
IF reeves was there, i missed him...(i was a bit late) there were cute dancers up at the front of the stage and a few friendly faces...and i got my errie constantlysnnnion sense hat there were some other important people just kinda standing around... i just kpet lookin around me...
beckymusic was as usual awesome.... i now try totake all my fashion styling tips frim rebecca... etherial, gritty...like a vanillabeanlemonaid with smooth tequila in it!
she this time in a gaawwwwwgous ensam of simple basic black and green/blue tartan
paulie=activeandtalented
rebecca=vocalqueenandbarbiedream
rob=keepinthecoolandperfectbeat
chrisanderic=attitudeandfun
keeanu=alwaysthereandalwayscares

And slightly disturbed by their lack of life.

And that's a waste of a good picture... there are starving fangirls in the East coast ya know lol

those photos are a good bait! *drool*
hi, wanda! i was on different concert - mozart and beethoven - but (may be it´s hard to realize) in my mind a spent the most of time with "mrdreamcometru" ... (hm, when i don´t?)

LOL@ Meaner and Claire! It's all in good humor...and too funny! "SMOKE THIS!"...that's my favorite.

As for the Becky gig, I heard that "mrdreamcometru" was not in the audience.

*whispers* I'm terrified of spiders! Please, somebody let it outside!

And yes--I read and saw Charlotte's Web as a kid. No, it did nothing for my arachnophobia.

well... i fess up that i have actually 5 original constantine comic books... although i don't think they are of the stories being worked with here...

it's all scary to me!

oh... yes lizzie!
i see... sorry about the confusion again!
when i wrote that note about mrdreamcometru i was rushing because i was trying to drive out of LA on a Friday and it was already around 4 o clock.... believeit or not, i was actually considering still gettin on the road but reconsidered due to the traffic...

all the excite4mnet is exciting!
just have to get my beauty sleep!

yummmmm, every different trailer just makes me drool a bit more, I think this one is gonna rock!
and speaking of rocking, how did it go last nite?
glad you made the show wanda!!!

Posted by: :: jozjozjoz :: on January 16, 2005 02:39 PM
What's on your mind?.....
(new here? please read this before commenting)
Remember, this is a fan site.
Keanu Reeves is in no way connnected to this website.
Please do not make a comment thinking he will read it.
Comments are for discussion with other fans.
Thank you.