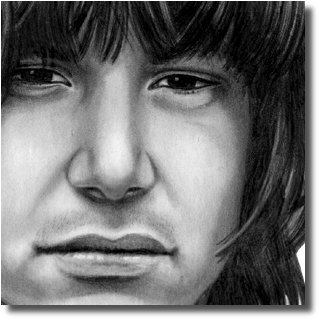 Found via Catz, this gorgeous portrait of Keanu is by Pat McMichael and can been seen in its full glory at deviantart.com.

And now, here's Brezsny with a little literature with your fine art...


VIRGO (Aug. 23-Sept. 22): Marilynne Robinson published her first novel, Housekeeping, in 1982. It was nominated for a Pulitzer Prize, and an influential critic called it one of the ten best novels of the twentieth century. This November, 22 years later, Robinson came out with her second work of fiction, Gilead. "Writing is like praying," she told Carin Besser in The New Yorker Online. "In both, if they are to be authentic, grace and truth must discipline thought." I nominate Robinson to be your patron saint in 2005, Virgo. May she inspire you to produce another gem like the one you did some years ago. May her example give you the faith to work as slowly as you need to in order to remain impeccable, allowing grace and truth to discipline your thought.

I don't think he's in danger of letting himself be corrupted -
but anyway, I'll gladly take any gem he comes up with!
Constantine? A Scanner Darkly?? Who knows!

Ms. Robinson, I believe you’ve come to realize the amazing power of grace and truth.

that is one incredibly gorgous drawing.....wow and for his wife, hee hee, who loves this punk LOL LOL LOL

Yeah, I was wondering if his wife posts anywhere..although I would have thought *she* might have shared the joy with us back in September if so.. *wink*

Posted by: nudel on December 24, 2004 06:52 AM
What's on your mind?.....
(new here? please read this before commenting)
Remember, this is a fan site.
Keanu Reeves is in no way connnected to this website.
Please do not make a comment thinking he will read it.
Comments are for discussion with other fans.
Thank you.