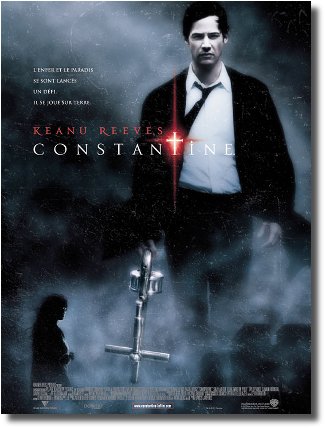 Thanks to Ocean over at the HellForums for this first look at the international Constantine poster from French film site allocine.fr.

Silly sanctified weaponry or not, I like the look of it in general, I prefer the logo over the US version and I love his look on it. I think it conveys the feel of the character well. He looks all ready to kick some demonic ass and that = sexy.

hmmm... agreed, I like the overall look better, especially HIS look! And love they dropped the Matrixy green tone the US one has. Like the typography better on this title, but as I said, not sure the "cross" T would work over here.

uh, basically I agree with krix. *wink* who wouldn't?

Totally agree. I much prefer this logo over the other. I'd love to see it paired with the old artwork in silhouette. Can't wait for this to hit the theatres.

Like this a lot better but could have done without mini-Rachel and the Holy Shotgun...

Love it, except for the gun. And I'm really digging the tag line:
"Heaven and Hell challenge each other. The battle plays out on earth."
I know. But trust me, it sounds really cool in French. ;)

personally i think this posterreally brings into focuskeanu as the main thing... when i went to see a movie yesterday i didn't see the constantine trailer... but was very interesting to see the the silhouetteed image poster on the wall...
very very exciting...

personally i think this posterreally brings into focuskeanu as the main thing... when i went to see a movie yesterday i didn't see the constantine trailer... but was very interesting to see the the silhouetteed image poster on the wall...
very very exciting...

I must say, I like the whole new look it's been given here. The logo is cool, and the colors are much more clean and crisp in this one, compared to the green. I love reading the tag line in French...can't wait to see it!

I prefer the US poster. I don't really know why but this poster reminds me of the Man on Fire poster except it's grey and little Rachel (instead of Dakota) somehow ended up on the bottom left hand corner. Yah whatever... but I like the red T in the logo and the tagline sounds good. :D

I don't like the poster (except the logo). The complete poster looks faked. His hair is wrong - it is impossible to comb it this way, it's too short. And remember Keanu is left-handed. He holds the gun in his right hand here.

Although I do see similarities with Man on Fire, I also do really really gid this poster. Remember, poster design follows trends and cycles jsut like everything else. Also, Keanu is left handed but he has played right-handed before, hasn't he? Maybe I'm making that up.

He looks great - really great - and it is a new kind of look for him. I love how they've taken a chance on his bone structure and general strikingness and allowed his eyes to be hooded and guarded. Speaking relatively within the industry, Reeves has such an individual, trademark look. His face is like no one else's and I think it's interesting that they've chosen almost to disguise him. Dare I say, much more so than on the US posters.

Thanks for sharing it, krix.

Re Guest:
Bea is correct, the right hand is his 'gun hand',
as can be seen in Point Break, Speed, The Gift, all Matrices,
and in several Constantine trailers...

He also played right handed in Dracula. Harker writes in his diary with his right hand when he's on the train.

A man in a suit, carrying a holy shotgun in his right hand. I don't like the gun either, but it looks right to me...it looks...

i hear ya!
all his posters/movies are rightous to me!

but u guys are tres observant!
merci merci

i must see that one again zen...

i saw the hair thing, and i like it i think it really adds to the character he is portraying...
i mean the constantinian (has a constable sound to it... consonant, constant...
i digress momentarily for this link
http://images.google.com/images?q=constantine&hl=en&btnG=Google+Search

His hair does looks daft tho

The hair didn't particularly strike me as daft, virgo, but i do see what you're saying. :)

Hopefully when we see it full-size it'll be more obviously wind-swept (like his neck-tie) as opposed to "bad hair day".

Seeing that poster again just reminded me - I watched Matrix Reloaded at the weekend... and the fella has gorgeous hands. Big and strong and expressive and just. gorgeous.

I know what you mean, bea. I love his mits. They look like they would be very comforting.

That's it--I'm going to eat the chicken noodle soup that's been staring me in the face since 3.

I love the way he is expressive with his hands.

I think I'm going to have to watch this in French too ;-)

Posted by: lizzie on December 22, 2004 07:39 AM
What's on your mind?.....
(new here? please read this before commenting)
Remember, this is a fan site.
Keanu Reeves is in no way connnected to this website.
Please do not make a comment thinking he will read it.
Comments are for discussion with other fans.
Thank you.