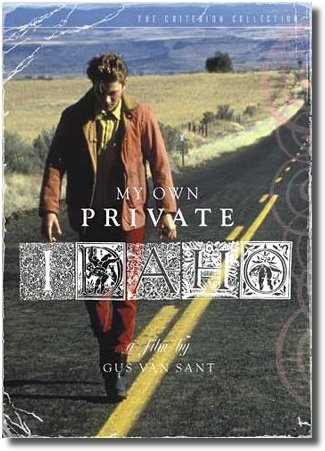 River Phoenix and Keanu Reeves star in director Gus Van Sant's haunting tale of two young street hustlers: Mike Waters, a sensitive narcoleptic who dreams of the mother who abandoned him, and Scott Favor, wayward son of the mayor of Portland and the object of Mike's desire. Navigating a volatile world of junkies, thieves, and johns, Mike takes Scott on a quest from the grungy streets to the open highways of the Pacific Northwest, in search of an elusive place called "home."Groundbreaking and visually dazzling, My Own Private Idaho is a stirring look at unrequited love and life at society's margins.

Criteron Collection DVDs are the top of the line and it's about time that this great film gets their attention. Set for release this February (an available for pre-oder now at the Criterion site), the 2 disc set will include features like an "exclusive new audio conversation between Van Sant and filmmaker Todd Haynes" (does this mean commentary track? I'm not sure), documentary footage featuring interviews with key crew members, outtakes (eee!), high quality audio and video enhanced for widescreen televisions and approved by director Gus Van Sant and a booklet featuring a new essay by film critic Amy Taubin and reprinted interviews with Van Sant, River Phoenix, and Keanu Reeves. Plus more...

OMG I CAN'T WAIT FOR THIS BABY!! THANKS KRIX!!

extreme coolness ! thanks for the headsup ; )

I knew that as soon as I bought the VHS this would happen...*sigh*

it is teh coolness, though!

while i do love this movie, i don't love the part where the old man makes him dress in that little outfit and scrub the floor. creepies...

i pre-ordered mine last week! i can't wait. i love this movie and i love keanu and river together.

I really love Scotty Favor. If I HAD to make a list he would be #1 for me. Then Jjaks then Neo...... but I wont bore you all with my list. LOL

River got the Independant Spirit award for male lead in MOPI.

this reminds me that osmetimes there are circumstances difficult to explain...

keanu is a tthe top of the list cause, i'm not an actress, but i think that he made all his characters come alive with artistry and talent...

I have it on VHS too. DVD would be nice especially if there are extras. :)

It says outtakes are going to be on it! Yay! I hope there is one of Udo's weirdass performance piece he does for Keanu and River! That was hilarious!

I can't believe it. And I didn't even have to break down and buy the VHS for it to happen.
Sorry nudel. ;)

Posted by: Zen on December 19, 2004 04:04 AM
What's on your mind?.....
(new here? please read this before commenting)
Remember, this is a fan site.
Keanu Reeves is in no way connnected to this website.
Please do not make a comment thinking he will read it.
Comments are for discussion with other fans.
Thank you.