Constantine around the world 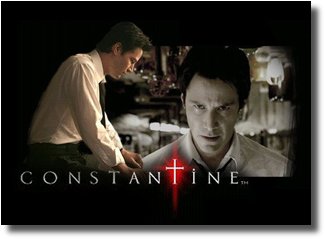 With just around two months until the release, the WB Constantine machine is throttling up to full power. Not a whole lot going on at the US movie site yet, but there are several trailers to be seen, including a high-res version of the second one at WB.com. There's a good discussion at the hellforum comparing the international and american versions.

There are also official sites in German, French and Latin-American (mostly in Flash and may contain some spoilery stuff, so take note).

Worldwide release dates are (tentatively - as listed on IMDB) as follows:

Lastly, HBO will be having a "Constantine: First Look" program that airs Tuesday, Feb. 1 at 10:45 p.m. with repeats all that month. I'm guessing that it may include a lot of the material from the preview DVD, which thanks to Chicks, I am now in possesion of and will be watching and riffing on later this week.

If that's still not enough Constantine for you, you can buy the book.

*thud* look at czech republic! two moth later and that definitely means that in slovakia it will be later (much more, grrrr!). where is world wide release date of M2 and M3?
* a lot of patience is needed ...*

Hey krix glad you got it and hope it works for you, enjoy it!!
Oh and where did you hear about the LA premiere on the 11th? (hopefully not that same site that was posted at my board which isn't right) I ask because since we're going another_angel has a WB contact and talked to her Monday and she said LA but at this time no date for sure, however probably the 8th. (something about never on a weekend I think) So we still don't know for sure! Would be nice to know soon to make travel plans.
Thanks!

Ah, you know what? That is the NY premiere as listed on Keanu A-Z. I'm not sure about the LA date. I'll correct the entry. My bad.

You must be so excited!

krix I didn't know it's up at A-Z but when it was posted at my board angel and I checked out the site carefully, just some "friends" network and some guy named "Joey" posted about a premiere in NY. Upon further reading, the "NY" was where the poster is from and the premiere is at 12 AM! The time it premieres in Spain

Yeah, I was going by the tribe.net info. Anyway, I changed the entry to be wonderfully vague (since no one took me up on my offers of sexual favors* to go anyway, the actual date doesn't matter a whole lot to me, hah!). I wouldn't be surprised if there was an NY premiere on that date (the 12.am time listed could just be where the poster left the default time since he wasn't sure of the exact time), but I'm sure the "World Premiere" will actually be in LA. Those of you who are lucky enough to go will surely be getting details at some point.

Still don't know where that Feb. 24 for Germany came from
but WB says Feb. 17 on their site...

Not at all. I want things to be accurate. I kind of rushed to get all the Con-info up since I'm so behind so I didn't do a lot of deep checking.

I watched the trailer in German and
OMG why would anyone want voice overs for Keanu! His voice makes every one of his movies fabulous! I would much rather read the subtitles and listen to that "velvet wrecking ball that is his voice".
I just viewed "Maria Full of Grace" and I don't think the subtitles took away much from the movie.

I watched the trailer in German and
OMG why would anyone want voice overs for Keanu! His voice makes every one of his movies fabulous! I would much rather read the subtitles and listen to that "velvet wrecking ball that is his voice".
I just viewed "Maria Full of Grace" and I don't think the subtitles took away much from the movie.

a lot of info!

of course what i mean to say is the amount of work and dedication behind this makes one take pause to consider adn love the whole picture at least in an effort to be worthy of such fine enterprise
as we are fortunate enough to be aware of in this time and place...)))

Thanks a million, krix, for the trailers link. At the risk of being totally unoriginal and stating the obvious - it looks very good. But like g-o-o-d kind of good. I'm excited.

I don't know. I say the title of this entry, and all I could think was Pigs in Space.

Is it just me?

Posted by: Tabitha on December 17, 2004 06:04 AM
What's on your mind?.....
(new here? please read this before commenting)
Remember, this is a fan site.
Keanu Reeves is in no way connnected to this website.
Please do not make a comment thinking he will read it.
Comments are for discussion with other fans.
Thank you.