Along with a short video clip, MTV.com this interview with Keanu on the Set of Constantine.... 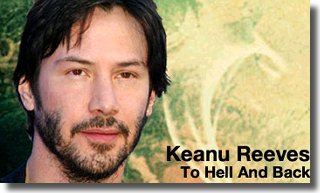 He's traveled through time for school projects, seen life without the illusion of the Matrix and saved entire busloads of people from a madman. For his next challenge, Keanu Reeves will play a supernatural detective who's actually been to hell and back. In "Constantine," based on the comic book "Hellblazer," Reeves' titular character teams up with a police officer to investigate her sister's suicide. Along the way, she gets to see the world of angels and demons that normally only Constantine is privy to. "TRL" co-host Damien caught up with Keanu on the set in Los Angeles.


Damien: What's the movie like? What's the plot of "Constantine"? It's based on a comic book, right?

Keanu Reeves: Yeah, it's inspired by "Hellblazer," and let's see ... I play a character named John Constantine, a man — an exorcist — condemned to hell for the life he took.

Keanu: Yeah. His own life, by the way. Condemned to hell for that, and he's trying to find a way to get back into heaven, so he's doing that by kind of casting out demons and trying to find a kind of redemption. On his way with doing that he uncovers a plot for certain forces that are trying to make a hell on earth, and there's only one man who stands in its way.

Damien: Who is that man?

Read the rest at MTV.com...

Also, Club-Keanu has captures and the TRL clip in case you missed it.

Wait. Why didn't anyone tell me that Constantine killed himself and now walks the earth trying to get out of hell? That's neat.

I suppose I'd know if I could read the comics, but for reasons of Warren Ellis I cannot.

But if my I can be guaranteed that none of my admission price goes to Mr. Ellis, I think I'd enjoy this movie.

I'm glad to see he's out and about doing a new interview...the older one is...well...getting old.

Posted by: lizzie on December 3, 2004 02:16 PM
What's on your mind?.....
(new here? please read this before commenting)
Remember, this is a fan site.
Keanu Reeves is in no way connnected to this website.
Please do not make a comment thinking he will read it.
Comments are for discussion with other fans.
Thank you.