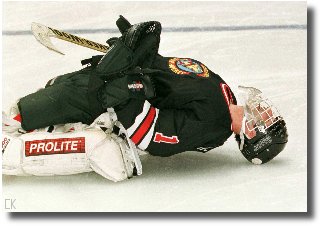 Keanu's been known to bend over backwards for charity before. Since his bass dance card is no longer full, here's hoping he'll make some Chicago area ARIZONA fans happy and take part in this hockey event.

From the Chicago Tribune:

You won't be able to watch the NHL All-Star Game because it has been cancelled during this locked-out season. But you can play in an All-Star Game of sorts in December.

Former Blackhawks star Jeremy Roenick is staging "J.R.'s Wicked Weekend," a charity event for the Kita Children's Foundation over Dec. 10-12 in Arizona that includes a round of golf and participation in a fantasy camp-like hockey game.

Your golfing foursome could include the likes of Tony Amonte, Steve Yzerman or Doug Weight, while your linemate in the hockey game might be Mario Lemieux or Mike Modano.

Note that it only says he's invited, not confirmed so don't go booking a flight just yet.

***Thanks to Carrie for pointing out that this event will take place in ARIZONA, which is like, right next door to Nevada.

However, I have serious, would-not-change-for-anything-not-even-the-chance-to-body-check-Reeves plans that weekend.

I'm really stupid....lol...but where will this game be taking place in Chicago?

Sorry, I don't have any more info, there's a phone number in the article though.

he IS invited!
i love that streak of charity in him...

Thanks Krix. I'll get my friend to check it out. :)

Doesn't the article say it is in Arizona on Dec 10-12, not Chicago?

Doesn't the article say it is in Arizona on Dec 10-12, not Chicago?

It sure does. I'm a doofus.

Sorry for the double post! I live in Chicago and it is a little too cold to play a round of golf in Dec! ;)

No problem, thanks for pointing it out.

Taking place in Arizona WITHOUT fans from Chicago? *shock and surprise*

I doubt many Chicagoland fans will fly in for it, but I'm sure they support it. It's for a good cause(charity).

What's up with the Chicago number?

Because the organizer is a former (Chicago) Blackhawks player?

Chicago, Arizona, Whatever. I want to know what krix' plans for the weekend are.
I mean,
"would-not-change-for-anything-not-even-the-chance-to-body-check-Reeves" kind of plans?
That's gotta be serious. A new beau perhaps? :D

V.'s coming to Vegas that weekend.

I plan on getting him drunk and taking him to the drive-thru wedding chapel under the guise of going for tacos.

omg!!!! try the little brown church...or if you have the budget i researched the chapel at the venetian... snazzy!

No fucking way-he's coming my way! Quick-someone tell me where in Az?

...hard to imagine, but there are some things that might even be worth it...although I can think of only one.

wow, tacos will do the trick? way cool, woman! anyway, body checking a goalie wouldn't get you much touch, now would it?

I feel happy for all of those people in Arizona. He should do away from home things more often... ahem East Coast, ahem ahem.

I think I'll have to wear my pads while in Vegas... you know, in case those tacos make her get all hands mad for nature.

Posted by: V on November 29, 2004 10:57 AM
What's on your mind?.....
(new here? please read this before commenting)
Remember, this is a fan site.
Keanu Reeves is in no way connnected to this website.
Please do not make a comment thinking he will read it.
Comments are for discussion with other fans.
Thank you.