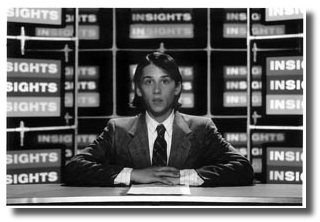 Addiction can take many forms: drugs, gambling, sex, and food are common ones. But for Justin Cobb, it's thumbsucking. A bright but awkward high-school teen, he wants to quit, but nothing works. He tries everything from putting ink on his thumb (a tip from his woefully uncommunicative father) to hypnosis from his New Age orthodontist. He gets so desperate that when a school psychologist suggests using medication to help him focus, Justin leaps at the chance, despite his loving mother's concern. In a refreshingly original and humorous spin, the meds begin to work. But are they the answer or just a more acceptable form of pacification?

Thumbsucker features a truly extraordinary cast that turn in magnificent performances captured by exquisite cinematography--creating an ethereal aesthetic to shape a modern-day fairy tale filled with humor, charm, and fragile love.
Acclaimed graphic artist and music-video director Mike Mills returns to Sundance (his short, Architecture of Reassurance, played in 2000) with another beautifully rendered examination of suburban angst. With his feature debut, he delivers on his unlimited potential, displaying an amazing cinematic dexterity combined with an acute insight into the human condition to produce a visually stunning and thought-provoking portrait of addiction--rooted in suburbia, but relevant to everyone. - Trevor Groth

Thumbsucker debuts in the drama category at this year's Sundance Festival.

Screening dates and times are:

Theater locations/info can be found here.

I can't make the first screening (which isn't technically listed at the "premiere" so there's no telling who might be attending....or not), but I'm going to try and swing the time off for a road trip to the Friday SLC show if I can get passes. Which looks like an adventure in itself.

You know, I never sucked my thumb when I was little, but I did have a blankie. Still do. :o)

I'm rooting for you, Krix - it would be so cool if you could attend one of those Thumbsucker screenings.

I'm going to see Thumbsucker when it comes to my end of the world... I used to be a terrible thumbsucker myself when I was a little girl, so I can relate.

As a kid, I used to suck my thumb while falling asleep, and being in a more or less unconcious state I couldn't really help doing it. Or know that I was doing it, for that matter. My mum ultimately pinned two wash cloths ('washandjes') onto the sleeves of my pajamas in a desperate attempt to make me stop, because the dentist said I would need braces if I carried on much longer. That method worked fine, but was kind of embarrassing... :D

i never sucked my thumb!
but i had a pink and blue elephant!

if you did that there was a bottle of hotsauxe for ya!
jeez!

thanks for posting this...krix!
can anyone go to this event?
))))

I would LOVE to see this. Hope you can make it Krix :-)

actually i'm looking into this.. could be just what the dr ordered!))

Posted by: wanda on December 29, 2004 06:19 AM
What's on your mind?.....
(new here? please read this before commenting)
Remember, this is a fan site.
Keanu Reeves is in no way connnected to this website.
Please do not make a comment thinking he will read it.
Comments are for discussion with other fans.
Thank you.