I wonder if that over-the-shoulder view comes with a 'ceiling' option? 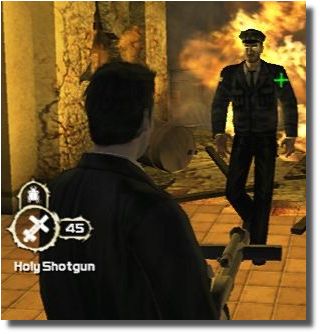 Thanks to John of Straight-to-Hell for this game review that includes several screenshots (for both Xbox and PS2) of the upcoming Constantine video game.


From first impressions, Constantine looks to be a reasonably dark, heavily action-oriented, very solid third-person action adventure. Think Spawn without the campness, Buffy with less humour or Legacy of Kain minus the vampirism - there are strong elements of all of those games, plus bits of Enter the Matrix, Van Helsing and Devil May Cry too, but with a few neat twists all of its own.

The review and screenshots may be a little revealing for some of the movie content, so both spoiler and winged-creepy-thing warnings apply...

When the vid game was announced, my must have-gene kicked in...
but when I read they probably won't get KR to do the v.o., I decided I'll pass it over.

This will go nicely with Van Helsing. Speaking of which--where'd I put it?

What?! They're not gonna have Keanu do the voice-over? That stinks. =/ Oh, well. I'll pass. (Wait. I was never a video-game savvy girl anyway. *shrugs*)

I'm sure they will TRY to get Keanu to do the voiceover, but whether or not he does it is up to him. Pretty much all video games based on movies try to get the original actors to do the voices. Unfortunately it's not always a given. :/

How much talking is there in a third person shooter anyway?

A biting-the-pillow option can be fun provided its done with trust and laughter.

Or, just pillow biting if need be. As it stands now, I have to place my trust in places other than those where pillows reside.

I'll give no quarter on the laughter.

heheh, they did a good job with the back of his head. I have a thing with recognizing people from the back, and the hair/neck/jacket sure looks Keanuy! How pleasant.

I hope that it comes out with a view from the FRONT and those little short video game movie sequences here and there. The view from the front won't be very useful to the actual game playing, but I don't care if there's a monster in front of him and if I lose the game- watching Mr. Constantine's face will make everything be alright. Or, at least, I'll have a damned sexy face staring at me while things AREN'T okay. LOL. I think I might be overestimating the details of the game though. I don't expect a crystal clear portrayal of Keanu's face.

Depends on the amount of cutscenes, krixy. Some shooters are pretty heavy on storyline, so there's a lot of it. Some also have the character saying things while you're moving them about. There's usually a great deal of pre-recorded voice going into these things nowadays.

i remarked that some people responded to me with consideration here.krix shelz creezy .me too i have alot of consideration for you notably for mr keanu reeves.i have a lot of compassion and respect! as you noticed,i like playing because you are a source of enjoy for me.

well the only reason why I would have wanted my son to get this game would have, of course, been K doing the voice over ...especially with his sweetscented whoa...I mean you can almost smell his breath ...sigh....
but am not sure if my son´s going to like it though, being the reasonable kid that he is ...although I thank God for that! lol@cornflakes...I really have to share that point of view I think, a sexy face at least when all other things are amiss....hahahah....and it is definitely his back which is recognizable on the vid pic!!

oh, and I would really be very grateful, if someone might like to explain what "bit-the-pillow-option" means...my English dictionary would not reveal that one to me :(

Yeah. Glad I'm not the only one confused with the pillow-biting thing, susan. ^^

V. sometimes makes no sense. Sometimes it's best to shake his words around like a boggle game and let them sit on the coffee table for a while while you go off and bake a cake. They rarely make sense even then, but at least you have cake.

ah, V. his words may not make sense in any linear fashion, but my god, they are beautiful nonetheless.

but then, i'm a word/language/writing slut -- who needs a cake when you have those lovely words?!

Winged-creepy things scare me, so I keep my discussions of a "ceiling option" to a minimum LOL! I always understand V...and I always laugh too *waves at V*

(alternatively, V. was riffing on my innuendo in the title.)

oh yeah Krix! let me have one please :-)
next week it is going to be my turn, I can offer a French tartes aux poires et chocolat..yeeeeeeeeeehaaaaaa

...it's a famous quote from the French Revolution

Posted by: shelz on September 15, 2004 08:20 AM
What's on your mind?.....
(new here? please read this before commenting)
Remember, this is a fan site.
Keanu Reeves is in no way connnected to this website.
Please do not make a comment thinking he will read it.
Comments are for discussion with other fans.
Thank you.