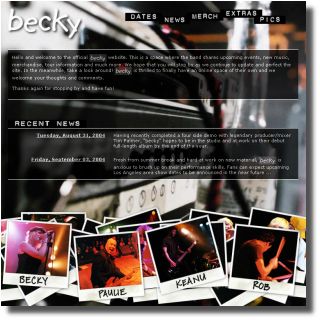 The official becky website has a shiny new URL: www.beckymusic.com and a great new look as well. I LURVE the background image of Keanu's bass head on the front page.

Along with some newsy stuff (demo is done, hopefully a new disc by year-end and the whiff of some possible upcoming LA shows) there's a merch page (t-shirts and tanks) and a hip new photo section too.

And don't miss the "10 things becky wants you to know about Keanu" page.

Check the other band member's lists by clicking their polaroids on the main page.

So update your bookmarks and um.....rawk!

Ok, first of all I just want to let you all know that I was a BRAVE girl: I clicked the pictures in their order: like first Becky, Pauli etc. and not in my typically stomach-heart-head-order: like Keanu, Keanu, Rob, Keanu, ect...Yep, I am proud of me!

Second, I luv the humor of the person who ever wrote this. Cheers, guy! You got it!

Thank you so much for the link, krix. Tho' I think I spotted a typo. Shouldn't #10 be "Reeves is one of the best views in the city"?

I love the merchandise idea.. but they don't have my size.. yet.. bah humbug I was all aready to buy too.. good one bea! LOL.. Rob's my kinda guy but i can connect with Keanu too :) Paulie just rules.. love the 10 things page.. Rob is a man after my own heart LOL!!

Bea! That's exactly what I was going to say! LOL
Thanks for the link krix. I'll be adding this to my favourites.

I agree bea_herenow! That #10 has got to be a typo! ;)
Maybe we could suggest that they change that! LOL

I saw this news yesterday, had time to peruse it already, and I love it! I've already updated my bookmark!

Yeah, I'm sloow on the uptake and it wasn't until reading the other band members' that I realized some of k's were probably humorous... Great site and I've bookmarked it too! But didn't they have an official website before?

This is really trivial, but I think it's terribly sexy that they call our boy Reeves. I don't know why - it just seems sweet.

I also like "especially devastating in suit jackets". Which is more like "one thing Becky wants you to know in case you live in a cave on a hill and haven't had recourse to witness this for yourself". ;)

Or do you think they're using this as a chance for positive encouragement - i.e., Keanu: Take More Showers, Wear More Suit Jackets, etc?

today it s not a hppy day for me ,my parents are very bad with me!and now i don t know what to do .my child and me are very sad.

@bea
*lol* Or maybe they just want to establish for him a new image as (peanuts) 'pigpen' to keep the fans a bit away from him... ;-)

@christelle
Sorry to hear that. Tomorrow is a new day and everything will be good again. Just relax...

Devastating is an understatement

i love the new design, very artsy-fartsy, although i'm a little frustrated that the pictures are not particulary clear. (actually that only upsets me on the pictures of keanu. ;op)

Yep, as per POTD, they have reduced it to "5 things" each--boring things, too. Wonder what's up with that..?


Posted by: Tabitha on September 13, 2004 02:52 PM
What's on your mind?.....
(new here? please read this before commenting)
Remember, this is a fan site.
Keanu Reeves is in no way connnected to this website.
Please do not make a comment thinking he will read it.
Comments are for discussion with other fans.
Thank you.