OK, she really sent it because it has a Keanu article. 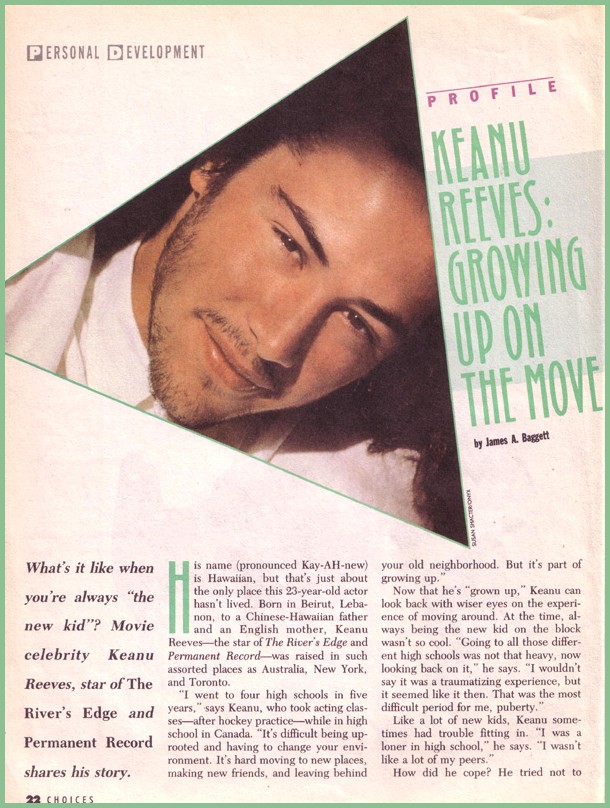 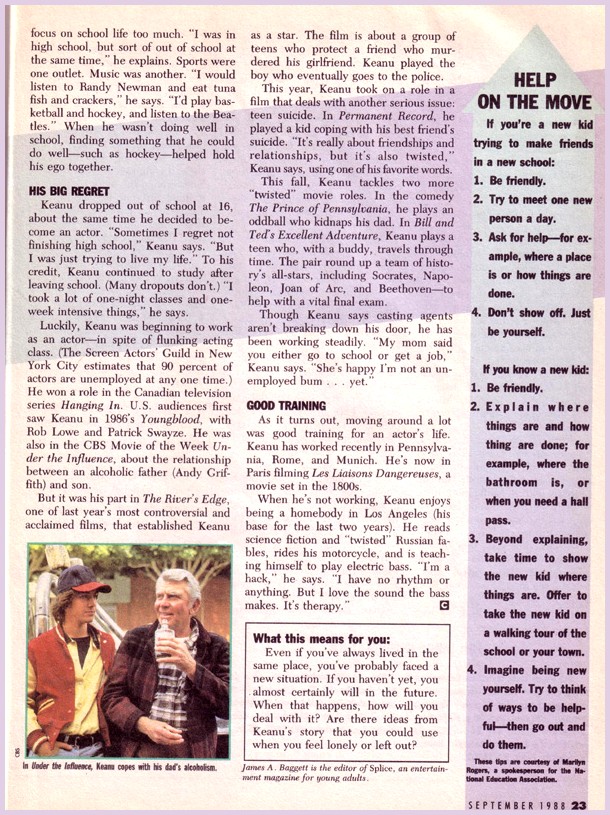 The text of the main article is "after the jump", which is how all the cool kids are saying "in the extended entry" these days. I'm feeling better about myself already.

Keanu Reeves: Growing Up on the Move By James A. Baggett What's it like when you're always "the new kid"? Movie celebrity Keanu Reeves, star of The River's Edge and Permanent Record shares his story.

His name (pronounced Kay-AH-new) is Hawaiian, but that's just about the only place this 23-year-old actor hasn't lived. Born in Beirut, Lebanon, to a Chinese-Hawaiian father and an English mother, Keanu Reeves--the star of The River's Edge and Permanent Record-was raised in such assorted places as Australia, New York, and Toronto.

"I went to four high schools in five years," -says Keanu, who took acting classes-after hockey practice-while in high school in Canada. "It's difficult being uprooted and having to change your environment.-It's hard moving to new places, making new friends, and leaving behind your old neighborhood. But it's part of growing up."

Now that he's "grown up," Keanu can look back with wiser eyes on the experience of moving around. At the time, always being the new kid on the block wasn't so cool. "Going to all those different high schools was not that heavy, now looking back on it," he says. I wouldn't say it was a traumatizing experience, but it seemed like it then. That was the most difficult period for me, puberty."

Like a lot of new kids, Keanu sometimes had trouble fitting -in. "I was a loner in. high school," he says. "I wasn't like a lot of my peers."

How did he cope? He tried not to -focus on school life too much. "I was in high school, but sort of out of school at the same time," he explains. Sports were one outlet. Music was another. "I would listen to Randy Newman and eat tuna fish and crackers," he says. "I'd play basketball and hockey, and listen to the Beatles." When he wasn't doing well in school, finding something that he could do well -such as hockey - helped hold his ego together.

Keanu dropped out of school at 16, about the same time he decided to become an actor. "Sometimes I regret not finishing high school," Keanu says. "But, I was just trying to live my life." To his credit, Keanu continued: to study after leaving school. (Many dropouts don't.) "I took a lot of one-night classes and one-week intensive things," he says.

Luckily, Keanu was beginning to work as an actor -- in spite of flunking acting class (The Screen Actors' Guild in New York City estimates that 90 percent of actors are unemployed at any one time.) He won a role in the Canadian television series Hanging In. U.S. audiences first saw Keanu in 1986's Youngblood, with Rob Lowe and Patrick Swayze. He was also in the CBS Movie of the Week Under the Influence, about the relationship between an alcoholic father (Andy Griffith) and son.

But it was his part in The River's Edge, one of last year's most controversial and acclaimed films, that established Keanu as a star. The film is about a group 4 teens who protect a friend ' who murdered his girlfriend: Keanu played the boy who eventually goes to the police.

This year, Keanu took on a role in a film that deals with another serious issue: teen suicide. In Permanent Record, he played a kid coping with his best friend's suicide. "It's really about friendships and relationships, but it's also twisted," Keanu says, using one of his favorite words.

This fall, Keanu tackles two more "twisted" movie roles. In the comedy The Prince of Pennsylvania, he plays an oddball who kidnaps his dad. In Bill and Ted's Excellent Adventure, Keanu plays a teen who, with a buddy, travels through time. The pair round up a team of history's all-stars, including Socrates, Napoleon, Joan of Arc, and Beethoven - to help with a vital final exam.

Though Keanu says casting agents aren't breaking down his door, he has been working steadily. "My mom said you either go to school or get a job," Keanu says. "She's happy I'm not an unemployed bum ... yet."

As it turns out, moving around a lot was good training for an actor's life. Keanu has worked recently in Pennsylvania, Rome, and Munich. He's now in Paris filming Les Liaisons Dangereuses, a movie set in the 1800s.

When he's not working, Keanu enjoys being a homebody in Los Angeles (his base for the last two years). He reads " science fiction and "twisted" Russian fables, rides his motorcycle, and is teaching himself to play electric bass. "I'm a hack," he, says. "I have no rhythm or anything. But I love the sound the bass makes. It's therapy."

MY FAVORITE KEANU PIC IS RIGHT THERE IN THE MIDDLE UP TOP ON THE FIRST PAGE IN THE WHOLE WIDE WORLD!! Great article.. Thanks Lisa and Krix!!

...all those years ago, aww!
How sweet!
Thx krix and Lisa.

Glasses and a home permYEESH! Who wants that?!

...I had a home perm once, it was all frizzy and hard to handle. Someone please find me a good stylist will you?!

Glad I could help with your *ahem* esteem issues. ;)
I can't say that I was ever the "new kid", but I was the victim of 1 or 2 home perms that went terribly wrong! I can still remember thinking that I'm never gonna leave the house! LOL
Ohhhh to be a teen again........No thanks! ;)

I spent a good part of 8th grade looking like I had a poodle on my head.

You know, in this picture Keanu looks just like my first ex-hubby (except for eye color, ex-hubby's were bottle-green). Must have been why I married the man!

That's okay Nettie, I'm glad someone got a giggle out of my comment!

"But I love the sound the bass makes. It's therapy"

wow... can i comment?? it's a great article...very cute and inspirational...aawwwww... you guys are funny!
i didn't go the home perm route... my hair grows curly that way... i always tried to figure out how to make it not curly...did someone say 8th grade? yikes... i had to move to LA to figure out that my hair was ok just the way it was!...!! just let the hair be... let the hair be...! omg... good for keanu for self teaching on the bass... i started mandoline and guitar at about 17 but i got involved in work and life....
been thinking about starting back up again.

I am not talking here about my 15 years permanently perm experiences (sounds like I had a few ah?) ... Until I had a hairdresser who told me she is not doing perms to my hair anymore. So I found out that I do have permanently curls. Bye bye all the money I spent! *lol*

@wanda
so youve choosen work and life as your therapy ;-)

if I can be of any assistance to anyone wanting to learn German *winks* here I am...the German girl in your community sharing the same passion...don´t hesitate

enjoyed reading the article, thanks so much for that, it made me remember how I felt when I went to school and had to change schools so often...sigh...playing bass is therapy...just love that sentence...as I sing, and always say: singing is therapy*smiles* love this page ever more...

LOL@Creezy! I think I need your hairdresser!

I hear ya, Kris. I spent grades 6-12 obssessed with fringe bangs. I don't know why I thought they made me look cool. Combine that with the huge glasses, and you have nerd city. I look back at that and cringe. What was I thinking?

I moved around a lot as a tyke (AF dad), and it got to the point where I didn't care about being the new kid anymore. You just sort of get used to it.

hi creezy! ummm... not sure how to answer that... work and life as therapy... i think you need therapy f r o m work and life, unless of course you are a therapist!

more specifically... i really enjoy my time on the stringed instruments and just meant that I admire someone like Keanu who picked up the bass and stuck with it...

as for my therapy... i choose love! it's the best one because...it's love! life without it... you d o need a therapist!

Posted by: wanda on August 29, 2004 01:39 AM
What's on your mind?.....
(new here? please read this before commenting)
Remember, this is a fan site.
Keanu Reeves is in no way connnected to this website.
Please do not make a comment thinking he will read it.
Comments are for discussion with other fans.
Thank you.