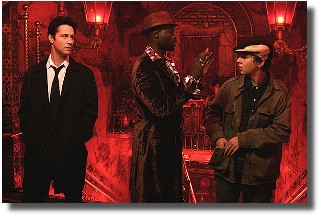 Well, it's no Holy Shotgun, but it seems that arming Constantine director Francis Lawrence with an 18-minute trailer and sending him into the Comic-Con and Wizard World conventions is improving the buzz for the film.

Thanks to Ade for finding a WW report from "Aaron" at the Millarworld forums (spoilery bits are in a white font, highlight with your mouse to view):


Reisch, Richard, Julian and I all caught the 18 minute preview of Constantine in Chicago the other day, and personally speaking, I didn't think it was nearly as bad as anyone of us expected. Aside from a clip at the end which features a [slight spoiler]giant shoot out with Keanu weilding a jesus shotgun- no shitting, a giant shotgun with a cross on the front[/spoiler]- the movie seemed to really have adapted it's feel from the book. Constantine comes across as an asshole, who will do whatever to get what he feels is best for the world.

Clips included him [spoiler]putting a cigarette out on a little girls' face to force a demon out, finding out he has lung cancer, and a great scene that could have been written straight out of hellblazer when he asks the arc angel Gabriel why he's dying[/spoiler].

Reeves was... well, he was Reeves, but overall he was trying his best and I feel like the script was pretty good. There were a few jump out of your seat type moments that got me, partly because I'm a pussy in movies and partly because they had the noise so fucking loud in there.

At the end the director came out and talked a little, basically saying how he and the crew- he called the origional version of the script "crap" and mentioned that Reeves' input helped drive the newer version towards something more like a real Hellblazer adaptation- had fought the studio tooth and nail not to simply make "Matrix 4- With Demons." He also aknowledged that longtime Hellblazer fans were intially pissed off but that everyone he'd shown the clip to had liked it, including Karen berger. The guy seemed to be doing a good job with the crowd when we got up to leave and spend mroe money, but we didnt get fully out the door before the director made the comment of the con-

At which point Richard burst out laughing so hard that we had to rush him away before we got beat up. Seriously, I thought he was gonna pop a brain stem.

Anyway, the others can drop by with thoughts, but I'm hopeful for this movie. Work of art? No. Direct adaptation? No. Way, way better than anyone has expected? Hells yes. I think I may just go and see it now.

Yeah, snarky to Keanu in parts, but note the part in bold.

Also, I'm not sure who "Bug" and "Sleazy" are, but this is from AICN courtesy Rogan:


Sleazy: 18 minutes of footage from the upcoming film was shown, followed by an appearance by director Francis Lawrence. This is one of those projects I've been expecting to suck. I've been following this character for all of his nearly 200 issues, plus miniseries, one-shots, appearances in SWAMP THING and other titles, etc. Like everybody else who reads this stuff, I figured Keanu was dead wrong for the role and hated that they moved it to LA.

Bug: I on the other hand, have never read an issue of HELLBLAZER, so I didn't really have any opinions leading up to the preview.

Sleazy: After seeing the footage, some of my concerns have been addressed, but others linger. It looks sharp as hell, and the pacing and the palette look appropriately deliberate and creepy. There were a lot of moments (and entire scenes) that were clearly borrowed straight from the comics, most notable Garth Ennis' inaugural story on the book. Papa Midnight, Gabriel...they seem to be handled fairly well. There was enough in that 18 minutes to make me think it'd be a decent genre film. Unfortunately, there's a scene that's so completely out of character it makes me cringe: an obviously Blade-inspired scene with [spoiler]Constantine using a shotgun that looks like a cross and fires holy water rounds[/spoiler]. It's so not the way John would ever handle things that it's hard to swallow. I'm still hoping for the best, and again, the director really sounded convincing when he talked about making choices that stayed true to the character, but I'm still a little worried.

Bug: I kind of liked the preview. It was moody and Reeves was pretty restrained. [spoiler]The exorcism scene and the scene on the bus with a youthful Constantine[/spoiler] were especially spooky. After the preview, I asked Brian Azzarello what he thought of it. The former HELLBLAZER scribe said that the clip blew him away and that it reminded him of a David Fincher flick. Pretty high praise.

Now what WB needs to do is send Francis and his mighty footage into the "lion's den" at The London Comic Festival this October.

I reserve the right to tell all the nay-sayers "I told you so". *crosses fingers*

This from ADE? whoa indeed... I haven't been back for a while, because I just get tired of the Keanu-bashing (as if it's a given..) but I have to agree with Mikey.

Notice there has been absolutely NO mention of Shia LeBoeuf..assuming he wasn't in any of the 18-minutes? probably a wise idea..

so maybe most of the comic fans will be satisfied with it...and i'm really starting to get a jones for keanu as bastard!

Oh, no. That was VIA Ade, I think the Millarworld poster was an "Aaron". Sorry for the confusion. I'll clarify in the post.

Ade is much more articulate, sophisticated and otherwise dreamy.

Hee, this is really starting to look good -
as we true KPhile Visionaries have known all along!

I want to highlight the white parts sooooooooooo bad. *sitting on hands*

The more I know about it, the more I can't wait to see it!

i love the intrigue of this way cool entry... i mean the white spoiler text is very clever...
anyone who saw that 18 minute special footage of constantine( i saw it along with 6500 other lucky folk in san diego - the suspense was nothing less than palpable) will hopefully agree that this is one cool/hot film... i have read that it's not hollywood's job to educate, but to entertain... yet still, i think an interesting impact will be made... i'm glad that the true blue officianiados of *heckblazer* are open to this depiction of their fav comic book series...

The more I read about Constantine the more I cannot wait for it to hit theaters. I may be foaming at the mouth by the time it reels around. I am with Zen, had to sit on my hands to keep from exposing the white font.

Posted by: shelz on August 25, 2004 07:41 AM
What's on your mind?.....
(new here? please read this before commenting)
Remember, this is a fan site.
Keanu Reeves is in no way connnected to this website.
Please do not make a comment thinking he will read it.
Comments are for discussion with other fans.
Thank you.