silly tabloids, always getting it wrong 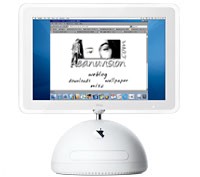 KEANU TO BUY A MACINTOSH

Hollywood hunk KEANU REEVES has finally accepted the power of the internet and bought an APPLE MACINTOSH, according to friends.

A close friend says, "Kenau [sic] and technology have known each other for years. In May (04) they got together again and over the past few months, Keanu started thinking about DSL vs. cable.

"He has spent weeks picking out an email address. Apple said 'Yes' when he asked if "TheOne@mac.com" was taken. It will just be a simple addy, Keanu hates fuss, attention and a string of numbers before the @." He's told pals to expect the lame joke forwards and funny pictures to start hitting their inboxes later this week.

This is the funniest thing I've read in ages. Thanks for the great giggle.

what a hoot! Krix thanks for sharing your wit with us! Most excellent humor!

You crack me up.

Well we all know he's doing it to access this site. ;)

You're fucking hysteral. I love you too darn much!

Simply hilarious!
OMG, krix, this is the best I've read in ages!!

Too freaking funny krix, thanks!!! Now THIS is worth reading. LOL

bwaaahahaha! and I read this at work, fortunately the boss has gone... of course, Keanu being the stylish guy we all know he is (hah hah) would have a Mac.

*ahem* krix, thank you for turning my day around! you SO rawk!

ROFLMAO@Krix! Too funny...I love it!

There's true love in that Macintosh...and I do mean the computer ;-)

I am rolling here!! krix, you crack me up girl, love ya!

krix, you are hysterically funny! You are a wild and punny girl! Thanks for the laugh ... I needed it after reading the latest "news". As always, you add laughter to the hysteria.

Assuming he buy it this month, August, is that considered fall or autumn?

LOL!!!! Omg, you kill me! :-D
Bwahahahaha, that shocking news will cause a shockwave throughout the community of PC-users *snork*

And oh! I must change my spamblock! I mean, I don't want to miss out on any lame joke FW's and pictures now that he's on the net ;-D

Now that's more like it -- Keanu Reeves to buy a MacIntosh in the Autumn -- I knew they had it bass ackwards -- ROTFLMAO -- lousy tabloids!!!!

Maybe he can have some DeCadenet wine with that. Well, it sounds like a wine name. :-D

Been lurking as a Keanu appreciator for a while.
Appreciate you too, Krix: your writing and your rules.
Great work, like today. :-)
Thanks!

I wish theone was not taken, someone should give up their account, because then we could go and be the ones who joke mail him. lol yea right I don't think he'd actually be that obvious...
I hope he got the message somehow to look at that birthday greeting online. That'd be funny, to spam him w/ his own face. BUY THE MATRIX NOW!

Sigh, I wish I could have been the one (no pun intended) to show him that ethernet cable... :-/

HEHE sorry, but i'm just thinking of him, opening his email, only to see it filled w/ tons and tons of ADs, including the one of himself, telling people to think different think Keanu. That'd be strangely ironic. How weird it would be to be Keanu if that happened.

HEHE the two articles are so very parallel it's great! Ingenious, Krix!

...and here's an ad:
"Apple's Macintosh...sweet and delicious"

I love my Macintosh. But I sure hope he doesn't marry one, I gotta say. Give me a few more months to get over my obsession, baby. Don't take away my silly daydreams just yet.

mehhh he'll still be the same keanu we all love, even if he did get married...

Absolutley fabulous - I am roflmao here - and just have to say, that I think you've gotten to the "core" of the situation..........

Posted by: Jolsie on August 18, 2004 09:25 AM
What's on your mind?.....
(new here? please read this before commenting)
Remember, this is a fan site.
Keanu Reeves is in no way connnected to this website.
Please do not make a comment thinking he will read it.
Comments are for discussion with other fans.
Thank you.