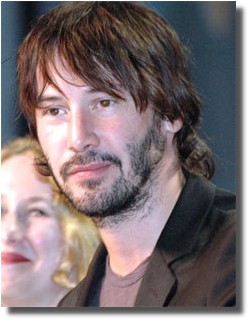 
Don't expect Keanu Reeves to play another reluctant hero with special powers who's called on to save the world in his upcoming supernatural action flick Constantine.

Scratch that. That's exactly what to expect, but Reeves says he found the hard-boiled magician John Constantine an appealing character despite any resemblance to his role as the savior of the Matrix trilogy.

"The character itself is so beautiful," Reeves said Friday during a panel discussion of the Warner Bros. film at Comic-Con International. "It's a guy who's dealing with issues of Heaven and Hell and how the world works. He's not happy about how the world works -- and I can relate."

"At the heart of it all, though, was Reeves, whose gritty, SFW turn as the nihilistic Constantine (rapidly encroaching lung cancer and all, a storyline taken from Garth Ennis run on Hellblazer) had the geeks eating out of the palm of his hand.

And, as if to reciprocate, the notoriously private and often prickly Reeves was personable and fun during the presentation (during which he was asked 90% of the questions), flashing a constantly bemused smile as his every word was greeted with shrieks and shouts.

At one point he even leapt down from the stage to receive a present from an endearingly eager fan, who declared that 'You are DA BOMB!' Luckily, it turned out to be an actual present and not a thinly veiled bomb threat.

Anything where there's a great enthusiasm and where there s a coming together to share what you think is cool, I think it s awesome, said Reeves of the Comic-Con experience, before expounding further on the appeal of Constantine.

I ditched the accent, he laughed. But I really loved the guy. I loved his anger. I loved his wry sense of humour about the awfulness of the world and what that's turned him into. He's like a warrior in this world of shit, and he's trying to deal with it. "

SuperHeroHype has a look at a really ugly poster.

Ooooh, one more (via keanuweb). Cinescape.com has a nice long SPOILERY rundown of the footage shown. I'm not going to read it, but if you want to, go HERE.

I am glad Keanu did so well. Feel a little sorry for the rest of the panelists though.

I have no idea.

Can't you just hear all the little geeks snickering when he said "shit"?

I think it might mean "So Fuckin'What" but that's just a guess.

I think I like that last one better, Krix. Whoa indeed.

"so [the] fuck what" Constantine fits.

I like the Sexy Fucker Whoa better though. I'll go with that one.

did i forget in my 2 am rundown to mention the very cool holy shotgun scene!!!! it's my personal favorite!! soooo far!

i did get 2 of those posters... also WAY cool!!!
will save 1 fer ya krix! i heard that keanu signed some that were given away as some kind of prizes as well!!!

did i mention that me and some other girls screamed 'we love you keanu!'!!!

You should keep the poster Wanda, then you can put one up and keep the other in mint condition. I just got done bitching how ugly it is so it wouldn't be right for me to have it.

in the *here she goes again* category

...(during which he was asked 90% of the questions), flashing a constantly bemused smile as his every word was greeted with shrieks and shouts.

yeeessss...... the audience also had quite a personality! i shrieked out to him these words...'you're doing great!' in response to *something* he said... and me and a couple of other girls shouted out...'we love you keanu!'

oh... OK!!!!
double drats! just what i was gonna ask mr. reeves!!!! will you be my prom date!? I know we missed the last prom, but we can make up for it!
if i pay for dinner will you give me a hello kiss!? and one of those corsage thingys...
you want me to have your baby!? OOOOOKKKKK!
hey... I've a birthday present shirt for keanu in my bag too!

hey come on over this weekend...pick up your first birthday present! ALL the family will be here!!!!!(that's you too baby!) stop on by! bring yer friends! i know what it's like to stand up a l o n e in front of 6500+ people + video tape and and ask for a kiss from keanu!!!!! (I should have just offered him the shirt as a second birthday present! blame the mind reel!!! yeah!) tee hee!!! *eyes get r e a l l y big* *knees... give way*
i'll make you something tooo drink and tooo eat!
we'll visit....

maybe there is a way for me to get that shirt to him before his birthday!!!!!

She got a double dose of Reeves this week, so I don't expect she'll come down for days.

Let's reel it in a little bit though, ok w.?

*crez learned a new english word today: 'prickley'. And she loves it. She doesnt think its a word she would ever use for Keanu (ok, sometimes for his look in most of his fan-pix) but she thinks for a hornet its a nice description.

I should have gone I should have gone I wish I did I wish I did I wish I coulda!
"But it was Reeves that the crowd roared for. One woman who declared herself a 14-year fan of his got permission to approach the heavily-guarded stage to give him an early birthday present."
*Twitches*
"And, as if to reciprocate, the notoriously private and often prickly Reeves was personable and fun during the presentation (during which he was asked 90% of the questions), flashing a constantly bemused smile as his every word was greeted with shrieks and shouts. "
*Topples over dead*

I am also looking forward to this film -- I have never seen Keanu Reeves in the theater. It may sound silly to you all but it constantly amazes me how beautiful he is -- silly...

It's not silly! It amazes me all the time too! Wow you've never seen him in theatres? Well, then again, I think my first Keanu-in-theatres-movie was just SGG. Maybe one other one.

Posted by: cornflakes on July 24, 2004 09:50 PM
What's on your mind?.....
(new here? please read this before commenting)
Remember, this is a fan site.
Keanu Reeves is in no way connnected to this website.
Please do not make a comment thinking he will read it.
Comments are for discussion with other fans.
Thank you.