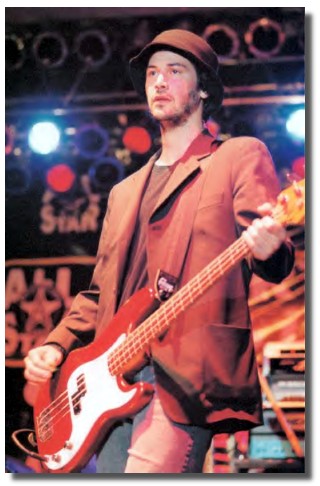 I hope everyone had a great weekend. I never did find any of the cheap-yet-tasty wine. Vodka Sunday was bumped to Saturday this week, so as to be merely hungover for brunch with daddy, as opposed to completely lit.

For anyone that's interested, there's a new track at the Vibemerchants site, Ultra Mellow.

I have to go get some coffee.

If I still drank, two buck chuck sounds like it would be right up my alley. :)

Have to say I prefer the stetson to the Holly Hobbie effort. What do you think he's looking at?

Where does he always get those contraptions?
*gah*
but then I have to admit, I'm not a hat kinda girl!

Maybe at this big banner, reached out of the crowd to him, made by some smart chicks and what says: "Justin Timberlake, I want to have your baby!!!"

OK, ok I had defenitively a scary day!

I love that picture, he has a sort of far off gaze face that makes him look dreamy. It's nice to see a dreamy Keanu face at work!

wow!! i went to vibe merchants but alas... no sound on my computer... will have to fix that too!!! however, Ultra Mellow sounds like a great title and probably a great song....and just made arrangements to attend becky show at chicago ridgefest.... woo hoo!!! maybe he's lookin at me!!!!

I think next time I see him I will give him my HOB beanie and my golf hat as I never wear them. LOL!

any chance on you posting lyrics to ultra mellow?

Aww, it's great! nice bass line on Ultra Mellow, too... and as Zen said, a wonderful website. way to go, Vibemerchants!

ultra mellow is a right fine song, I like it, I really really like it, it even fits my funky mood right now! way to go guys!!!!

:)
I'll try to get Roi to post some lyrics soon.

:)@shelz what is a HOB beanie....I would like to imagine him with it, but obviously have some difficulties with it...hehe

Posted by: susan on June 28, 2004 11:02 AM
What's on your mind?.....
(new here? please read this before commenting)
Remember, this is a fan site.
Keanu Reeves is in no way connnected to this website.
Please do not make a comment thinking he will read it.
Comments are for discussion with other fans.
Thank you.