Yet of all the words to describe him, narcissistic is not one

Thanks to creezy via Keanuette for this... 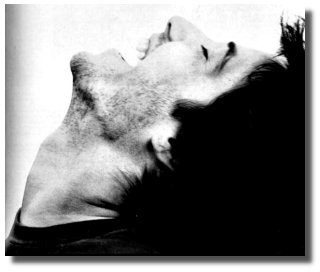 Keanu is reported to be starring in "Echo", a twelve-minute black-and-white short film directed by Stephen Hamel.

This should be good, I've always loved what Hamel captured in photographs of Keanu. Of course, for all our yard-long frozen margaritas and Penn and Teller shows, Las Vegas doesn't have an art house theater so I hope this makes it either to CineVegas or shows on IFC.

This film is based on the Greek myth of Echo and Narcissus, though I'm pretty sure it will be a modern retelling, so sorry....no toga.

Refresh your memory of the myth below thanks to this site.

Narcissus was a very handsome mortal lad. All the maidens longed to be his, but he would have none of them. He wanted someone as beautiful as he was handsome. Heart broken maidens were nothing to him. Even the saddest case of the fairest nymph, Echo, did not move him. Hera happened to come inquiring where Zeus was, as she suspected him of seeing one of the nymphs. Echo's chattering kept Hera diverted from her investigation as all nymphs left. Hera turned against Echo in rage. She condemned her never to use her tongue again except to repeat what was said to her. "You will never initiate a conversation; you will always have the last word."

Echo ran to him and threw herself at his feet! Narcissus, confused, picked her up and said, "Oh, you are just like all the other nymphs who try to kiss me and tell me 'I love you.'"
"Love you!"

Her pushed her away, turned and went on his way. Echo prayed for help silently. Nemesis, the goddess of righteous anger, heard Echo's prayer, for prayers to not have to be spoken to be heard and replied, "May he who loves not others love himself."
As Narcissus bent over a pool for a drink, he saw there his own reflection and for a moment thought it was a beautiful nymph, as beautiful as he was handsome, and fill in love with it. He stayed by the pool vowing he would stay there until the nymph came out. Echo was nearby and heard Narcissus' plea, "Won't you ever come out?"
"Come out!"
As Narcissus came close to dying, he faintly cried, "Farewell!"
"Farewell!"

Narcissus became a very handsome flower whose head bends toward the water rather than the sun. The flower, narcissus, is a daffodil, one whose flowers have a short corona and are usually borne separately. The word "narcissism" means egoism, love of oneself.

Yet of all the words to describe him, narcissistic is not one...

What was I sayin'?

so what does this mean...

Wow! Keanu is in a non-stop work or what? I love how he is in so different roles all the time. We have Thumbsucker, Constantine, A Scanner Darkly, maybe Tripoli, and now Echo! And a short art film is really a good thing to see... can be very interesting. He isn't narcissistic, but with sure he is gorgeous enough (beyond gorgeous...) to play the character. And has the talent too! Can't wait. ;)

that i s a great poem!! very nice

No...he is NOT narcissistic. How much further from that can one person be???

Just thought a while about all actors I met so far. Well, everyone of them I would call kind of "narcisstic". Some more, some less. Dont think its too bad beeing it a bit would call it kind of helpful in this business.

krix, yesterday I was thinking  Echo and Narcissus, how was this myth going again ? Your support is perfect, you leave nothing to be desired! thx!

i agree that being kind of narcissistic is helpful in show business. in a way, these people are selling themselves, so you almost *have* to be "into" yourself to a certain degree.

keanu gives me the impression that he knows how to keep his narcissism from getting out of control. i think he is definitely aware of his beauty, but he doesn't dwell on it. it seems to be a very conscious choice on his part, especially the way he dresses down alot and his self-effacing personality. almost as if he knows we would all be permanently blinded if we ever gazed upon his full, un-scruffed beauty for too long. lol. well that's my impression, anyway. :o)

LOL@caslk!! Yeah, I agree about the "permanently blinded" part!

krix, we have about half a dozen art movie theaters in my area and we still don't get everything... *sniff* especially something that's only 10 minutes long. It would have to be with a bunch of other films. And we don't get any decent cable channels like Bravo or IFC so that's out. Too bad Ke didn't play golf, since we get the Golf Channel instead. *snork*

Nudel has a good point; how the heck are most of us going to get access to this artsy little film?

Yeah, you just want to...uh...admire it. Look at it closely...and...uh...identify the major musculature.

Seriously. My interest is scientific.

Posted by: Tabitha on June 7, 2004 07:57 AM
What's on your mind?.....
(new here? please read this before commenting)
Remember, this is a fan site.
Keanu Reeves is in no way connnected to this website.
Please do not make a comment thinking he will read it.
Comments are for discussion with other fans.
Thank you.