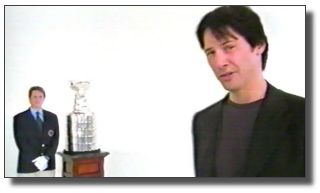 Here's the game schedule if you're interested in watching the whole series:

I'll have to wait until the ABC broadcast on Saturday to try and catch Keanu's ad. For now, there are some screen grabs over at Club-Keanu.

If I may venture a quiet little "yay" - those Tampa boys were just mean.

...another reason for moving to another continent:
the K ad.
Europe is getting ready for the Soccer Championships
and the Summer Olympics, meanwhile, gah!

I will in fact be working and not watching...will read the outcome in the paper.

...if I would have seen the add, is that like watching the Superbowl for the commercials? LOL!

thanks for the schedule, krix! now maybe i'll get to see him after all...

i see he's getting his money's worth out of the dark tshirt/black blazer.

I missed the commercial last night because I was studying, but Julie! you will be satisfied to hear that I watched two periods just for the hockey. ;) Will have to catch our cutie during the next game.

Yeah, I was beginning to wonder if you were a REAL Canadian after you wrote that Zen ;-)

Pah. Only watching hockey for Keanu-ads. Only us Europeans can get away with a statement like that ;-D

Personally...I'd watch it on TV for the "Keanu Ad"...but I prefer to GO to hockey games myself, however Redwing tix have...at least until now...been hard to come by


Posted by: Tabitha on May 27, 2004 08:34 AM
What's on your mind?.....
(new here? please read this before commenting)
Remember, this is a fan site.
Keanu Reeves is in no way connnected to this website.
Please do not make a comment thinking he will read it.
Comments are for discussion with other fans.
Thank you.