Thanks to J. White over at the hellforum for this article from Comics Continuum:


Expect to see several projects to tie in with the release of the upcoming Constantine movie, editor Will Dennis said Sunday at the Vertigo panel at Wizard World Philadelphia.

"With the Constantine movie, there will be a lot of Hellblazer things that will turn a lot of people's heads," Dennis said.

Dennis said he couldn't currently elaborate, but one of the items will very likely be an adaptation of the film.

Constantine, starring Keanu Reeves, is targeted to open in theaters on Feb. 11.

The casting of Reeves and the Americanization of Constantine have created controversy around the film, but the Vertigo editors at the panel said the movie can be successful.

"He's read all the comics, he's read all the stuff out there," Dennis said of Reeves. "He's taking it very seriously. He's done good work in certain parts, so it'll be interesting to see.

"People will be surprised at how much they have captured of the comic. Hopefully people will go in with open minds. And, really, it's exiciting to see a Vertigo movie."

Added editor Jonthan Vankin: "Having read the script, they've made an attempt to capture the comic and bring some new elements for the movie."

I think the comic guys will be OK with something like a special title adaptation, as long as it doesn't have any lasting effect on the original Hellblazer title.

And I bet some of them would buy action figures.

I'm pretty sure he's being sarcastic.

Still, I would totally buy a Ceplavite plushie or maybe one of these... 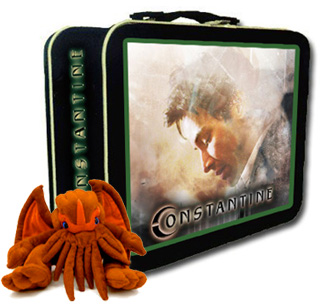 ...oh yes, pleeeaaaaze! Have you had a word yet with the WB marketing dept.,
Krix, to make the not available thingie available?
I'd love to have a lunchbox like that...

I don't think the comic book guys would know what to do with a HolyShotgun condom, would they?

Yeah, I know - that was mean (teehee)

Very mean. May the Beanie Cthulhu have mercy on your soul.

Heee! Where did the plush toy arrive from all of a sudden?
Twasn't there when I first looked in!
So cute!

Damn, Chianti. :o) Because comic book guys are such strangers to merchandising. Maybe he doesn't cross over.

krix, I'll see your Beanie Cthulhu and raise you a stuffed Annunaki.

I would so buy that lunchbox. Does it come with a Thermos shaped like the Holy Shotgun?

Apparently the statistics WERE good LOL!

...I have always said Cthulhu makes an awfully cute beanie

I never thought that the day would come when I would actually feel the absolute craving to own something that looks like a squid, LOL! It looks SO cute, whatever it might be! :-)

And condoms shaped like a shotgun? Hmmmm... I wonder if there's a market for that. ;-D

Haven't you ever had a condom break? There's a whole LOT of praying involved.

Holy Shotgun condoms  isnt Constantine having the devil inside? ;-) and the Constantine lunchbox contains cigarettes  what makes again sense to the condoms  for the (moment) ah prayer after

Posted by: shelz on May 26, 2004 02:30 PM
What's on your mind?.....
(new here? please read this before commenting)
Remember, this is a fan site.
Keanu Reeves is in no way connnected to this website.
Please do not make a comment thinking he will read it.
Comments are for discussion with other fans.
Thank you.