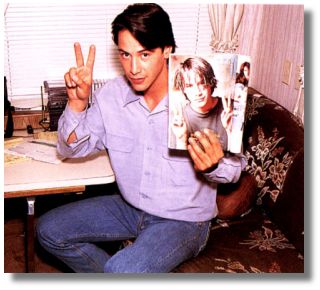 Double your pleasure with Doublemint gum.

"Peace and luv from me and Tiger Beat!"

Hmmmm. No. Nothing near as funny as the posts before mine.

He's doing double peace signs in the photo. So all I can think of is "69, Dude!" I can't wait to hear Krix's caption.

I actually don't have anything. I can't get past the ugly couch.

"Two heads are really better than one".. and
Buy one get one free.. :)

The ugly couch? I can't get past the tight jeans. I'd never even noticed there WAS a couch.

"Yup, I still got it! I can still hold up two fingers like I used to in my younger days."

I don't know why, but I feel that is one of the weirdest Keanu photos I've ever seen.

Bwah! Kaz, that must be an Aussie tune but it reminds me of:
~'Little bunny Foo-Foo, hopping through the fo-rest',
Scooping up the fieldmice and bopping 'em on the head'~....

"2 for 1 Keanu"...Keanu at a price reduction??? I know he doesn't need THAT market strategy!

Yes, I am aware that I am totally awesome... after all, my pictre is in this magazine not one, but TWO times.

Omigosh... i just noticed- is it just the light, or is Keanu wearing a purple shirt???? Where is this pic from? What was he doing at the time? It's so weird... not bad... just weird

"little rabbit in the woods...little man by the window stood...saw the rabbit hopping by...knocking at my door..."

Is it just me or does this look like it's in a trailer, the sort actors have on set? I'm thinking that explains the 'sofa' and the pull-down table..

Yeah, def in a trailer, looks like during Point Break. Maybe this was the day he filmed the scene with the lawnmower and this was him just about to cross his fingers and say "not the face".

"WHICH FINGER SHOULD I PICK MY NOSE WITH??"

Well, technically this is a "mis-en-abyme", (Gide's French term -meaning literally 'put-in-the-abyss'- for the imbedded, sometimes infinitely regressive, image or re/cit reflecting some aspect of its enframing image/text; e.g. the portrait of a subject which contains the portrait of the same subject, a process which could virtually go on infinitly). And I think this is the most beautiful one I've ever seen...

well...if the pen is mightier than the sword and a picture is worth a thousand words are 2 pictures worth 2 thousand???...caption 1: "It IS really me in that picture!" ... I said peace and i meant peace.... caption 2: "Peace through superior pictures with Keanu!" ...there are 2 pictures but only 1 of me!!! (we know that one!)...picture as invitation... caption 3: "This picture is worth 2 THOUSAND words...bring this picture with you to my big birthday bash in the desert....somewhere!"
oh... I FINALLY GET IT!!!....this is peacwithkeanu3 and it goes with peacwithkeanu1 and peacewithkeanu2.....caption: "Ilove you 2 I love you 4 I love you more and more and more and more!!!!"

Hum... I think this picture is too private, with the little ugly sofa, and the messed up table, his meek expression; maybe it should belong to family album, not on the internet. O_o
And it gives out the feeling of a matrioshka, those Russian dolls where one smaller doll is inside a bigger one, and so on Or that "mis-en-abyme" thing breeze talks about.
Either way, I still think its weird. ^_^;

It was taken in his trailer on the set of Point Break.

I recognized it as a trailer...I thought he must have been out camping with the family HA HA!!

Hmmmmmm...Let's see...This picture looks like he was forced into holding up the magazine & giving a peace sign. My caption would read, " Hey camera-guy, you have 2 seconds before I shove the camera where the sun don't shine!"

Its two, TWO, two Keanus in one!

Okay, so it's not very creative. I'm having an off day.

just as a note... i just love reading everyone's comments... very creative and many times the highlight of my day! so thankful for this and the many other fabUlous keanu sites and the lovin folks on them and runnin them....)))

@wanda
thanx for taking the words out of my heart

"Take two of these and nudge me in the morning"

LOL at hanapana...
i agree w/ reen and pen, lol, that's what i was thinking at first too!

Posted by: cornflakes on May 20, 2004 08:09 PM
What's on your mind?.....
(new here? please read this before commenting)
Remember, this is a fan site.
Keanu Reeves is in no way connnected to this website.
Please do not make a comment thinking he will read it.
Comments are for discussion with other fans.
Thank you.