a force born of truth and love 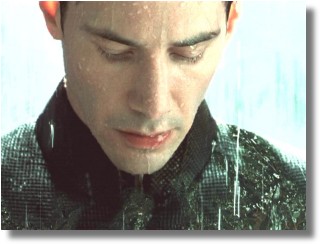 VIRGO (Aug. 23-Sept. 22): The Indian activist Gandhi lead many peaceful rebellions against oppressive governments, first in South Africa and later in British-controlled India. At first he called his strategy "passive resistance," but later disavowed that term because it had negative implications. He ultimately chose the Sanskrit word satyagraha, meaning "love force" or "truth force." "Truth ('satya') implies love," he said, "and firmness ('agraha') is a synonym for force. 'Satyagraha' is thus the force which is born of truth and love." According to my reading of the astrological omens, Virgo, satyagraha should be your word of power in the coming weeks. Your uprising against the forces of darkness has got to do more than say "no." A fierce, primal YES should be at the heart of your crusade.

Yeah Joanna...it does sound like both. It was the reason I noticed.

Keanu is Neo...he wakes up feeling like him half the time...

And of course, any chance to see those gorgeous pics is worth taking! thanks, krix!

sigh that is such a great picture... I don't know what it is, maybe it's his face close up, maybe it's the fact that he's wet... hmmm

"Truth implies love" ... what a concept.

What is it about the words "fierce" and "primal" underneath a picture of his face that that makes me feel so... fierce and primal? Hm? Hm. ... Hm!

Cornflakes, I do think it does have something to do with the fact he is wet. Two words, Break Point.

Allison, how 'bout Point Break? :) He was wet in that one too!

Oh that's what I meant. See kids, that's what happens when you listen to "Big Poppa" when you are trying to post something.

I have to say it again--I love the caption "A Force Born of Truth and Love" with that picture!

I smile everytime I check keanuvision and see it. Of course, it's a 'teary' smile...

Posted by: bakednudel on April 11, 2004 05:00 AM
What's on your mind?.....
(new here? please read this before commenting)
Remember, this is a fan site.
Keanu Reeves is in no way connnected to this website.
Please do not make a comment thinking he will read it.
Comments are for discussion with other fans.
Thank you.