Yeah, I'm completely evil for PUNK'D-ing you all but oh man, was it worth it. I wish the web were interactive enough that I could see some of your faces.

The comment that filled me with the most glee?

Hee! Precisely the effect I was going for, along with that slight nagging in the back of your mind that maybe I really had gone off the deep end into Kelso-land.

The key to a good fool is to carry it on way longer than needed.

Thanks to everyone, especially Red at AKN and the real Kutcher fans for being good sports.

Here's a little something to cleanse your palate with. 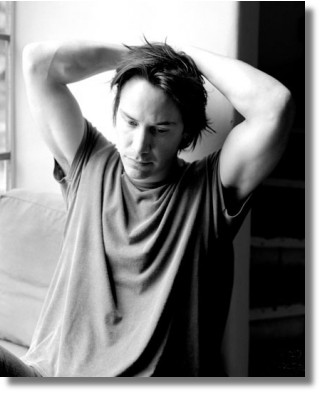 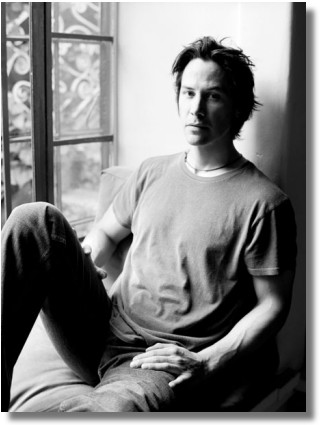 Aww... Ashton isn't that bad, is he? *LOL* But I can see where y'all are coming from - I have this love/hate sort of thing with him - y'know, one of those unexplainable things. Ah, well, anyway, Keanu's nice on the eyes, too, so it's all good. Great site you have here. :)

"Nice"? More like "hot chocolate covered pancakes" or "unbelievably close-to-immoral bundle of unbearable sexuality" on the eyes for me! ;D

(hum I really have to bake those pancakes and get over it.)

Back to KCR, finally! Thank you so much!!
And the bw pics are so soothing on my eyes!!!

I must admit I hated you for a moment yesterday, cos I didn't understand what was going on. Yeah, I was punked indeed. Welcome back, Ke. But at least Kutcher has a nice bod.

Thanks for the palate-cleanser too! yummy!

Ya got us good Krix!

I just HAD to check out the site before I went to work to make sure everything was back to "normal!"

I am going to have a really wonderful day now.

The stars have all realigned themselves in thier rightful orbits in my universse.

*clicks on keanuvision.com - holds breath - peeks through one squinted eye - cringes in anticipation*

Good one krix. Nice job. Really. Could you go a little easier on us next year?

Yea! Everything is back as it should be. Thank heavens April Fools Day only comes once a year! LOL

Ive got a meeting this morning, but I just had to stop in and see...did she put him back yet?

*washes down sorbet with morning coffee*

Thanks for coming back around. As much as it was a funny ha ha joke, all I can ever think when I see Kutcher is, dumbass. I wanted to gouge my eyes out.

Great prank, and boy, did you carry it off all day long like a champ! Fuuuneee! Though I am devoid of any opinion of Ashton, did yesterday seem like the longest day of the year to anyone else?!?

I missed him; he is sooooo totally The One!!

And that picture with his arms up over his head... oh...

you are forgiven, Krix.

I'm STILL snickering over it! :-D

And thanx to the Ashton fans for being so cool about it :-) *Some* must have visited this place through google or site-links... And I know that if someone had posted a 'being a Keanu-fan' thing as an april fools joke, some of us would have fumed about it. Really. Because we're touchy when he's being 'ridiculed' in our eyes ;-)
And I'm prety sure there would have been some 'bitching' ;-D

And of course there should be a 'thought' in that last sentence ;-)
Obviously I wasn't doing that when I clicked 'post' :-D

DUDE I WAS SO PUNK'D
I f'ing thought you lost it!!
Good one, Krix

Man am i relieved to have "the one" back. My only question is how will you top this years April Fools joke?

Mmmmmmmm keanu is so yummy indeed.

Man, you really got me, lol- the second i walked on to the site, I almost dropped dead! I felt sooo aloone and was like WHERE IS OUR KEANU?!?!?
that prank was so good it made me forget it was april 1rst. Lol, and i had been messin with people all day...
good job, kudos in decieving people

I love the ring in it... keanuuuu keaaaanu.... it's sorta stress relieving too

Damn! I miss all the fun. That's what I get for moving on April Fool's Day!

i actually clicked off my netscape the FIRST time i came to KEANUVISION yesterday..and thought..'WTF, i mustve clicked on the wrong link'....then i opened the site again, saw KUTCHER was still there...started to point my curser to the [x]AGAIN..and it was at THAT moment..my mind caught up with me !! GEEZUZ WOMAN !! hehe

i believe that i love you!

Krix, I really thought you had lost your mind. Wonderful april fool's, please dont do it again. I dont think I can take it. By the way the pic's of or MAN are awsome. Love you Ke xxxxx KEANU FOREVER.

Holy Cow! I've been gone a while and come back to catch up and I find Ashton K? WTF? I thought my computer had a VIRUS! Thank God 4/1 only comes along once a year. Most excellent punk, however.

Posted by: wallflower on April 6, 2004 06:23 AM
What's on your mind?.....
(new here? please read this before commenting)
Remember, this is a fan site.
Keanu Reeves is in no way connnected to this website.
Please do not make a comment thinking he will read it.
Comments are for discussion with other fans.
Thank you.