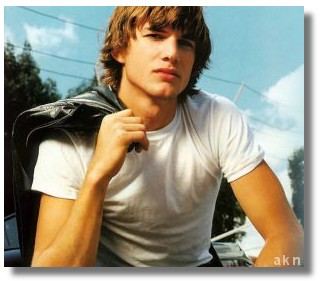 Christopher Ashton Kutcher was born on February 7th, 1978 in Cedar Rapids, Iowa. His twin brother, Michael, followed about five minutes later. Ashton also has an older sister, Tausha. His parents, Larry and Diane, divorced when Ashton was thirteen years old. It was around this same time that his brother had to undergo heart transplant surgery, which went smoothly. Still, the medical emergency impacted Ashton’s life, and he later enrolled in the University of Iowa, where he studied biochemical engineering in hopes of finding some way to help people with cardiomyopathy, the disorder his brother suffered from.
When Ashton was fifteen, his mother moved her family, along with her soon to be second-husband, to Homestead, Iowa - a relatively small farming community. While in high school, Ashton excelled at sports, but also developed a keen interest in theatre - making his debut in a 7th grade production of "The Crying Princess and the Golden Goose."

However, for the time being acting was only a hobby, and he was focused enough on his studies to gain entry into the University of Iowa’s biochemical engineering program. It was while studying at that institution that an agent discovered him in 1997. He was spotted at a restaurant and the agent suggested he enter a modeling contest called Fresh Faces of Iowa. Ashton ended up winning the competition, and earned himself a trip to New York to compete in an International Model and Talent Agency competition. He was quickly signed to an exclusive agency, and ended up traveling the world doing photo shoots and runway shows. Ashton landed some very good gigs, including Versace, and Calvin Klein.

In 1998, he decided to spread his wings some more and went on the audition circuit. One of the first shows he tried out for was That 70's Show , and he was lucky enough to get a very big early break.

Not one to rest on his laurels, Ashton took steps to make the jump to the big screen. He quickly landed roles in the teen romantic comedy, Down to You , the Ben Affleck action flick Reindeer Games and the modern western Texas Rangers , starring James Van Der Beek. Still young, Ashton has already managed to make an impact in the mediums of print, television and film. Clearly, he is one to watch.

dude. that is not funny.

hahaha, nice april 1st joke! very good! you had me there for five secs or so. now change back to Keanu!

oh my. inspired. you had me big time. nice work.

Happy April Fool's Day to you, too, Krix!
Just like the others, you had me there - for about a second!
I've already been looking forward to some kind of prank from you!!! Ashton, really!
Now I need to double my daily intake of Special K just to get that babyface out of my system...

Oh, I dread going into the high school today. All those hormone-driven little punks are going to be geared up and loaded for bear.

*wakes up* oooozzzhhhh...where am I? what day is it? OH. Yeah, you had me--except I thought your site had been hacked! (for a second or two)

Great job, krix! It's nice to laugh first thing in the morning...

Great April Fool's joke..first my rock station tried to get me with playing country for an hour, and now this catsatrophy LOL! .. Thanks Krix! :) Happy April Fool's day!!

Krix! What a horrid April Fool's prank! You are a genius!

The eyes really freeked me out until I read the entry and realized what was going on...

*wipes tea and cookie crumbs off desk and monitor*

Bwahahahahahaha! Thanks for the laugh, krix! Wonderful April Fool's joke!!!

That's a nice trick!! ;)
What a wake-up call, I thought you had been taken over for a second there too!
Happy April Fools Day everyone!

My eyes! My eyes!

OMG...im so'stupid....I thought it was for real! Am i happy it's not fjoew :) That's brilliant Krix!

OMG, I was ready to write a very angry e-mail to you, Krix, for betraying our LOVE!!! You really got me, really did!!! he-he-he-he!

what a great joke! your creativity never ceases to amaze!

OMG!!! I forgot what day it was, and was getting upset!!! It was like "What is going on!
Goodone Krix

Real funny Kris! You got me for a second.

I had to double check the address--and then
remembered it was april fools!

You will bring "The One" back tomorrow right?

What everybody else said! I was freaked out for a second. My brain froze and I was in disbelief. Then a thought...ooooohhhhh yeah today...aaaaahhh I got it. Very very good. I haven't been gotten in a really long time. Enjoyed that muchly! Thanks for the laugh. By the way can't wait to have Keanu back up there. Miss him already. :)

*shock and surprise...(spitting noise)...spits morning coffee all over desk and computer*

OMG! Krix...are you trying to kill me???!!! You know I cant take that much Ashton Kutcher early in the morning on a weekday...or any other day for that matter!

...now kindly return us to our regularly scheduled programming :-)

Jesus...don't do that...I almost shit my pants...Good one though krix. WE WANT KEANU!!! April 1st SUCKS!

I am really slow. First I thought, krix likes Ashton? Then I thought, it has to be a joke. Then, and only after reading a few of the comments, I realized what day it was. D'uh... *Zenny smacks her own head*

It was funny, but may we please have Keanu back now?
Really.
I mean it.
Where did you put him?
Put. Him. Back.
Now!!!!

LMAO! I just had to stop in to see what everyone's reaction was. LOL.

The whole "Ashton has two webbed toes on his left foot, the second and third toe ["OMG! Me too!"--krix]" is what I'm still cackling over... you are such a hoot!

Not too many crossover Ashton / Keanu fans, heh? I'm almost one of a kind. Ha.

Even my dog growled at the picture when it came up. Bad girl, Krix, bad...but really funny!

EEK!
I too need an Ashton blocker..

Ok, I'm over it now. Change it back before it freezes this way.

Well, I'm gullible too. I didn't get it until I read the comments. (duh!) Good one, Krix! You've got to double-dose us with Keanu, now!

I forgot it was april 1st. Good one Krix. I really thought you had lost the plot. I dont want a little boy, with no brain. I need a man, THE MAN. No one else will do it for me. I'm totaly monogamus. KEANU FOREVER. Please don't do it again. I dont think I could take the shock.

OH MY! You've outdone yourself. Take a bow.

This is a sure sign of the coming apocolypse. Please, pretty please, could we all just have Keanu back?

Man, good one Krix! After I got over the intial shock, I relized what day it was. Now could we PLEASEEEEEEEEE have Keanu back? I hope this means tommorow we will get an extra dose of Keanu.

Posted by: Allison on April 1, 2004 05:41 PM
What's on your mind?.....
(new here? please read this before commenting)
Remember, this is a fan site.
Keanu Reeves is in no way connnected to this website.
Please do not make a comment thinking he will read it.
Comments are for discussion with other fans.
Thank you.