I didn't know that brownies grew in rainforests 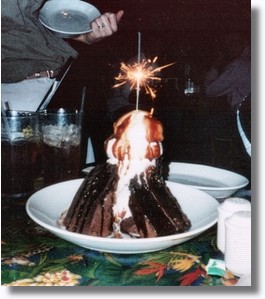 Krix,I think you might need more cold medicine. *LOL* Also Catz, You sound so young & Your son sounded so cute. I hope the rest of your night Rawks!

krix: Hey! It's me. We're... *explosion of coughing* We're here at the Rainforest Cafe with Catz and her boy, and I'm gonna put her on the audblog. Say hi to everyone!

catz: Hey, what's up everybody? It's me, Catz, and *cough* here's my son Jonathan. (Jonathan says "Hi") And we're having a blast with krix who is sick, but she's weathered it to come and eat dinner with us at the Rainforest Cafe. OK, guys, love ya and be good out there!

krix: OK, so service here sucks by the way, (background laughter) but there's something here called a Fudge Brownie Volcano that's (reads from menu): "erupting with caramel vanilla ice cream and hot fudge." So we might very well be ziggie piggies later on this evening. (Catz suggests a photo) No we will not have photographs! (Catz says of that dessert, not us) *much laughter* We're gonna debate about the photographs. *huge coughing attack* Ack! I'm dying here. Hope everyone has a good Friday night. Rawk on! Bye bye.

Thanks nudel for the transcription. I made one correction and added a link for context :)

Although service was pretty slow I have to say the food was really really good.
I recommend the Rasta Pasta.

Love the bear...would like to fondle LOL! Rainforest Cafe yummy!

Hey Catz! Nice to finally hear your voice [thanks krix!].

Sounds like y'all had a ball and I would lurve to see the 'ziggy piggy' pic..;)

That bear is so worth fondling too Shelz!!! We were both moaning so loudly while fondling the bears in the Rainforest Cafe giftshop I had to buy one for me and one for Krix... otherwise we would still be there feeling up the bears ;)
There will be a before and after pic of the "Ziggy Piggy Volcano" we all attempted to demolish..UGH My stomach is still full...I'll have to try the rasta pasta next time Krix...I can't remember the name of mine LMAO

Posted by: Julie! on March 1, 2004 03:09 PM
What's on your mind?.....
(new here? please read this before commenting)
Remember, this is a fan site.
Keanu Reeves is in no way connnected to this website.
Please do not make a comment thinking he will read it.
Comments are for discussion with other fans.
Thank you.