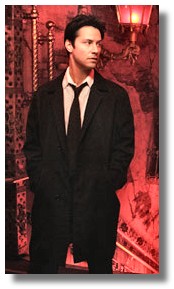 
"The holy shotgun? Yeah, there's a half-breed that kills a couple of the characters who are my friends so I'm seeking revenge. So, I put together this 'holy shotgun,' which again I think is kind of fun - 'killing with God.'" - Keanu Reeves on his brass, cross-shaped and Latin-inscribed weapon in Constantine

Those same set pictures are in the article and there's also a mouthwatering first look at Keanu as Constantine (shown) and the characters Midnite (Djimon Hounsou)and Chaz (Shia LeBouef) in a great picture that looks straight out of a comic.

There are some plot points discussed so spoiler warnings apply...

Read it all at CHUD.com.

(thanks to AleXXei at the forums)


"I think it's the whole idea of an anti-hero - this guy that sort of understands the world to place that normal people don't know exists. I think that he's sort of a supernatural, hard-boiled detective. He reminds me of the Sam Spade's and characters from the classic film noirs."

....and SciFi Wire has an article, 'Reeves Defends Constantine':


""We spoke about [the changes made to the character], but it seemed in terms of the platform that we were using, which became Los Angeles—the world in terms of heaven, hell and Los Angeles—seemed to be attractive and make sense. And we're kind of doing a hard-boiled kind of take on the piece. So we kind of went this way instead of a more gothic aspect."

"Hard-boiled" is apparently the new "raising the bar"....

Djimon Hounsou also talks to SciFi Wire and has this to say about Keanu...


Housou said that acting with Reeves has been exciting. "He's done so much, and this time on this picture, working with him firsthand, it's quite a nice surprise," he said. "I realize how actually he's a very talented man, and ... he's so anal about the work. The guy has received some criticism, good and bad, but working with him, you have a great affinity for the kind of generosity that he has with the work and with people that [are a] part of this picture. He definitely is a very simple man and somewhat maybe misunderstood, because he's just very reclusive, very private."

Lastly, here's a bit about the music that we can expect to hear in the trailer (thanks Netz).

I think that Garth, at Dark Horizons has got the whole thing covered. Hopefully that's the full and complete interview, from beginning to end. (via keanuweb)

*looks around nervously at work before typing* He IS perfect! Love the new Constantine photo. I can't wait!

This is going. to. rule.


Holy Shotgun.... that's funny and irreverent at the same time, like Momtny Python and the Holy Grail's Holy Hand Grenade.

"And St, Antilot raised the Holy Hand Grenade on high saying,"Oh Lord, bless this thy hand grenade, that with it thou may'st blow thine enemies to tiny bits in thy mercy."
"Lobbist thou Holy Grenade toward thy foe, who being naughty in my sight shall snuff it."

...sometimes I wish we could fast-forward in time!
This thing will rock muchly and the new pic's perfect \m/

Rhonda, now I'm going to have to watch Holy Grail again. Thanks for the laugh.

Wonder if Constantine has to deal with any killer bunnies?

"what's your favorite colour?"
"Green! No blue!"
I LOVE Monty Python and the Holy grail.

I love that picture of the three of them. I might have to take it all back about PG-13 and Shia. If that is indicative of the style of the film...

Oh, that pic is just perfect! Too bad I'll have to wait a lot to see Constantine ("Constanteen" as Keanu says it) coz it will take sometime to come to Brazil.

I believe in flogging a dead equus...

"What is your name?"
"It is Arthur, King of the Britons."
"What is your quest?"
"I seek the Grail."
"What--is the airspeed velocity of an unladen swallow?"
"Which do you mean, an African or European Swallow?"
"I don't know that--AAAAARRRRRRRGGGGHHH!"
"How do you know so much about swallows?"
"You have to know these things when you're king, you know."

"I'm afraid our life must seem very dull and quiet compared to yours. We are but eightscore young blondes, all between sixteen and nineteen-and-a-half, cut off in this castle, with no one to protect us. Oooh. It is a lonely life...bathing...dressing...undressing...making exciting underwear..."

Enough with the Python.
Mikey2...love ya, mean it, but I'm editing your comment because googlebot don't have any concept of context and I don't need that particular referral.

Posted by: krix on February 22, 2004 12:07 PM
What's on your mind?.....
(new here? please read this before commenting)
Remember, this is a fan site.
Keanu Reeves is in no way connnected to this website.
Please do not make a comment thinking he will read it.
Comments are for discussion with other fans.
Thank you.