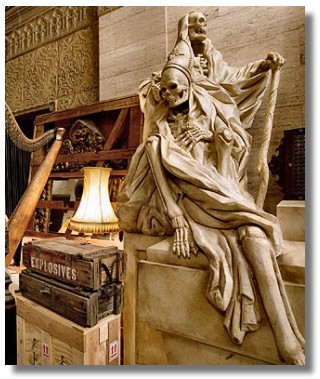 SuperHeroHype.com has a couple of pictures from the set of Constantine.

this is so scathingly cool... as is all the Constantine info.
An all-encompassing thanx, kri:)

Yeah, I love the skeletons. This film's gonna rawk!

...these set pics are so my cup of tea, I love these kinda things. I'm counting the hours til C-Day... but again the release over here is at least two weeks after the American release, maybe at the end of September...

I wonder when "Thumbsucker" is coming out. I'm needing fresh fodder to brood over.

Wow! More and more I´m digging the visual of that movie... seems it will be cool. I wish the movie rocks, because John Constantine is such a incredible character. And we know Keanu will be at his best... ;)

Loving the skeletons, wasn't too thrilled with this project but I'm quickly chainging my mind. Especially with the newest picture of Constantine, yummy!!

I wonder if the set designers will consider doing interior design?

Re the set designers doing interior design? I hope so; and, if so, maybe there'll be a Constantine interior design mention in Architectural Digest. They wrote a very interesting article about the SGG interiors (from Diane Keaton's perspective).

I've got a bit of info on Thumbsucker. No, sorry, I can't seem to find the source again. It was an interview with the Director, Mike Mills. He says he's trying to release it at Cannes, and then he's aiming for a 3rd quarter release. So I guess it's coming out the same time as Constantine.

Did somebody mention Cannes...

Posted by: Keanuette on February 21, 2004 06:11 AM
What's on your mind?.....
(new here? please read this before commenting)
Remember, this is a fan site.
Keanu Reeves is in no way connnected to this website.
Please do not make a comment thinking he will read it.
Comments are for discussion with other fans.
Thank you.