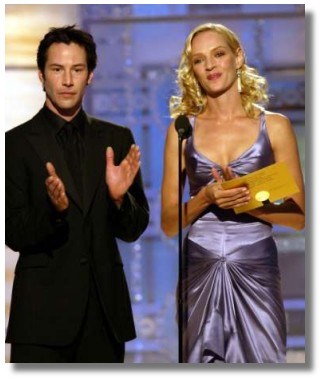 Yeah, well.....I forgot to set my VCR, but thanks to the magic of pictures and a lovely play-by-play by Jena in email it was almost like being there. Or at least like being in front of the TV.

From what I've seen he was breathtakingly dashing and charming as always.

Also ,Yay! for Keanu's Someting's Gotta Give co-star Diane Keaton on her Golden Globe for best actress/comedy and to Charlize Theron for her best actress GG for Monster.

And Yay! to 24 as well for best drama series.

I thought it was stupid that E! had all the pre-show coverage, but not the show itself...

We don't get NBC here - mongs!

Try to be a bit more considerate to us Brits, considering our boy Ricky walked away with the Best Comedic Actor gong - way to go Rick!

Best part of the show? Diane Keaton's reaction at seeing Keanu walking onstage. Yes, that man is Adonis. Didja notice her white coat was almost an exact replica of Neo's black coat? Too bad there isn't a pic of Keanu and Diane together from last night, him in all black and her in all white. That would be a striking picture.

Yes, Diane in the white Neo coat. I wonder if she realized. And her reaction was awesome. I think maybe she didn't know Keanu was there. Also, I loved how she named him in her speech, but said his name louder and more excitedly than she did the names of the other actors in the movie *Keeeaahnuuu Reeeeeeeves!!*

And of course, seeing Mr. Reeves was amazing as always. How handsome can one person be?

Also a note for those of you who have cable and want to watch the GGs again, they will be rebroadcast on Bravo on Saturday, Jan. 31 at 10:30 pm Eastern time.

Yes I totally noticed Keaton's Neo Coat and how she reacted to seeing Keanu walk on stage; she looked so surprised (perhaps at the fact that he looked really, really handsome and she was the last to have her character kiss his in a movie? Either way she seemed surprised at how he looked/carried himself/etc...)
Now I have to rewind the tape I recorded it on to see if he showed up at the pre-show on E! (I think he did right?) :D

I thought Keaton was shocked about Uma presenting with Keanu LMAO Figures my view would be off the beaten track.. Has anyone seen anything on that any where? Did he even go to any of the parties afterwards?

According to Access Hollywood, he skipped the parties and was one of several that snuck out the back door and took off. I did grabs and they are at the Clubs gallery. He's giving his PR lady a kiss goodbye before he gets into his limo. Also, out of the hundreds of party pics I saw today all over the web, not one of Keanu. Maybe he had to get up early today to work? ;)

Oh krix, by the way, the thing I liked the best about the awards, besides Keanu that is, was the interview with Kiefer Sutherland during the pre-show. I never noticed before what a sexy voice he has. *swoon* I'm beginning to see.

Over at Club Keanu, there are grabs from Access Hollywood. One of them shows Keanu leaving, holding a cloth or tissue up to his cheek. So maybe had some kind of dental work done and was in a lot of pain.

Maybe he was wiping off lipstick? ;)

i was talking to a girlfriend on the phone during the NBC pre-show, and it went like this:

oh, and whoo hoo on the 24 victory (finally!!). and Zen, what do you *mean* you just noticed Kiefer's sexy voice?! how is that possible? ;) didn't they all just look gloriously stunned to finally get the Globe, after three nominations?

I don't know how it happened lori. Plus, a few weeks ago, I finally decided to watch the first season of 24 on DVD (my husband's secretary loaned it to us, like months and months and months ago). I was home sick and watched ten episodes in a row. I'm at number 17 now. This is a REALLY good show. I had been told, but... WOW! Anyway, I did find him kind of scrumptious, but I still hadn't noticed the voice. Probably because of all the action and intrigue. I'm guessing. I'll pay attention from now on. *grin*

Posted by: Zen on January 27, 2004 04:31 AM
What's on your mind?.....
(new here? please read this before commenting)
Remember, this is a fan site.
Keanu Reeves is in no way connnected to this website.
Please do not make a comment thinking he will read it.
Comments are for discussion with other fans.
Thank you.