it's really easy to mistype 'martial arts' as 'marital arts' 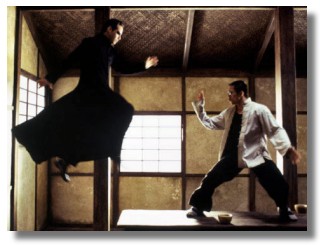 Thank you Ale, for this link to an interview with Collin Chou at kungfucinema.com where he speaks about Keanu's martial arts abilities...

"What was it like shooting with Keanu Reeves? That was a great fight you both had in the Tea House."

Collin Chou: Yuen wo-ping did a great job on the fights, along with his team. I was very impressed with Keanu Reeves' work attitude. He only trained for half a year to prepare for his part in the Matrix sequels. From watching the movies, you can see that he has attained such skills that are equal to many martial artist who have been training since childhood. You can imagine if Keanu had started his martial arts training when he was a child, his abilities would surpass many of the martial artists of today.

-Read the whole interview at KungFuCinema.com

Amen brutha! Respect to the one called Reeves baby...

I love the Tea House scene!! I could watch it over and over. It ends with the most delicious delivery of a line in the world! "You could've just asked..." Oh, yeah!

... when you watch the Tea House sequence in slo-mo, you can see that Collin helped Keanu along. I think it's great when you can rely on an experienced colleague and trust him.

It was my favorite scene--until I saw the Chateau fight, which is now my favorite fight/dance (because you know it is...) scene. Great interview! I'd love to see a film/anime about Seraph...hint, hint...

i'm with y'all on this one, the tea house fight is my alltime favorite matrix fight, it's so balletic. not to mention the two lovely men involved...

My favourite too. Like a dance. And the way the sounds of their steps fall in with the music is just hypnotic.

Oh, Keanu was great as well.

Posted by: Tabitha on January 22, 2004 10:58 PM
What's on your mind?.....
(new here? please read this before commenting)
Remember, this is a fan site.
Keanu Reeves is in no way connnected to this website.
Please do not make a comment thinking he will read it.
Comments are for discussion with other fans.
Thank you.