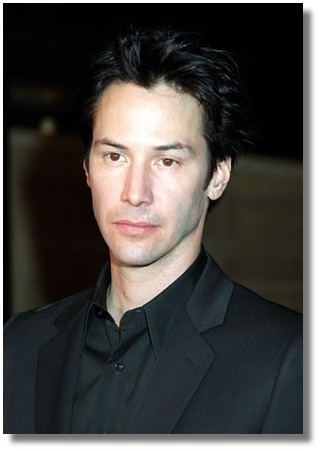 Thanks to POTD for this picture and link to a filmstew.com article on this new American in London project. Unsurprisingly, Erwin Stoff will also be producing.

The only other info I know on this project, that perhaps the character is a successful chef (?), comes from Lanfear in the comments of this entry (thank you again). I know that some people, myself included, thought he might be playing an actor but this is much more interesting. Maybe there's cooking scenes involved and who wouldn't want to see him in action in the kitchen? Besides, if he played an actor wouldn't it be just like Lost In Translation only without the need for the translating? Speaking of which, I still need to see that movie. Did you know that Keanu is thanked in the credits? I wonder if at some point he inspired Sofia Coppola with some anecdotes of his Suntory days?

Keanu is actually a small part of the storyline in LOT, hence the T-U from Sofia.

"who wouldn't want to see him in action in the kitchen?"

Yes, I would Krix, but "Cheffing" has NOTHING to do with it!

I knew I should have seen that movie ages ago. I think it's actually still in a theater here.

I guess saying "storyline" implies more than it is -he's mentioned by an actress who is playing an actress working with him on an action movie called "Midnight Velocity".

But back to the new project... it sounds like a turning point for him - selling the idea to a great screenwriter, etc. I hope Michael Kalesniko directs it too.

...all the smit shoveling that goes on here, I'll tell ya...

I'm excited about this one even moreso than Tripoli since it is based on one of his ideas. Yeah, a chef is good. I think he has really cool comedic skills as well. The film is already one I would buy and it isn't even written yet!

Doesn't England have the NAKED CHEF? :) Seriously though, I LIVED that experience - an American living and working in London. I've got TONS of stories and insight. I wonder how I could get to be a script consultant. *cheesy grin*

Well, in LIT I kinda thought the fact that they mention Keanu was in jest and to me poked fin at him--it was a mention from a press conference a ditzy actress was doing for a movie she was in "with Keanu" that especially because of her character made me think it made fun of Keanu's career and movie choices.
Also on the subject of LIT, I foudn as a movie it wasn't bad but it showed a very poor perspective of the Japanese people/Japan. I am from the East Coast and have been to Japan twice and have loved it and found that every stereotype they used was overegagerrated or wrong. (They all want to help and most know English, not to mention almost all of the signs in Tokyo hahve English and Japanese.) If I had never been there before and seent he film I may not ever really want to go to Japan...Coppola made the country seem American-Unfriendly. (Though it was clever of her to base it on a US actor making a whiskey commercial...)

Oh! Honey-glazed Keanu! With a dash of maple-syrup & a chocolate-sprinkling on top! *YUM!* Reeves a la mode! *slurp*

But, poor Krix! :-(
For your sake, I hope he'll play an American chef who gets into a cultural clash because he tries to serve us *old world* people Atkins-safe meals... That way you can double-drool too! :-)

Yeah, we'd all like to see Keanu cook something up in the kitchen... A short anecdote about differences between Yanks and Brits. Back in the dark ages when I was in college, my roommate and I lived with an English couple and their 3 kids for one semester. Had a blast. The oldest daughter Lucy who was about 10 was doing her homework one night and asked her mother for a rubber. I about spit (smit?) out my Earl Grey. RUBBER?!?! Yeah rubber, a friggin' eraser. I had never heard that word used for eraser before.

In my real life adventures I followed Keanu into the kitchen. He was in his black pajama bottoms, but he was talking to another girl in the kitchen. I didn't say a word. We just nodded. Yeah, he looked nice in the kitchen.

Julie! you really are putting maple syrup on everything now, aren't you? Hee!

I really want to see this movie. And Lost in Translation too. I love Bill Murray.

Wow, I wonder how many of us have London connections? I worked there for 9 years, can I be a consultant too? *waves hand in the air*

I lurve the chef idea...I guess we'll have to see. I'm also much more psyched about this than Tripoli. I'm sure it could be great, but I'd love to see Keanu in more light comedies, well-written stuff. Historicals? not so much...although...hey you can bring that well-turned leg in stockings and knee-trousers in to my boudoir anytime!

Thanks to all for sharing the love! *ok, I got a little sentimental there...*

I'm waiting to rent Lost in Translation since it's not in the cinemas here any more.

Actually I'm still not sure if a chef film means exactly that: a film involving a chef.

KR: I'm trying to. I have some ideas. I want to do an American in London, kind of a chef film. I have an idea for that, and I have a couple of other ideas so I'm trying to find writers and producers and things like that.

So you see, I'm wondering if a chef film is a lingo in the industry for something else....like film noir :) Though I think him getting famous as some sort of naked chef is a good idea too!

In that same interview, he mentions something very revealing too, and very real.

SO, AFTER LIVING IN HOTELS FOR SO MANY YEARS, WHAT'S IT LIKE LIVING IN A HOUSE?
KR: You know, it was weird. I started Constantine and for the first two weeks, I wanted to check back into a hotel. I wasn't used to working in my home. I was like, you know, how do I eat? What do I do?

As for Lost in Translation, lovely movie. Sofia did use a lot of his experiences in the Suntory shoot. Though her father was once involved in getting Akira Kurosawa a Suntory shoot as well. And the reference Anna Faris (the co-star actress in Midlight Velocity) made to him was certainly in jest: "Keanu dies in this movie, but I believe in reincarnation. What's it like working with Keanu Reeves? We share so many things - we have 2 dogs, we both live in LA, we both like Mexican food."

It was hilarious. I think Sofia meant for it to be some sort of tribute. BTW, this is not gossip, because it's publicly out in the open in 1992. He went on interview record with it. Sofia is one of the very few women he has actually ever acknowledged having a relationship with. If I do find that ancient interview again, I'll post it.

How do I eat?!? OMG, that boy is just too funny. If necessary, I will quit my job, move cross country and spoon feed him. Yeah, sounds like a plan!

Do you think maybe Keanu meant chef d'oeuvre (as maybe some kind of shorthand?). You know how self-deprecating he is sometimes. This is what the online dictionary had to say about chef d'oeuvre...

Though I'm not complaining about a movie with Keanu in a kitchen. ;) I wonder if he does *any* cooking? He always seems to eat out. Wait, he did work at a pasta restaurant, so that's probably a specialty. And he did mention a looong time ago about his favorite sandwich: Ham, cheese, tomato on German Black Bread. Man, now I'm hungry. LOL

I second Melissa's LOL @ Cracker Jjaks! Good one Smit too!

Say, this is rather a funny mix-up. He might not be talking about "chef" in the way we understand it at all... and he doesn't know how to feed himself to boot. Poor fellow, for the last 20 years he's been living on room service and pizza, I bet. What a little gypsy he is. I wonder if he knows how to cook at all?

I mean, I can scramble the occasional egg and have one decent casserole recipe but that's about it. I don't suppose I could take very good care of him. Not that I wouldn't be willing to give it a shot. For this man, I'd cut the crusts off the peanut butter and jelly sandwiches.

English is not my native language, but my first thought upon reading it was that it must have meant 'chief'-movie, as in 'the most important' one.

However, I liked the chef-idea so much I got carried away with the thought ;-) *drool*

I really like it that he's 'expanding' his world. I remember reading an interview once in which he stated that he was just a 'cog in the wheel' & had no intention of doing behind the scenes work whatsoever. The fact that he does now, shows that he has grown & is more comfortable with what he has achieved as an actor :-)

On a different note, yes Zenny-sweety, my maple syrup stock IS running low... *eek*! :-)
So far I've put it over pancakes, ice-cream, in a little tartlet & gulped it down 'pure' once ;-D
My culinary life had *no* meaning untill you send it to me :-)

Posted by: Julie! on January 21, 2004 07:32 AM
What's on your mind?.....
(new here? please read this before commenting)
Remember, this is a fan site.
Keanu Reeves is in no way connnected to this website.
Please do not make a comment thinking he will read it.
Comments are for discussion with other fans.
Thank you.