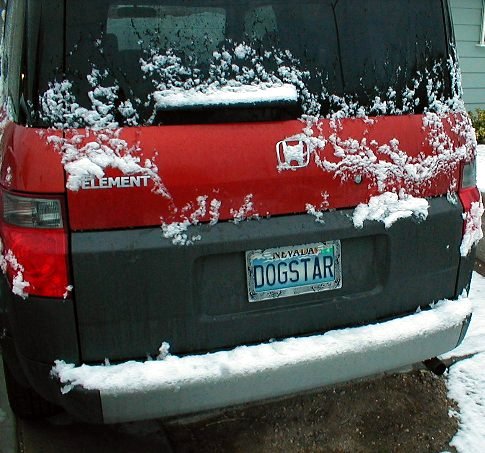 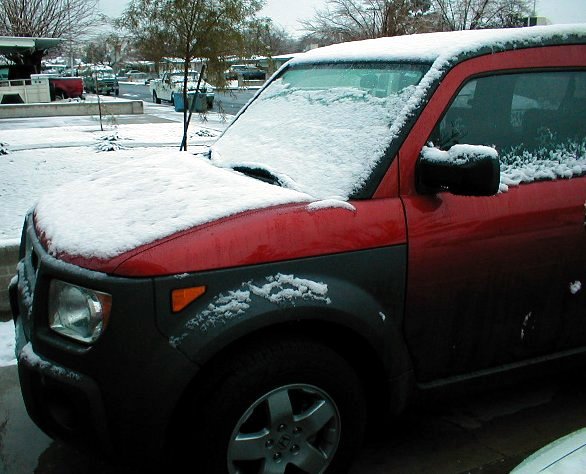 Humphrey is freaking out.

I know it looks paltry, but we haven't had snow that stuck to the ground in YEARS. It will be gone by noon....

Did you get a chance to make a snow angel (or would it have been more like a "slush" angel?)? Love snow, just not ice. Were the driving conditions okay? Wouldn't want you to hurt your new Element!

that wagon looks red in the pics, but i know it's really orange, right? ah, who cares, it has SNOW on it! most non-heinous...

Hmmm...maybe California is next? :) Just kidding.
Krix, just wanted to wish you a happenin' and hoppin' Keanu 2004. Keep up the wonderful work that you do and share. 2004 cheers to your readers as well.

Wow! I heard on the radio that it had snowed in Vegas, but now I've seen pictures to back that up! Poor Humphrey! Take good care of him and yourself for that matter. As you said, it will probably be gone soon!

*darkly* it's all a sign of the End Times, you know...that, and the fact that Revolutions didn't get an FX Oscar nomination...

seriously, enjoy the snow!! It looks like fun. Maybe Humphrey will learn to like it? Murphy does, but he's a dog of course.

Hee! krix, welcome to my winters. Well, a teeny bit of it anyway. :)

Send it my way. I'm Canadian, and I've missed it ever since I moved here (Maryland). That "blizzard" earlier this year was nice, though. :)

Mikey2 is Canadian! Woo hoo! One of us. *smiles* Where from?

Well you're doing way better than over here. The snow has been a no show - again...

Don't like it so much so I don't miss it.

I'd laugh, but that would be bad Karma! I don't want snow here in NC! We have had some really warm weather for December in the high 50's and mid 60's. Sorry about the snow in Vegas!

ARRGGG!! krix do me a favor and blow real hard, maybe it'll get to us here in Beantown MA i miss it like hell. Enjoy it you lucky duck!!

What weird glitches in the weather. Out here in PA where I live, it has been very nice in the mid-50s for the past few days. Maybe Keanu is just making me too *hot* and I have suddenly started my own high pressure system, thereby diverting all *winter* weather out west...

you guys were all over the news today in L.A. the big storm never hit us even though we were on STORM WATCH 2003 *in big announcer voice*

"krix do me a favor and blow real hard"

Well the snow is LONG gone. It was a fun little novelty, but I don't think I could take a lot of it on a regular basis.
I wore my Roots toque all day Zen!
You Canucks can make a spiffy hat.
:)

OK, now I have coffee all over my monitor and keyboard..*grin* krix, yet again you start my day with a smile, or perhaps in this case a leer...

We make even better jackets krix. My little brother came home for Christmas from Calgary and he was wearing one of those red Roots college jackets the Canadian athletes wore at the Salt Lake City Olympics. They were a limited edition, so they're not sold anymore. I tried to swipe it the whole time he was here, with no luck. But man they're cool.

OK...once again, I can't stand to not know the meaning of a word, so TOQUE is my word of the day. I don't think that's a word regularly used in the South! I had to research it, but I can't find a good illustration, so am I correct in assuming it's like a toboggan cap or is it like a beret?

Oh, and Zen: I agree. Those Canadian Olympic jackets were the coolest!

Oops, I meant I *KNOW* what a toke is. Nancy Reagan must've been infiltrating my subconscious with an old 'Just Say No' campaign snippet. Eek.

Yeah, r.j. And you know, they only call them "toboggans" in the deep south. I grew up in Florida and they called them ski caps, or woolly caps.

Not that I ever had, or needed, one.

Thanks, nudel! So, by me calling them "toboggans" you knew where I'm from anyway (even without my "South" comment)? Hee.

You guys are nuts! A toboggan is something you sled down a hill on!

Someone get me a pop, will ya?

You should've seen the look on a Dr. Pepper delivery man's face when I told him I would show him where the COKE machine was. Pure evil!

Posted by: r.j.girl on December 31, 2003 11:55 AM
What's on your mind?.....
(new here? please read this before commenting)
Remember, this is a fan site.
Keanu Reeves is in no way connnected to this website.
Please do not make a comment thinking he will read it.
Comments are for discussion with other fans.
Thank you.