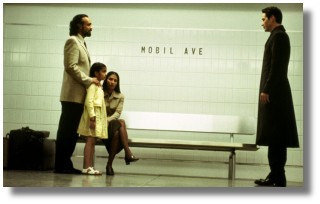 MovieMistakes.com already has over twenty mistakes spotted in Revolutions.

From the 'quite nitpicky, actually':


"In the rain battle scene, where Neo is laying on the soaked ground after crashing into the road, Neo's ear is filled with water, in the next shot, the water is gone. Neo's head hasn't moved between the two shots."

To the 'well, this is sort of important':


"In the train station, the Indian program explains to Neo that he cannot come with his daughter because it is his karma to keep doing his job as a program. In both Hinduism and Buddhism (it is not definite which religion he is) karma is the overall value of one's spirit, or soul. The concept that he was speaking of was dharma, which is the duty that a soul is obligated to perform."

Reloaded has a count so far of 80 mistakes spotted, and The Matrix? 112.

Also Matrix related, this entry has taken on a life of its own as a idea exchange for cracking the new 128-bit code over at the official site.

Which is just so cool I can hardly stand it. You rock on hax0r boys!

This one is cool. I'm not sure it's a mistake, though.

Revealing: Multiple Smiths enter Oracle's kitchen, but only one has a shadow.

Although it is true that Dharma is like Cosmic Order of things, or a dutiful observance, Karma is more the totality of a person's actions, such a cause and effect; i.e. fate or destiny. So when Rama Kandra speaks of Karma, perhaps he means it is his fate or destiny. I adore how he says, "Karma is a word like Love, a way of saying what I'm here to do."

I used to pick stuff apart like this until I realized I was missing the joy in seeing a film looking for "mistakes." Some are blatant in a few movies - clothing completely different, etc.; in that case the continuity person needs a flogging.

Hey, sweet baboo's earholes go somewhere, right? Maybe the water went inside his ear canal? DUH? Hello? or do you guys at "moviemistakes" have water in your ears?

HAHAHA! You *know* that you don't have a life when you study the water-level in one's ears, LOL!!!!

And ohmygoodness, *snork*, you've turned into a hacker-platform! ;-D I hope they won't keep you awake at night with the sound of *munching on crisps and opening soft-drink cans*. And they'd better clean up afterwards ;-)

It's cool that you're becoming an internationally recogniced 'hostess for hacker-dudes' tough ;-)

When I looked at the Matrix, I saw strange stuff that didn't fit and I was like "What the..?" but the action is so fast-paced that I'd forgotten about it by the next frame.

This is weird because the first two times I saw Revolutions (in English, but in Germany) I was sure they *did* say Dharma.

When I saw it in the UK, they clearly said Karma.

So my friends on matrixcommunity.org said I obviously was drunk (hee) because clearly the word was karma.

And those nitpicks? Why, Mr. Anderson? I just can't see that kind of thing...

I am usually way too into the movie as well. The only one I noticed in the first film was the "phantom hand" and that was only becuase someone told me about it.

And I'm glad to know that the whole karma/dharma thing is probably not really a mistake.
They're just words, right?

Damn, and the only thing that I kept looking for in the first movie was the "brief male nudity" that one site had as warning for parents...

god, how i loved that Rama guy -- he exuded sweetness, didn't he? as did his daughter. and he gave Neo his first epiphany of Revolutions...

what's with these people, already watching the movie searching for mistakes? i might start naturally picking up on the mistakes, but only after about 25 viewings (at least that's how long it took me with TM). my ex used to do that to every movie we saw, right from the start. maybe that's why i'm having such a violent reaction to these MovieMistakes guys. get over it already, and just feel the damn *love*!

No, I imagine if he were laying on the ground krixy would have been jealous... ;)
*runs*

hahax.. it dusn't matter.... pple onli watch the show coz they tink itx nice.. if not itx bcox of the pple acting in it..

hahax.. it dusn't matter.... pple onli watch the show coz they tink itx nice.. if not itx bcox of the pple acting in it..

This isn't a mistake - but something cool that a friend of mine emailed me about - "So, I was showing a student here some features of Panther, and the new features in the DVD player, so we popped in Matrix Reloaded to watch a few scenes. We went to the section with the Merovingian, and imagine our surprise with what we saw...
** SPOILERS ** Remember in Revolutions when Neo is in the Train station, and he meets the Indian family, and has a long conversation with the man? The man says he had met with the Merovingian and made a deal with him. We don't see that exchange...or do we?

Okay, now put in your Reloaded DVD. Go to the scene with Neo, Morpheus, and Trinity walking into the Merovingian's restaurant. As they walk in, the camera pans to the left as one of the guards is escorting someone out. Look closely, its the Indian man from the train station. We were watching the scene today, and that happened, and we were like "Whoa! Did that just happen?""

I guess you porbably know about that already, but it makes me want to go watch reloaded again and see what other stuff I've missed...

Nukea, somtehing tells me that when the third DVD comes out, people will be watching and rewatching, pausing and fast-forwarding until their DVD players implode. I can't wait~ ;)

Posted by: Chianti on November 13, 2003 10:17 AM
What's on your mind?.....
(new here? please read this before commenting)
Remember, this is a fan site.
Keanu Reeves is in no way connnected to this website.
Please do not make a comment thinking he will read it.
Comments are for discussion with other fans.
Thank you.