Or rather: No Details, SciFi.

When you walk into a store with the purpose of buying a magazine with Keanu on the cover, it's a shame to leave empty-handed even if your intended periodical is not there.
So when I saw December's issue of SciFi magazine at Smith's this morning, I went ahead and grabbed it. 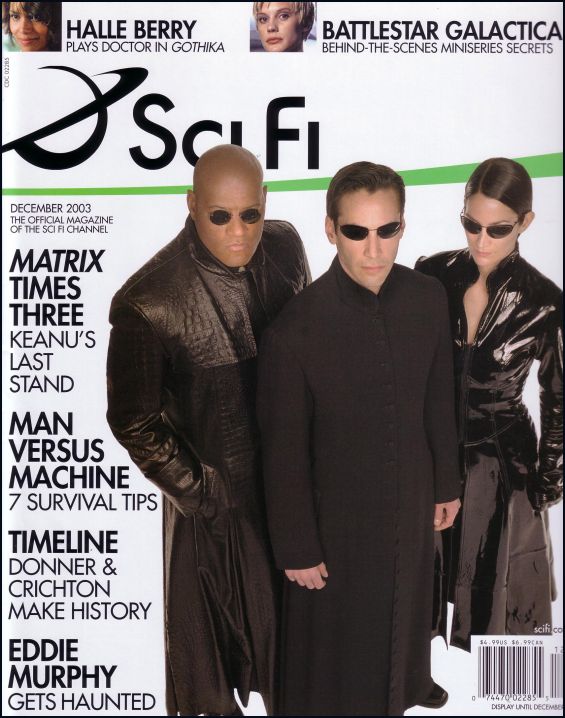 Lip-scar fetishists will notice that the picture is actually a mirrored perspective. I hate when they do that. I'll be flipping it back if I edit this one for future use.

This picture of a thoughtful One starts the article which you can read here..... 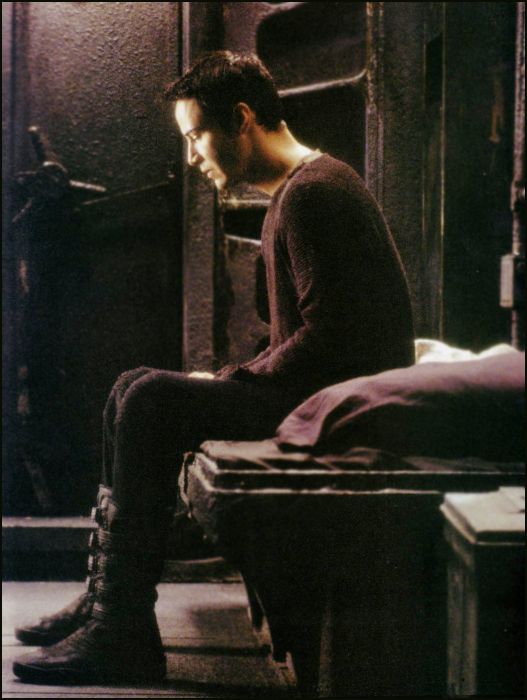 There's this fluffy bit on past keanu characters along with the article and there's a few other pictures, most of them non-spoilery, including a really nice close-up of Neo and Trinity that might be November's calendar.

krix! I just got back from the store with the same purpose as you, and ended up finding the same thing! The flopped pic made me decide NOT to buy it though. You'd think they'd notice that. And on the cover too. *seesh*

I did get the Canadian Flare. I flipped through it quickly and what I read from the article was very interesting.

Zenny, you tease! What did you read in the Flare? or is it too spoilery...you know krix (& I) want to go into this thing as virginal as possible ;)

As for the flipped picture: I actually flipped the pic of John Constantine sitting at the table, because it showed him with the ciggie in his right hand (I didn't think to look for the scar) and darned if I didn't think it looked better in every way, horizontally flipped. Unfortunately, a study of the clock in the background has convinced me that it is the right-way-round in the original.

oh and I lurve that sad thoughtful Neo picture. Poignant. *sigh* I have very bad feelings about the end of Revolutions...

Ooooooh....me, too, nudel! I have been avoiding everything spoilery, as well. I'm not expecting a Disney ending, that's for sure, but I just hope the primaries are all alive and kicking at the end of it all. **fingers crossed**

2 bookstores and 3 grocery stores later...no details. feh. :-/ Guess I'll have to wait until Monday or Tuesday. Damn it.

Man, I love that I can go to a place (albeit a cyber one) and bemoan the fact that there is no NEW Details on the magazine stands yet. Sniff. Sniff. You ladies feel my pain. It's great! :O)

And Zen, I don't think you want the cyber-rep for being a tease. Or do you? ;O) Share pretty please with a cherry on top (unless it's spoilery and we'll avoid it like a Charlie Sheen movie). Thanks!:O)

Honestly everyone, I had no idea I was going to cause a stir when I wrote that! I thought you'd go out and buy it! There is no spoilery in the article, I'm avoiding all of that too. If I had a scanner, I'd send the article to krix, but I don't.

In a nutshell, the writer talks about how there are two viewpoints on who Keanu is. One insists that he is painfully shy and highly intelligent to the point of genius. He's a well read individual who devours anything and everthing of an educational nature. Camp two believes him to be one of the luckiest SOBs ever to hit Hollywood and that the only reason he plays his parts so well is that he's an empty vessel who wouldn't know what to do unless it were laid out before him like Hansel and Gretel's breadcrumb trail. What the two camps agree on is that he is a handsome and well-mannered man who has a reputation for being agreeable with the production crews on every film, shows a genuine interest in their work and is very generous.

The writer personally thinks he could be either extremely complex or it may be that, if he finds someone is not up to his level of awareness, he just doesn't want to waste his time - or theirs.

It goes on from there with a Q and A with Ke, most of which hasn't been asked or stated before, and ending with very interesting comments from him concerning world affairs.

I realize I may come off as even more of a tease after you read this. I'm more than willing to type more if you want it, I just don't want to use up all this space if krix minds. This is already, probably the longest comment posted. Ever!

As if I needed to write MORE! Concerning the flopped pics, I always use his hairline as a guide. The peak points to the left when you're looking straight at him. Plus his nose looks off when the picture's flopped. Okay I'm done now. :)

...please don't hit me. *covers head with hands* I swear this is the last comment!

Dracula is on my yet-to-be-seen list (growing smaller by the day..) so I will look for it. My friends tell me that ambidextrous people sometimes are dyslexic; or perhaps that dyslexic people are ambidextrous, I don't know. I personally think anyone who can memorize a play's worth of Shakespeare is a hell of a lot smarter than I'll ever be, college education or no..

Zen, I don't think we get Flare waaaaay down here where I am. Sounds like Details will have a way to go to live up to the Flare interview!

dude, maybe it's just me, but i can't get the popup image to work (keanu's other characters???). yikes! nothing but a big black box...

Awwww Zen, I didn't mean to put you on the hot seat! I thought Flare is/was a Canadian magazine, no? So, I didn't think I'd get the chance to buy it (being in Southern Calif. and all). But thank you ever so much for typing out what you did!! I really appreciate it! :O) Some interesting ideas there.

Natasha, *giggles* don't worry about it! It is a Canadian magazine, but we get EVERYTHING American here, so I just figured you got our humble-little-works-of-art over there! :)

glad I found a copy of this mag. Now to just make a color copy of Kanu pic above. Definitely a keeper!

Posted by: phoenix IX on October 19, 2003 08:33 PM
What's on your mind?.....
(new here? please read this before commenting)
Remember, this is a fan site.
Keanu Reeves is in no way connnected to this website.
Please do not make a comment thinking he will read it.
Comments are for discussion with other fans.
Thank you.