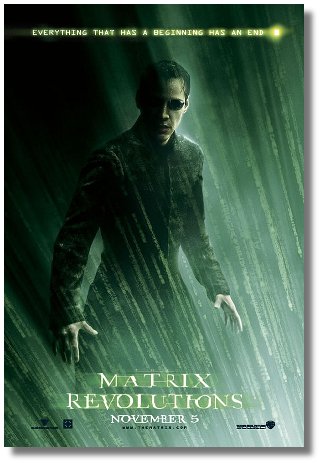 WARNER BROS. PICTURES AND VILLAGE ROADSHOW PICTURES
TO MAKE CINEMA HISTORY
WITH GLOBAL UNVEILING OF THE MATRIX REVOLUTIONS ON NOVEMBER 5,
MAKING THE FILM AVAILABLE TO FANS AROUND THE WORLD
AT THE SAME MOMENT IN TIME

Through IMAX Digital Re-Mastering Technology, Highly Anticipated Film Will Also
Debut in IMAX® Theatres in the U.S. on November 5, Marking the First Time a
Major Live Action Movie is Released Concurrently in 35MM and IMAX’s Format


Warner Bros. Pictures and Village Roadshow Pictures will unveil THE MATRIX REVOLUTIONS, the final explosive chapter in the blockbuster MATRIX trilogy, at the exact same moment in time in every major city around the world on November 5. This unprecedented distribution scenario will make the highly anticipated film available to fans simultaneously at 6 a.m. in Los Angeles, 9 a.m. in New York, 2 p.m. in London, 5 p.m. in Moscow, 11 p.m. in Tokyo and at corresponding times in over 50 additional countries worldwide. The announcement was made today by Dan Fellman, President of Domestic Distribution, Warner Bros. Pictures, and Veronika Kwan-Rubinek, President of International Distribution, Warner Bros. Pictures.

"Given the enormous popularity and success of the Matrix films throughout the international community, we’re thrilled that we can bring the final chapter of this amazing trilogy to fans simultaneously around the world," Kwan-Rubinek said. "We thank our exhibitors for their unqualified support in staging this extraordinary event."

"The zero hour simultaneous opening of REVOLUTIONS once again positions the Matrix films as the cutting edge experience in motion pictures," Fellman added. "Audiences came out to see THE MATRIX RELOADED in record numbers, and we appreciate the enthusiasm, collaboration and support of our exhibitors in helping us bring THE MATRIX REVOLUTIONS to audiences on November 5."

"We received such an overwhelming response to RELOADED from audiences around the globe that the Wachowski Brothers wanted to give our fans the chance to experience the final piece of the Matrix puzzle at the same time in every major city worldwide," said Joel Silver, producer of the phenomenal Matrix trilogy. "It's an incredibly complex and exciting venture that furthers the Wachowskis' vision and underscores the trilogy’s theme of integration."

To date, THE MATRIX RELOADED has earned over $734 million in worldwide box office, making it the highest-grossing film of 2003 and the highest-grossing R-rated film in history, both domestically and internationally. Additionally, RELOADED scored the record for the largest single week ever with $158.2 million and reached $150 million in a record-breaking six days domestically; internationally, it is the 10th highest grossing film of all-time, and is the first film in history to gross more than $100 million in a single weekend.


In conjunction with the REVOLUTIONS worldwide distribution event, THE MATRIX REVOLUTIONS: The IMAX Experience will debut at IMAX Theatres in the United States on November 5. This marks the first time a major Hollywood live-action event film is released concurrently in 35mm and IMAX’s revolutionary 15/70 format.

Like THE MATRIX RELOADED: The IMAX Experience, THE MATRIX REVOLUTIONS: The IMAX Experience has been digitally re-mastered into the unparalleled image and sound quality of The IMAX Experience® through revolutionary and proprietary IMAX® DMR™ (Digital Re-mastering) technology. IMAX Theatres offer unequalled clarity and intensity of image as audiences experience one of the biggest films of the year on screens up to eight stories tall and 120 feet wide, and surrounded by 12,000 watts of pure digital sound.

In THE MATRIX REVOLUTIONS, the final chapter in the MATRIX trilogy, the rebels' long quest for freedom culminates in an explosive battle. As the Machine Army wages devastation on Zion, its citizens mount an aggressive defense – but can they stave off the relentless swarm of Sentinels long enough for Neo to harness the full extent of his powers and end the war?

THE MATRIX REVOLUTIONS will be released worldwide on November 5 by Warner Bros. Pictures, a Warner Bros. Entertainment Company, and in select territories by Village Roadshow Pictures.

I used to call on both Dan Fellman and Veronika Kwan at WB. They've both moved up-up-up since then.

Unfortunately, I lost touch with them and they'd have no idea who I am now.

Tyler, you can download that poster from the official site. I printed it out at work on our nice color printer and it's above my desk as we speak. Fits very neatly on 8.5 x 11 paper. I'm hoping to buy a larger but not too large one eventually...

Thanks for the info baked.

I want mine life size :)

6AM Los Angeles time!!!! Whoa! I'm assuming that would be PST. Hmmmmmm....That's A LOT of excitement in the AM (seeing the Matrix Revolutions). I don't know, maybe I could do it, with the help of some caffeine (no Red Bulls though, I've learned from Krix) ;O)

It's NOT the red bull consumption, I swear. I drink them all the time.
It's the SARS, I just know it.
Damn skateboarders.

Okay, okay, I won't slander Red Bull anymore! (cross my heart) :O) I think if we break down your weekend we can pinpoint maybe *exactly* when/where you got contaminated... Let's see... Krix's weekend, the abridged version.

1. Arrives in San Diego at the hotel, (slight hairspary emergency for Tess). Loaded up on Red Bulls and caffeine. =Fine

2. Gets to the Belly Up Club. Good seats. Right by the stage. Keanu's side. Hairspray crisis averted. Adult beverages consumed. = Fine, but a bit loopy.

4. After a looooooonnnnnng wait, Keanu comes out on stage to show off his equipment. I mean, fix his equipment. (Much hyperventilating on the left hand side of the stage due to the wonderful view).=Fine (just a bit breathless) ;O)

5. P.A. dude says no pics are to be taken (slight wind taken out of Krix's sails, but overall she's okay due to previous glimpses of Mr. Reeves' assets)=Fine (and flying high at this point)

6. Becky comes out and rocks the house. Keanu comes over to Krix and co.'s side of the stage. Shakes hands. Smiles. Everyone is in a very good mood. Much happiness in that corner and on stage and in the audience. =Fine (and on top of the world at this point)

8. Gets to the beach. Sees seagulls and the ocean. Life is good. Life is beautiful. = Fine

9. See's Suburban Legend setting up. Get's remembered as the phone blog person. :O)=Fine at this point (Feeling about 18 again). :O)

10. Since I don't know what happened after Krix sees Suburban Legends at the Vans thingy or what she did Sunday night, I'm going to have to pinpoint and say somewhere between 12 PM Sunday and 12AM Monday, *that* is where Krix picked up her cold/virus (God, not SARS I hope!). I still think it was all the excitement and male beauty that Krix saw, but we can probably bicker about that 'til the cows come home. ;O) Okay, I know this is long, I was trying to be somewhat comical, but I think I failed. LOL Anyways, the point of all this is Krix had a GREAT weekend and now doesn't feel so good! Get better soon Krix!!! No more sucky okay?? :O) (And yes, I did listen to ALL your audio blogs. Can you tell? LOL)

Hee! That was a great and clever rundown, Natasha!
Thank you!

Maybe I'm suddenly allergic to Nevada.
Wouldn't THAT be a shame?

Hahaha, I can see your business-card:
"Natasha - Private investigator"! Are you wearing a trench-coat and a hat right now, too? ;-D

I have some evidence to solve 'the case of the creepy cough', also!!! It *must* have been some strange bacteria that you caught in Utah! You know, one of these little germs that have a long incubation-time. Or maybe it was just an overdose from all that unusually fresh air :-)

OR (but I'm starting to become paranoid now)... Maybe... The W.B. had something to do with it.
Think about it.
You're *fine* all the time, but the moment you publicly vent your dissapointment about being 'ignored' by Joel...
A mysterious disease creeps upon you... You don't notice it at first... But it's there. It invades your body slowly, but surely... Like a "virus", one might say... Causing your system to break down and secretly turning you into a little puddle of coughing jelly... *shiver*

Ha! Ha! Ha! @ Krix. Allergic to Nevada! Too funny! Yeah, it'd be a *real* shame if you had to move to like California or something? Closer to Joel ya know and other people. ;O)

Kudos to you and Julie for actually reading ALL of that! :OP

Julie, I wasn't stalking Krix I swear, I just listened *real* intently to what she was saying on her audio-blog (makes innocent face). I have some extra time today, can you tell? ;O)

:-) Natasha, I know *that* feeling over here ;-) So thanx for writing such a long & funny comment, it put a smile on my face and made my 'waiting-time' at work go faster :-D

To my frustration, I haven't been able to hear the audio-blogs :-(
But there's an 'elegant guardian angel' hanging around here that was sweet enough to let me know the 'Keanu-details' of it! :-)

Krix, what is the bad dogstar news that gets you sad and annoyed? I never ever go to message-boards or join 'groups', so I don't know which link to click to see! I used your 'dogstar-online' link but oh, *stupid me*! I should have remembered that *this* was the one that went down!!! There's not more bad news, is there?

click on the link in the "in my opinion" entry, Julie.

Natasha! So clever and funny! LOL! You must get extra time more often and entertain us!

Julie, how lucky of you to have an 'elegant guardian angel' to help you! I have one too! They are way cool and very hard to come by! ;)

krix! Feel better! You so don't deserve this. We have clever SARS doctors in Toronto here, let me know if it comes down to that and I'll have one sent to you! :o)

Posted by: Zen on September 30, 2003 04:19 PM
What's on your mind?.....
(new here? please read this before commenting)
Remember, this is a fan site.
Keanu Reeves is in no way connnected to this website.
Please do not make a comment thinking he will read it.
Comments are for discussion with other fans.
Thank you.