Ooo, this is much better than powerade... 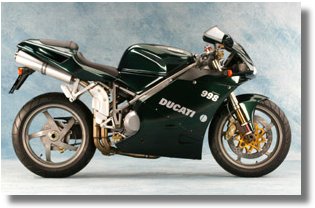 BOLOGNA, Italy--(BUSINESS WIRE)--Sept. 16, 2003--Ducati Motor Holding S.p.A. (NYSE:DMH)(Borsa Italiana S.p.A:DMH), a leading manufacturer of high performance motorcycles, today announced that it is teaming up with Warner Bros. Consumer Products to produce a limited edition Ducati 998 and Ducati Monster 620i.e., each inspired by "The Matrix Reloaded." The motorcycles will be on display at the Ducati stand at the Milano trade show, EICMA (September 16-21), and available for model year 2004 at Ducati Stores and other Ducati dealerships around the world.
Warner Bros. Pictures' and Village Roadshow Pictures' action blockbuster "The Matrix Reloaded" is the second chapter in the Wachowski Brothers' revolutionary film trilogy. The worldwide blockbuster features a dramatic road chase on a Ducati Superbike.

The Ducati Superbike is celebrated for its design in countless museums and for its performance on racetracks all over the world. In its various versions, The Ducati Superbike has won more Superbike Championship races than the competition combined. The Ducati Monster has become a cult bike that invented a whole class of motorcycle: the sport naked bike. The Ducati Monster Matrix 620 tweaks the category with a spectacular "Matrix" livery, special paint and graphics. It is instantly the most desirable urban street fighter around. 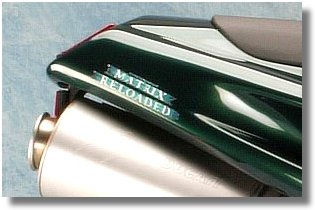 "Ducati is thrilled to be a part of this hugely exciting film franchise," said David Gross, Ducati Creative Director. "The Matrix Superbike and the Monster Matrix 620 capture all of the thrill of high performance sport motorcycling and the spirit of `The Matrix.' Sport bikes and blockbuster movies just don't get any bigger than this."

"We were pleased to use Ducati Superbikes in creating the unprecedented Freeway Chase sequence in `The Matrix Reloaded', and we're even more excited that two Ducati motorcycles inspired by the film will now be available to our fans," said Joel Silver, producer of the "Matrix" trilogy. "Like the visionary action and visceral storytelling that power the Wachowski Brothers' trilogy, Ducati motorcycles represent innovation, singular style and cutting-edge performance."

This fall, Ducati will celebrate the launch of the Ducati Matrix motorcycles and "The Matrix Reloaded" DVD with a series of global events. In the Netherlands, the retailer Bijenkorf, the leading specialty retailer in Holland, will display the Ducati Matrix 998 at their flagship location in Amsterdam at DAM Square, across from the Palace. Ducati France will launch "The Matrix" night during the week of the Paris Motor Show from the 25th of September to the 5th of October. 400,000 visitors are expected.

Founded in 1926, Ducati builds racing-inspired motorcycles characterized by unique engine features, innovative design, advanced engineering and overall technical excellence. Ducati has won eleven of the last thirteen World Superbike Championship titles and more individual victories than the competition put together. The Company produces motorcycles in four market segments which vary in their technical and design features and intended customers: Superbike, Supersport; Monster, Sport Touring and Multistrada. The Company's motorcycles are sold in more than 40 countries worldwide, with a primary focus in the Western European and North American markets. For more information about the Company, please visit our web site at www.ducati.com.

This press release contains statements that are forward-looking and are subject to a number of risks and uncertainties that could cause actual results to differ materially from those anticipated, as described in documents previously filed by the Company with CONSOB and with the U.S. Securities and Exchange Commission.

"Matrix," characters, names and all related indicia are trademarks of and (C) Warner Bros. Entertainment Inc.

I've gotta get me one of these!!

its cute, but i like Harleys, those are the only bikes for me. The logo is the only thing i like..put that on a Harley...neat!


Posted by: trinity on September 16, 2003 10:34 PM
What's on your mind?.....
(new here? please read this before commenting)
Remember, this is a fan site.
Keanu Reeves is in no way connnected to this website.
Please do not make a comment thinking he will read it.
Comments are for discussion with other fans.
Thank you.