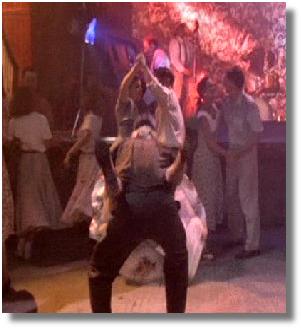 I love watching Keanu dance. He's got such a natural rhythm and grace of movement that it's not suprising how he took to the choreographed fighting in the Matrix films (I offer the Tea House fight with Seraph as a prime example).
I was a little suprised to learn that he needed dance lessons for Sweet November, maybe he just needed a little brushing up.
The jail scene in the Replacements always makes me smile, but I think my favorite Keanu dancing is as Winston getting funky in The Night Before. Oh baby boy....

And this segues us into the next track for the K-mix:

Spice Girls - If You Can't Dance (right click and save please, don't stream)

Now we got the flavour, the bad behaviour,
the rhythm the melody, the juice for you to savour,
rockin' and vibing somebody is jivin',
You need to take a tip, sort it out,
Get a grip whenever I go out wherever it may be,
There never is a Keanu but a dweeb lookin'at me
but even if I did score he's a loser on the dance floor,
Take a deep breath count 1 2 3.

Even when his eyes met mine
his slamming shoes were out of time,
Can't you just feel the groove
why don't you move,
it's easy can't you see,
take my hand and dance with me

I wonder how that notation in some of his bios which states that he "loves ballroom dancing" came to be - a joke on his part? An early padding of his resume? Otherwise why would he need the coach for SN. I believe someone (Nettie?) was told (by John Gaeta?)in Cannes that "Keanu doesn't dance." I would imagine he does dance off-screen, when the opportunity presents itself (not just horizontally) but in a romantic, private situation. You know, in the shower. ;)

PS: If the Cannes story is inaccurate, I apologize.

Yeah, in a romantic, private situation with me...in my dreams.

Sorry but I am not getting today's picture...is it from a film? It's sorta blurry on my screen... I haven't seen Sweet November yet, is that what it's from?

Keanu said in a bunch of interviews (especially around the 'Speed' era time and before) that he was taking ballroom dancing lessons. It might have been for a movie role (did Dracula have dancing scenes or was that just so the actors got to know each other better? I remember reading that Francis F. Coppola had the actors do a series of improvs and things of like ilk (hot air ballooning, horseback riding etc...) to get better acquainted). Or maybe it was to have more grace as an actor? I guess only Keanu knows. He hasn't mentioned dancing in awhile (as one of his favorite things to do), but I know in earlier interviews that he did. Just full of useless info. aren't I? :O) LOL I think the boy has some rhythm and can get down when the occasion calls for it. ;O)

bakednudel, It's a screen capture from the movie
Tune in Tomorrow.

I wanted to see if I could find a few pics with both dancing and ass for today, but was too tired by the time I got home last night.

which film does that pic come from? i've never seen him dance.

Thanks, Natasha. The Speed era was before my time of enchantment, so I really didn't see any interviews with him from then. That makes it even more weird that he would have to have lessons for the little bit of dancing in SN.

WINSTON!!!!!! Weehee, I LOVE the move when he drags her on the dancefloor :-D Hahaha, that's not excactly graceful :-)
And OH! The dance-scene in Tune in tomorrow is a hoot, too! - and called 'Aunt *Julia* & the scriptwriter' in Europe which is even better. I actually always find his dance-scenes funny instead of graceful, but maybe that's just me -
Ok, you can all smack me now :-)

Thanks, krix, for giving us the Dancing Ass today!
BTW, Winston getting funky is on a par with Nelson singing... makes me wanna reach for a glass of wine to drown my laughter in drink...

Same here Julie. Funny. But he's always graceful, just not in the he's-a-good-dancer sort of way. Although he did dance very well in The Night Before. My favourite dance moment.

Yeah, I probably shouldn't have used the word "grace". But he's got amazing physical control and awareness, whether it's dancing or fighting or a kind of physical comedy.

I hope he gets to exploit his knack for that in one of the upcoming films, maybe Thumbsucker.

I think grace is the right word - the Wachowskis used grace to describe his movements on the roof with bullet time. It didn't look right with his stand in (Chad? Darko? don't know) but when Keanu did the backward movement it was graceful and it worked.

Yes, grace...he does this kungfu thing with his hands in The Matrix that just turns me into a puddle. Guys that have graceful hands without being swish (not that there's anything wrong with that) just...argh...speechless.

I'm sure that if he wanted to dance he could pick it up easily. The man is graceful. Of course I love to watch his jock-ish running too...argh.

I LOVE the running too. I'm guessing "swish" means effeminate ?

Yeah, sorry I wasn't tactful. What I was trying to say is straight men who have graceful hands just do something weird and wonderful to me. I like a combination of masculine strength and grace. Does that make sense?

I think Keanu is an excellent dancer too! I just wish he did it more in his movies.

Bring back the days of Fred'n'Ginger.

I got you bakednudel. I just wasn't familiar with the expression "swish". Is it British?

Dance, dance, wherever you may be
I am the Lord of the Dance, you see!
I live in you, and you live in me
And I lead you all in the Dance, said he!

...from Hellblazer story, Dire Fates. Lord of the Dance'S pub is in London. Known for its happy, contagious mood of contentment and joviality by both the inspired past genius of this world (such as Shakespeake, DaVinci, Einstein) as well as the other-worldly characters that John Constantine typically encounters.

Posted by: phoenix IX on September 14, 2003 03:59 PM
What's on your mind?.....
(new here? please read this before commenting)
Remember, this is a fan site.
Keanu Reeves is in no way connnected to this website.
Please do not make a comment thinking he will read it.
Comments are for discussion with other fans.
Thank you.