Counting down to the Jack Bauer Power Hour 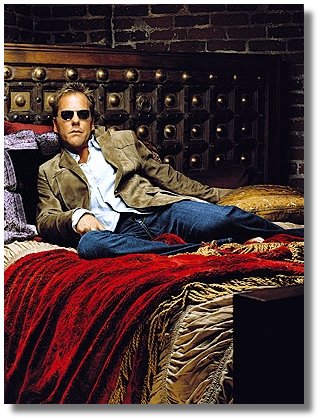 Less than two weeks until the new season of 24 begins and I'm nearly as excited about that as I am about Revolutions.

I loves me some Kiefer.

That is the sweetest most sexy pic I have seen of him in awhile. Dear god *drool*

I even salivated from the Phone Booth trailers when they were on tv. How sick is that?

Just last night the husb and I were ruminating about what the heck is on Tuesdays at nine until the 28th.

I know. Damn BASEBALL is holding up the start of my favorite show.
It's been like that every year, though and I can't complain much seeing as how we get a full 24 episodes every season without any re-runs.

It would seem that krix has a thing for Canadian men! Not that there's anything wrong with that. ;)

By the way, does Keifer speak French ? I've heard daddy Donald speak it quite a few times and he's pretty good.

I don't know, but I can just imagine that velvet voice of his....

I just love Keifer...what is it with the "K" names girls? Haha...before I knew who Keanu actually was...I saw Keifer in "The Lost Boys" and he was the first actor I actually liked alot...until the Reevester came along...now he's my number one...But hey..."Brotherhood of Justice" is wonderful...Keanu and Keifer in the same movie....******DROOL******

just got my season 2 dvd in the mail yesterday, along with Reloaded (yes, i'm the idiot doing all the preorders at Amazon...). two things stop conversation in front of my tv - the trailer for Revolutions, and the ad for 24. jackisback!!! (almost)

Did you see the new TV Guide? It has a really nice picture of Kiefer on the contents page. I don't have a scanner, or I'd e-mail it to you. If you don't have it, you might want to look at the grocery counter, because you will like what you see. It's on the first page. He's on the cover, and, of course, there's an article with a couple of pictures too, but the one I'm talkin bout is the best one.

Isn't the Matrix going to be on a tv guide cover too (like with Neo and Trinity)?? I swore I saw it briefly on some tv show or something (somewhere??)?? Maybe that's next week? And Keanu will be on Letterman on October 29th! Yay! :O)

wow, what a great pic. the only thing missing is the disco ball above the bed and barry white on the 'hi-fi'. hee

Keifer crush huh? Wish I had a camera with me this morning. Picture this: Union Station - Toronto - rush hour crowds - large latte in hand (ie. breakfast) - through the doors and WHAM - Keifer's face. I mean, a WHOLE wall of Keifer's face, at least 12 feet high. Promo for 24 is really ramping up here. If I can remember to bring my digital next week and it's still there, I'll send you a pic.


Posted by: symbiosis on October 17, 2003 05:18 PM
What's on your mind?.....
(new here? please read this before commenting)
Remember, this is a fan site.
Keanu Reeves is in no way connnected to this website.
Please do not make a comment thinking he will read it.
Comments are for discussion with other fans.
Thank you.