Keanu and Paulie are quoted in an article on the SCORE game for USA Today.
(Doh! Broken link fixed) 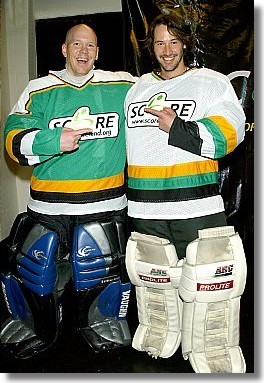 And on a related note, anyone hear how the Viper gig went last night?

With the flooding and everything here in Vegas, I would have been better off staying in LA for the show.
I stayed away from the high water, but traffic was horrendous and I had no power last night. I ended up going to dinner and a movie by myself since no one wanted to brave the roads to meet me.
I saw Freaky Friday, which was amusing. I figured since Jamie Lee's "one of us" it was worth paying for.

There's another flood warning today, so I'm trying to get my work done so I can leave early.

You poor thing - no power in this heat. Arghhhhhh!

Stay safe, cool and dry. Thanks again for all the FAB reports/pics from the S.C.O.R.E game the other night.

Jamie Lee Curtis was interviewed at the Teen Choice awards and confessed that she had once written keanu a fan letter. The interviewer called him over and told him, and he blushed and gave Jamie Lee a kiss. I didn't see it, but I hear it was really cute.

(link added to the entry)

Hello, I love your site! Hey, I live on the east coast, and Id brave the waters with ya anytime!! I hope that things are better today! I want to see "Freaky Friday" too! Im glad you gave it good reviews, it looks awesome! Take Care!

For a movie that everyone knows the plot to already, it was pretty entertaining. The boy in it is really cute.

Talk about power problems...I live in Cleveland Ohio!!! sheesh...Bummer I missed the game AND the show. I sooo need an airplane-biz-friend! Ditto on the thanks for the game reports and pics. You're the best...

I saw Freaky Friday and LOVED it. I bawled at the end.

I totally missed the interview with Jamie Lee at the Teen Choice Awards. Would you believe I was actually on the Net at THIS very site when it aired? My husband yelled for me to come down to see Keanu, but by the time I did it was too late. :( He gave me a play by play which was nice. I always knew that woman rocked.

Hey Krix:
Thanks for the quick response. Love this site, what happened to your sims? My friends and I couldn't stop laughing and hope to see more.

Anyone know when the next becky show is? I would love to hit one up some time.

I got a little burnt out on the Sims, I need a new expansion pack. I tried to make a becky band house but was too lazy to build a new lot so I just murdered the Goth family and moved them in to that house. But all "Charlie" and Rob do is stand around weeping for the former residents.

I know the feeling, I got annoyed with the constant buzzing of flies and trashed it.
Anyway, keep up the great work!

I chose not to go to the Viper room because it was a late gig on a worknight. Maybe next time... If you come out for a gig, let me know and I'll come out!

followed links from here and there to your site - very cute - good job! just wanted to give u a report on the becky show...it was good fun. 1st time ive seen them actually. i worked on rebecca lords season of real world, and was shocked to find she was in a band with keanu...i work in the tv/movie business, so i got myself on the list (not necessary - wasn't too crowded!) and checked out the scene. man, rebecca still has a great voice and KICKED SOME BUTT! i brought a male friend with me and he marvelled over k's fab haircut. does anyone know where he gets it cut? it really is good. a great band named cheerleader opened up - like a neo ramones. they're from toronto - check them out if you're in the l.a. area...next time, i'll infiltrate the VIP lounge and give full reports from the front. i'd like to say again, you have one of the best fansites i've ever seen.

Wow, Hi and thank you for the show report and your kind words, indbiz :)

Not sure about where Keanu gets his hair cut, I always assumed he had it done for whatever role he was working on by the studio stylists and just let it go between films. I wouldn't be suprised if it just grows out shaggy perfectly in a way that other people pay big $$$ for.

Posted by: krix on August 23, 2003 09:55 AM
What's on your mind?.....
(new here? please read this before commenting)
Remember, this is a fan site.
Keanu Reeves is in no way connnected to this website.
Please do not make a comment thinking he will read it.
Comments are for discussion with other fans.
Thank you.