Keanu Refuses To Lighten Up

August 1, 2003 (WENN via COMTEX) -- THE MATRIX hero KEANU REEVES is refusing to bleach his hair blond for an upcoming movie role. The naturally dark-haired actor has been urged by producers of CONSTANTINE to go lighter, but he is not convinced.

Esqueeze me, when did Keanu become concerned about his looks when it came to a role? This is the guy that shaved everything for the Matrix, and then went out and played gigs. Frankly, I can't see him getting all diva over a little frost-n-tip.

Let's look at some questionable movie do's, shall we?

Little Buddha was a screamfest of bad hair don'ts, this one being the one that squicks me out most. 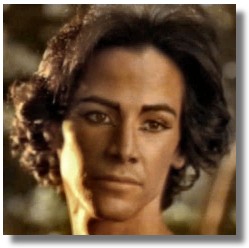 Oh, no...He doesn't look like a cross between a goth Nancy Reagan and a crackhead June Cleaver here at all.

Then there's Marlon. Whose bad hair was completely intentional and part of the character. 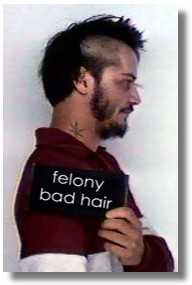 But it's still pretty fucking bad.
(Actually, I just watched ILYTD last weekend, and a bigger affront to fashion is Marlon's pants)

OH! And don't get me started on the roadkill they strapped to his head at the end of Feeling Minnesota. 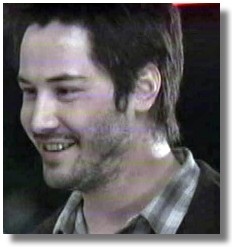 This one is a good argument that "YES! of course the blonde wigs looked stupid. ALL WIGS LOOK STUPID." But a gradual lightening won't be a shock and it would work.

It's not like he's weird about his hair, from fan reports and pictures from Oregon, it sounds like he may have gotten some extensions for Thumbsucker.
I'm actually hoping we'll see him in a seedy hippy ponytail, to be honest.
I like seeing him break from the expected and the norm. I think that was why he was so riveting as Donnie Barksdale.

So I don't believe the article for a minute. The shame is, now that this is out there, even if it wasn't his idea but they do decide to keep his dark hair, the comic fans will blame it on Keanu.
I've been reading the forums and they STILL can not accept that he's playing their beloved "ConJob".

I really want to see him with light hair. And more importantly, fans of Hellblazer practically require it. And while I've made a few attempts in photoshop to lighten him up and will admit that it's not as easy as it sounds, don't tell me that a team of Warner Brothers' stylists couldn't make it happen. He doesn't have to go completely blonde, but something like taken a little bit further this would work. 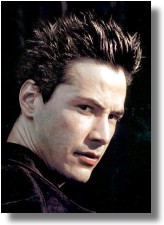 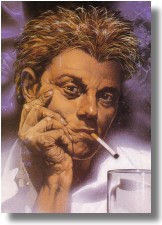 I just think it's very important, especially after they are changing SO MANY other aspects of this character to at least try to vary from Keanu's dark locks. As an actor I would think he would be up for it.

I guess we will wait and see.
Ultimately I really can't see Keanu refusing something like this on the basis of how he looks.

all these hair-dos look pretty dramatic but agree we've never seen Keanu change his hair color too much... it's always dark/almost black at times. I'd still give the article a benefit of a doubt.

I don't believe the article either. I honestly believe that he would do whatever for a role the pictures yopu posted case in point. And, as all women know, if you don't like the color you dye it, you can dye it back just as fast...lol

ROFLMAO - You are too funny!

All that he's done to his hair in the past, there's no freakin' way blonde could be that bad. And YES, the Feeling Minnesota do was horrible.

I rarely believe anything from the British press and like you pointed out krix, Keanu has gone to extremes to change his appearance in other movies. To insist not to do this makes him sound a tad vain.
Having said that, I hope they keep it black, my own personal preference of course. The comic book forum guys won't want him to play that part no matter what, hair color, accent, etc. And since I've never even heard of this comic, makes no dif to me. It's all new to me. I'd still go see him if his hair was purple. :)

Don't get me wrong, I LOVE his locks!

Oh, I love his dark hair as well, and I admit with his coloring it will be tricky to get a tone that looks right, but I am always interested in seeing him stretch with something different. And it's not like it's plastic surgery or anything, it's a little peroxide that will grow out, can be cut off or dyed back.

the best way I think to make him blond is first to dye his hair light brown, and then put some lighter highlights in. I have a feeling that would look delicious, for a season at least.

In fact, I have a friend that looks absolutely like Keanu with light brown hair! Too bad he -my friend- is already married....and Keanu is so out of reach ...so I am all out of luck, what the ***K!

I mentioned on a couple of other sites that yet another change to this character and storyline was just asking for trouble, and was overwhelmed by all those in favor of leaving his hair alone. You've got some great arguements for change in showing those past characters up there, Krix. He's an actor. He's supposed to change his looks. He's changed his looks in just about every role, even if it's only to buff up. If the blonde wigs look bad, lighten his real hair. It doesn't have to be all over yellow or platinum blonde, but lighten it a bit to get the proper look and be done with it. Then dye it back.

I'm glad I'm not alone in believing that not changing his hair is a huge mistake. The outcome will be interesting, and yes, maybe all things reported aren't necessarily an accurate story of what's really going on, but if all these changes are true, they may as well not even call this "Constantine."

Wow Krix. He actually doesn't look that bad with your photoshop hightlights. Kewl.

You totally forgot the totally heinous hair crime from Parenthood...

He shaved his head, AND his eyebrows for The Matrix. Like he's going to scoff over a bit of blond. I so don't believe this one. If anyone has ever NOT been concerned about his looks, it's this guy. Now if the story were about Tom Cruise...

I agree with those who say that NOT going blonde is a mistake. I suspect that this story was probably a plant - one of the blurbs in a long line of blurbs to increase public awareness about the project. They do that and the story truly is harmless.

I'm sure, if they want him to be blonde, they'll find a shade and style he can live with. As far as looking ugly, just look what the NOSE did for Nicole Kidman.

I don't believe this article. He appears to be quite a professional and would do whatever it takes to get the job done. Oh and I would like to comment on that Feeling Minnesota hairdo!! I just watched this movie last night for the 100th time and that hairdo makes me want to throw-up everytime that I see it. Can anyone explain to me why they did that? Did something happen to his real hair?
Signed,

Lisa, I am no authority, but maybe the scene in Las Vegas was shot a while after the other filming was done. Since he had his bike accident in '96 - he had part of his head shaved then, so that would explain having to use this sedated wombat on his head. SURELY there was money to by a decent wig, indie film or not. Either they didn't let him look in the mirror, or his medication was blurring his vision.

Thanks, Chianti. You may have hit the nail on the head. Your explanation makes a lot of sense and is also quite funny. Did they think no one would notice because it is not a very lengthy scene??(were they ever wrong or what!!!)

[DELETED - do not post adverts my comments]- The Management

Posted by: DIANA DUDAS on September 19, 2003 07:53 AM
What's on your mind?.....
(new here? please read this before commenting)
Remember, this is a fan site.
Keanu Reeves is in no way connnected to this website.
Please do not make a comment thinking he will read it.
Comments are for discussion with other fans.
Thank you.