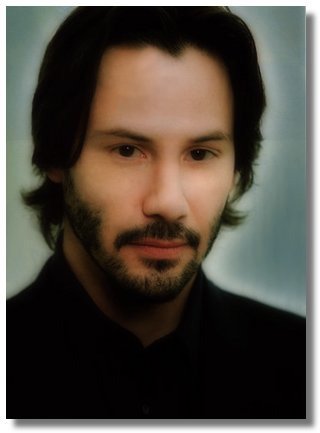 Big Love to Jena for typing up this interview with Keanu from Starburst Magazine, June 2003 Issue 300


In a revealing interview, Keanu Reeves talks about his role as Neo in The Matrix Reloaded
Report by Judy Sloane

The figurehead of the Matrix movies is undoubtedly Keanu Reeves. The actor is the series' greatest supporter, giving up part of his fee to assist directors Andy and Larry Wachowski in completing their vision. He rarely gives interviews, but here he reveals his in-depth feelings about his character Neo, and the secrets of the Matrix...

How do you decide which sequels to do and which not to do?


It depends on how I feel, and the scripts. With Speed 2, if there had been a really good script and I had been in a place to do it, I would have done it, but at that time it wasn't something that I wanted to do. But in terms of these, the scripts were great and I had such a great experience and faith and belief in Andrew and Larry Wachowski, the writers and directors, that I just said yes...


What was the experience like when the script showed up?

I was in Chicago when I got the two scripts. I sat down and read them and thought they were very moving and exciting and original and I thought the guys did an incredible job. There are some great surprises in there.


Jada Pinkett told us you had a whole truckload of Harleys delivered to the set as gifts...

There is a fight where Neo confronts Smith and Smith confronts Neo. Actually, it's Smith confronts Neo. And I worked basically with 12 stuntmen for about three weeks intensely, going through the fight. Then we filmed for almost a month every day. And these guys just...every time I said let's do it again, there is this one scene where Neo gets grabbed by two agents and I do a back flip and kick two guys in th head, and flip back and then the two guys get thrown back. Well those guys got pulled into the floor 21 times. And everytime I said I would like to do it again, I was like 'Tim, you okay?' He's like, 'Yeah, man. Let's go.' And we would just go through the fight every day, the three stages of the fight, and everyone was so supportive and helpful. You know, we were doing that sequence, and oftentimes in the first part of that sequence, it's a steadicam. It was doing a 180 degree turn and I've got in some of those sequences 30 moves, 25 moves, one, two, three, four, five, six and I'm hitting eight guys. So they all had to be in the right spot to sell every hit. They'd come here and then go there. We all had to adjust. So we were all in this thing for like three months and we were training together beforehand. So I just wanted something - besides just saying 'thank you' - that was somehow a bigger thank you to all those guys who helped me make this one of the great movie fights in the history of cinema. So I worked it out and they put these bikes together for me and I had them brought up in a truck. And I got to give 'em all a Harley! Which was hot...That made me smile man, for fuckin' months! I'd be in bed and be like 'Ha ha ha...'

I have to ask you about the rumour that you gave up part of your paycheck to help the production?

I put part of what was given in my contract to create a pool, so that the other people who don't usually do profit participation could see some money.


Why did you do that?

Because I wanted to.

Was the revelation about the Oracle a surprise to you?

Well, just because it's important. It was my job to do whatever the brothers asked me to do. So, I'm just trying to do that.

So you don't think you were hard on yourself?

I can be. But I don't think I need therapy or anything. I am not so out of my mind. But it's an aspect of the piece that we work so hard to get the emotional aspects right. You want those sequences to have symmetry, emotion and action. You want to believe it. If I don't hit it right or it doesn't look right, you feel it and see it and go 'Awww...!' You want it to be perfect.

Did you ever think there was too much fighting or did you want more? What's the difference between this one and the last one in terms of fighting?

Do you ever worry about stereotyping? Being stereotyped in certain roles?

No. I mean, I would worry about that if I kept playing the same role, but then I would be stereotyping myself. It's something I hope I can avoid doing.

At what point in your life did you learn to fight?

Well, it got me into track and field. No, I'm kidding. I didn't grow up in a situation where there was much fighting going on. There was like schoolyard fighting and that kind of stuff. You know, like that weird 3rd, 4th, 5th, 6th, 7th, 8th grade fighting. Then when I got into High School, fighting became a lot more serious, so people didn't do it as often. Before then it was just schoolyard shit...'I'm gonna beat you up after class!'

Did that ever happen?

Now you know how to fight, are you settling a few scores?

Only in the movies! [laughs]

Can you compare Neo with John Constantine [the comic book detective that Keanu is going to play in a new movie]?

They are very similar. I think they are actually very similar. Maybe I am stereotyping myself! [laughs] But I don't mind it this time.

How beat up were you in this movie? We've heard about ice-packs...

This one was much harder! It took more time. There was much more involved. It demanded a lot more. In the first one I could do most of it. In the second one, if you take out the CGI aspect of my fight with Smith, I am doing probably 92 per cent of my fighting. Not the landings, not the wall shit and crashes, but the fighting. But there was a lot of stuff with the weapons, I was like 'I wish I could have been better. I wish I could have done this move...' because the more I would get, the more that Wu-Ping and the brothers would go, 'Well how about this...?' There was a lot of that, so we didn't have enough time. It was harder to do and it was harder to come back. Some days, you'd finish a fight and then getting new choreography and fighting on weekends so that you could film on Tuesday.

Were you sick of the fighting by the end or did you want to come back and do more?

You know, I didn't think like that when I was doing it. I just kept thinking 'this is what I have to do'. Once I threw my last kick and my last punch it was like, 'OK, we did it. I hope I did it well enough'.

That's when you reached for the bottle of scotch?

What was it there for?

Because it was just there. And there were some Fridays when you would finish work and just a glass of scotch after some filming and some fightin' is really good. You know what I mean? It's like that beer after you've been liftin' shit. Like yeah.

Once in a while, I read a book or two. But I can't go in and teach Comparative Literature of the 20th century!

Did you listen to Rush in preparation for this role?

No. I didn't do any Rush this time...But I just read a great book about punk rock. Have you read Please Kill Me? Is that a great book? It's awesome, it's inspiring. I highly recommend that.

But did you pick something up from playing him?

Tornoto is in crisis now with the SARS virus. Any thoughts?

I should call people and see what's going on. I know that politically they're in negotiations wiht the World Health Organization trying to get the quarantine off. Then they've just had two new cases. So I don't know what kind of situation that has put them into. I don't know what it is like day-to-day. It's a weird epidemic aspect.

Can we get an update from you on your band?

What would you say sets this film apart from the first one?

Did it bother you at all to have a CG stunt double do anything?

No, it doesn't bother me. I wish I could do what my CGI Neo does. It would be fun to fly.

Will you do more than one Constantine?

Good God, man, I haven't even made the movie.

I just wish- and this is horrible to say- but I just wish Detroit was still playing hockey. And Colorado. Because I love the way they play hockey. I mean, I love the hockey that they play. Just that passing and the inventiveness of how they play the game. I love that hockey!

I'm sure we have heard parts of this before, but I think a lot is covered in this and wanted to archive it. (plus I have been searching for a particular quote for over a week and it's in here) media spot | from inside the mind of krix at July 12, 2003 11:14 PM .

incredible article, thanks jena!!!! I'm glad they asked him about constantine since I have been wondering much about that pigeonholing thing, he can pull it off tho, I know he can.
lovely pic too!

(Re:Judy's comment on the above entry)
You know what? It's possible that I screwed up his nose a little bit when I brushed out the lettering that was across his face that bled thru the scan. I'll have a look at the original pic.
That might be why you don't like it either, Jen.
I'll see if I can fix it later today.

This picture is makeing me howl with laughter, esp after your last comment...LOL

The pic is just *wrong* not matter what you did to it...

Posted by: Keanuette on July 14, 2003 04:43 PM
What's on your mind?.....
(new here? please read this before commenting)
Remember, this is a fan site.
Keanu Reeves is in no way connnected to this website.
Please do not make a comment thinking he will read it.
Comments are for discussion with other fans.
Thank you.