I haven't had a cigarette in seventeen days 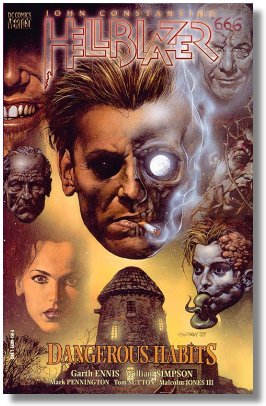 So, I came across this script review of Constantine that has some serious spoilers (Via insanerantings.com). Naturally, I couldn't help reading it AND ordering the Garth Ennis storyline that it mentions.

Anyhoo, as far as the script review goes, I think it might be a little stale as it doesn't mention the casting of Keanu at all and it has the action set in New York (I think it's LA now) but I don't imagine the core of the thing has changed much. The writer, Hollyfeld, brings up some interesting points about the movie and movie-making in general ("exposition girl", Bwah!).

OK, I have to rant about something that would definitely be considered a spoiler, so don't click the extended entry if you haven't read the script review and don't want to know...
(also remember that clicking "comment" will open up the whole page so scroll quickly past the second half)

Reason #823 why I fucking hate Hollywood:

"But the worst of the seemingly superficial changes, in my mind, is that in the screenplay, John’s cancer has changed from being in his lungs, to being in his brain. Yes, that may seem small, but it played an integral part in the 'Dangerous Habits' storyline. John was being undone by his own conscious actions. He knew that smoking was bad for him, he did it anyway, and he is paying the price. This mirrored perfectly the fact that he was going to Hell. He knew the difference between right and wrong, he did bad things anyway, and he will pay the price. By taking away that his cancer is his own doing, he goes from being the flawed anti-hero to a martyr, and the last person John Constantine can be compared to is Jesus Christ. Maybe the Marlboro people got to the screenwriter, maybe not, but it feels like a completely unnecessary, entirely detrimental change in an otherwise fantastic subplot."

Augh! I'm not even a longtime reader of the comic and this pisses me off. It's one thing to change a character's hair color or accent, but to me this is important. If this movie sucks, it won't be because Constantine/Hellblazer wasn't a viable property, and it won't be because of Keanu. It will be because once again, Hollywood has taken a good idea and a good property and fucked with it beyond recognition in order to make it fit into some sort of formula. And by formula, I also mean pablum. Pre-chewed and digested with no sharp edges for our (and by "our" I don't mean us, I mean those other bitches) delicate sensibilities.

Now I'm all riled up.

And I can't have a cigarette.

Keep up the not-smoking thing krix; if possible your stuff is even funnier laced with nicotine withdrawal. Plus you'll last longer! :o)

Why on earth does "hollywood" want to make all these changes? This just makes no sense to me either. I know absolutely nothing about this comic, but it certainly seems like an important part to be changing. True fans won't even know what they watching once it is all said and done. On a happier note....congrats on your 17 smoke-free days!!Keep up the good work, in the long run it is worth it!!

Got your e-mail, Krix, thanks a lot!!!
Do you know what the hell is keeping the Biography channel to show Keanu's biography???? They keep rescheduling/cancelling it, a bunch of liars!

like i keep saying, this Constantine thing is just. a. bad. idea! let me count the ways - nah, you've heard it all from me before...

Keep the faith krix. I'm sure the movie will be good. I think after The Watcher Keanu is being more careful about the roles he accepts. *crosses fingers behind her back*

Congrats on not smoking, Krix. It does get easier, but it takes a long time. The behavior modification is worse than the physical withdrawal IMO.

Regarding Constantine having brain cancer, I totally agree with you. I can't help but wonder if Mr. Reeves knows about this (not so subtle) change?

Congrats on the non smoking.. it'll be 2 years for me in september after smoking since I was 17.. I'm 30 now.. so count that LOL... and I quit cold turkey.. it's hard, you'll have a craving here and there, and you'll miss it..especially the hand to mouth thing.. but you'll feel better about yourself..Keep up the great work!!

Thanks for the support on the not smoking, guys.
BTW, I PROMISE to never ever become a jerk of a non-smoker. In fact if I ever do that hand-wave-sniff-sniff thing, you have permission to pour your drink on my head.

Something inside me says that if Keanu knew about this particular change, especially if it were put to him in the way that the review explains it, he might have some say about it. Although I understand the ridiculousness of the anti-smoking brigade in H'wood is out of control and as much pull as he has, he may not be able to do a thing. A friend and LOTR fan told me that they wanted to take away Gandalf's pipe!
Idiots.

It seems to me that the "powers that be" would want to keep the lung cancer in to illustrate a point - he smokes = he got lung cancer. (It's not a given, but its a pretty horrendous possibility.)

I just dont get the swapping it for brain cancer. There must be a good reason. (I, ever the optimist.) I think that he is excited about this part for a reason and I trust his judgment.

I do agree that perhaps a bit of naivete on the dear boy's part got him into The Watcher, and that he probably is paying much more attention to detail these days. Ever on the lookout for so-called friends who screw him over could be one lesson learned, but I doubt that the circumstances surrounding The Watcher fiasco would occur again. From what I read about it, that was a once in a lifetime former-friend-screw-over.

Keep going on the no-smoking! You're making huge progress.

I hate it that they are so drastically changing Constantine's character.

congrats on the firm resolve to not smoke. A major accomplishment! // and thanx for the Constantine info...

Afterthoughts: I don't want Ke to go all blond for this role (there's a difference between streaks and the total color change. That said with preference for his lovely dark locks).

And as far as your excellent comment, krix:
"Hollywood has taken a good idea and a good property and fucked with it beyond recognition
in order to make it fit into some sort of formula. And by formula, I also mean pablum.
Pre-chewed and digested with no sharp edges..."

Somehow, notions (maybe just a lot of wishful thinking on my parti) of this being an indie film -- like River's Edge or MOPI...,
with 'cutting edge" providing that much-needed cool breeze that intices us
to experience sensational personification of this character named Constantine.

Nah, Constantine is a Warner Brothers project, I *think*. It's certainly no indie film. I'd bet that the effects alone will cost more than Thumbsucker's entire budget.

And I certainly wouldn't want him to stay blonde, I'd just like to see it.

...how about this for an idea what a blonde KR would look like?

Congrats on your 'quitting' project - old habits die hard, but eventually they die... have resisted the urge for six years now!

How nice for your lungs to catch so much free air! Mine are slogging it out with a continuous assault of tar. I really must take your fine example, but I probably won't.
Greetings from LA.

Ack, and double ack. I'm a big Hellblazer fan, and as far as I'm concerned, if Constantine isn't a dirty wee blond Scouse bastard with a permanently-dangling cigarette and a cocky grin, I'm not playing. Given the utter pig's arse that the Hollywood slush-mafia appear to be making of the most basic of plot premises, this is going to be one to avoid.

lots of love to you, too, Daniel!

Posted by: phoenix IX on July 13, 2003 09:35 PM
What's on your mind?.....
(new here? please read this before commenting)
Remember, this is a fan site.
Keanu Reeves is in no way connnected to this website.
Please do not make a comment thinking he will read it.
Comments are for discussion with other fans.
Thank you.