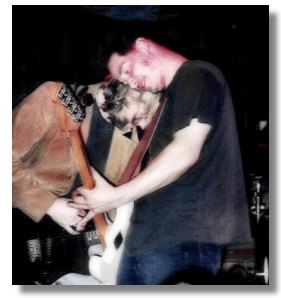 Thanks to club-keanu for the heads up on this post by Tresses at the DMB that says that Keanu and Bret will be appearing on a Mr. Big (who I have never heard of) tribute album "...very unique project in which Mr. Big classic songs have been revisited, featuring all star vocalists and guest musicians as well as the band members themselves."

Oh, in case you are wondering, Keanu is in Paris working on that Meyers thing (oh look, his character has a name: Julian. You may recall that he also played a Julian in Even Cowgirls Get the Blues, which was of course...the Worst Movie Ever....I'm just sayin'). He's also going to movie premieres and having lunch. Pics and links to pics can be found at Club-Keanu and Keanuholic.

Also, according to Lou Taylor Pucci's news page, Keanu will be arriving in Beaverton! toward the end of the month to work on Thumbsucker (why hasn't this movies IMDB page been updated?).

Re ECGTB I only watch the first 20 mins of the movie...

And Ke is playing another Julian? Geez, don't they have enough names to go around.

Adrian would be a better name..;)

I have no idea who he is either, but if Keanu and Bret are doing a song together I want that CD! But so far what I've read it will only be released in Japan.

Mr. Big is a "they", rather than a "he".
They are no longer together. Their biggest selling hit was "Just to be with you."
Also, some notable songs were, Shine, Nothing but Love, and Goin' where the wind blows.
Not a fancy, flashy band, just good rock.
A tribute album is a cool thing.

while i wholeheartedly agree that "cowgirls" is a lousy movie (the only keanumovie i don't have on vhs or dvd), i must admit i truly love the Julian Glitch scenes. our keanu is just wonderfully geeky and asthmatic...

Julian Gitche is the character "most likely to be kicked out of bed by krix". Bleh.

Mr.Big were/are musicians that are talented but weren't always in the limelight. They left that to the flashy "frontmen" (in some cases) - and just played great rock. This album sounds cool even if Keanu & Bret weren't on it. What an honor for them though! Can you say R-e-s-p-e-c-t? I knew that you could.

Ah, I see Ritchie Kotzen is a member of the band. I understand that he and Bret are very good friends.

Oh man - I used to love Mr Big when I was a kid - I think I got one of their videos still hiding in my room somewhere ! They were total hair rockers but good fun. They split up last year - their bassist was big Billy Sheehan, who used to play with Dave Lee Roth for a while and is on Steve Vai's record label.

This is a frickin great site by the way. I had one of your wallpapers from your old site on my computer for about 2 yrs until my machine eventually died and ate it. It was gorgeous.

YO! Mr. Big is fantastic!!! The´re not together anymore, but they were a GREAT hard rock band! Their bass player used to play with David Lee Roth, together with Steve Vai!!!!!
Cooll, can´t wait to hear the album!!!!

KRIX! Sorry I couldn't respond to your e-mail dated 6/27.. I am moving to a new house and my computer isn't setup yet...but yea, I am glad to accept your offer and will get back to personally you with the rest of the info in about 2-3 days!
thank you girl!!!!you're ZE BEST!

Posted by: krix on July 3, 2003 04:33 PM
What's on your mind?.....
(new here? please read this before commenting)
Remember, this is a fan site.
Keanu Reeves is in no way connnected to this website.
Please do not make a comment thinking he will read it.
Comments are for discussion with other fans.
Thank you.