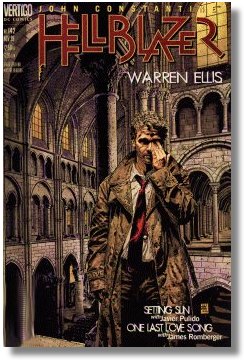 I'm eagerly awaiting an order of a few issues of Hellblazer written by Warren Ellis. I figured it would be wise to read one of his runs before I write him and ask him to comment on the upcoming movie. Here's hoping he doesn't just tell me to fuck off, although I'd surely print that email out for the scrapbook.

IGN Filmforce has some news about the movie, casting and filming (thanks keanuweb and club-k)

The news is fairly spoilerific so if you want to know more about the plot and the characters that they are currently casting, click the Filmforce quote there.

OK, so I've seen these script pages* and while you don't get a whole lot of info on the John Constantine character or anything, it does give you a feel for things.
But there's no telling how close they are to what will eventually be the final script. They are basically audition tools for the other roles in the film.

Of course, there's the female lead, Angela. I believe this character was written for the movie and not based on any of the existing comic characters. In my mind I picture Linda Fiorentino, mainly just because she looks like an Angela to me.

Then there is Beeman, who the source describes as "sort of the "Q" to Constantine's James Bond." I have no idea of the age of the character or if he is based on anyone from the comic. They just say he's "diminutive". I wouldn't be at all suprised if the put someone like Seth Green as Beeman, the role basically being the occult equivalent of a gadget geek.

Then there is Chaz, who is apparently based on a major character in the comic, Frank "Chas" Chandler (the comic fans are a little miffy about the whole "z" thing). I'm going to have to re-read some of the Hellblazer issues I have to get reaquainted with Chas. It seems like he's somewhat of a "sidekick" in the movie, so here's hoping they can find someone witch that good chemistry and timing like John Hawkes did in Hardball.

One good thing is that I've read some reactions to these pages by fans of the Hellblazer comic and a few of them have some hope that Constantine will have enough Hellblazer elements to not completely depress them. They're still not terribly enthusiastic about Keanu playing the beloved bastard, but hopefully his performance will prove them wrong.

*No, I will not post the pages or how to get them, so don't even ask. I will say that you already have enough information to find them yourself. It may not be staring you right in the face, but you have it.

Well thank you very much.

I thought they were looking for a black actress for the Angela character.

I was hoping they'd look me up!

I did 2 years of drama school...LOL

There's still hope! It hasn't been cast yet and "Hispanic and African-American actresses are reportedly being considered for this role."

I'm still waiting for them to write a co-starrring mouthy redhead role for me as well.

:-D Krix, the redhead should be Bea!

I think a behind the scenes job would be much more fun for you... Like being the visagist. Did you know that they also get to shave the actors? (so their chin does not look all stubbly all of a sudden in the next scene) *nuff said* :-D

I'd like to be in the catering section. Free drinks!

God i adore your site. I've laughed and cried and drooled over Ass Friday.

Thank you so much, Frell!
*smooches*

Posted by: krix on June 27, 2003 11:16 AM
What's on your mind?.....
(new here? please read this before commenting)
Remember, this is a fan site.
Keanu Reeves is in no way connnected to this website.
Please do not make a comment thinking he will read it.
Comments are for discussion with other fans.
Thank you.