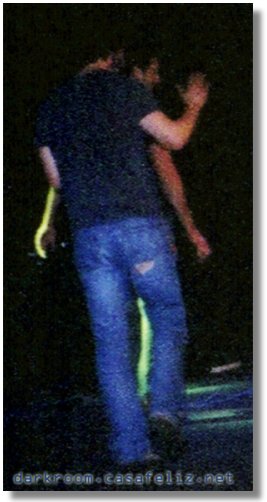 Even having the best of intentions on the LA trip, "Oooh, were going to see becky for the first time, oooooh we're supporting the band, oooooh good friends! good times!!.....", once the freaking bass player comes out showing off a cantaloupe wedge-sized peek of his fleshy underside it's really hard to focus on the music.

Here's audio proof of the effect of ripped jeans on me on the voicemonkey from that night, in case you missed it.

Of course, I wept for Ass Friday, knowing I didn't bring a camera and was not going to be able to preserve his peekaboo posterior for posterity.

But then, glee! Someone had captured the holey grail of ass, and she had it up over at the darkroom at casafeliz.net. And the coolest part is, when I wrote Shelly for permission to use the pic, I found out that we had actually met that night while waiting in line!

I love when things like that happen. It's ass-karma, that's what it is.

yeah, it always comes down to the one true thing, doesn't it, chick? yowza, indeed...

I agree. And whatta a piece of ass to have a slice in view. No doubt I, too, would have been riding my seams a little hard that evening. But then I do anyway. Result of constant visitation from a phantom. Wahoo.

Thanks for posting the pic, krix, you´ve saved my day!:D

I probably shouldn't 'fess up, but... I truly appreciate AssFridays, in general.
Definitely couldn't help but notice in Speed -- while enjoying the other
aestetically-appealing aspects of the film and rivoting plot, of course!
Ke looked as hot in his SWAT uniform as he did on the bus as a plain-clothes cop. :)
Yes, AssFriday is just a wonderful thing....

Today's pic = just a {{{sigh}}} reminder of the fun at the Becky concert the other weekend!
An AF sexyCool YAY!

That's was a bit of a result on Shelley's part.

well finally, I could not get to your site yesterday, life and glitches in my way, and I knew this friday was gonna be good.....nice to hear a recount of the show as well...shelly, is she the redhead?

Yes, I'm the red head. Glad you girls enjoyed the picture as much as I have. Just wished I'd had the guts to take my REAL camera! I can only imagine what a good shot this would have been! Damn!

After I posted that I happen to think, I'm probably not the red head you are referring to. That is Kim who was also in my group. I consider my hair red but it isn't much anymore... has gotten darker over the years and is now more of an auburn brown. I had on a black skirt and white top... long hair.

Posted by: Red on June 22, 2003 06:56 PM
What's on your mind?.....
(new here? please read this before commenting)
Remember, this is a fan site.
Keanu Reeves is in no way connnected to this website.
Please do not make a comment thinking he will read it.
Comments are for discussion with other fans.
Thank you.